The therapeutic agents currently available today for the treatment of pain usually have limited effectiveness and safety [1]. The repeated use of non-steroidal anti-inflammatory drugs (NSAIDs) may induce several adverse effects, such as gastrointestinal lesions or renal and liver failure [2]. In addition, the use of currently available analgesic agents, including opioids, is often hampered by undesired dose-limiting side effects, such as tolerance and physical dependence [3]. Therefore, research into new effective and safe analgesic agents with satisfactory tolerability and proven efficacy is urgently needed [4]. Recently, alternative agents, such as natural products, have been shown to contain richly diverse compounds, leading to discovery of compounds with medical applications, particularly in the treatment of pain [5,6,7].
Indian gooseberry (the fruits of Emblica officinalis) commonly known as ”Amla” is one of the oldest known edible fruits in India. It belongs to the family Euphorbeaceae and is native to India, Sri Lanka, Malaysia, and China [8]. The fruits are used extensively in Ayurveda medicines as a potent ”Rasayana” group of drugs, as a health-promoting and disease-preventive tonic, and as a major component of the formulation known as ”Chyawanprash”, which is one of the most popular Ayurvedic preparations [9,10].
Amla is highly nutritious and is an important dietary source of vitamin C, minerals, and amino acids. It is also contains phenolic compounds, tannins, phyllembelic acid, phyllemblin, rutin, curcuminoides, and emblicol [11]. E. officinalis extracts have also been reported to possess hypolipidemic [12,13], anti-obesity [14], anti-diabetic [15], anti-cancer [16], hepatoprotective [17], and anti-inflammatory [18] activities. A pilot clinical study showed a reduction in the total and LDL cholesterol levels, enhancement of beneficial HDL cholesterol levels, and reduction in blood levels of CRP levels, a marker of inflammation, in response to Amla supplements [19]. However, while E. officinalis extracts have been reported to exert anti-nociceptive or analgesic activities in various animal models [20,21], little is known about the analgesic effects of E. officinalis extracts on surgical incision postoperative pain or neuropathic pain in vivo models.
The present study investigated whether E. officinalis extracts exhibit analgesic effects in a model of postoperative pain generated through plantar incision (PI) [22] and on the spared nerve injury (SNI) rat model of neuropathic pain [23]. To evaluate pain-related behavior, we studied the mechanical withdrawal threshold (MWT), as measured by von Frey filaments, and examined pain-induced ultrasonic vocalization (USV) by using ultrasonic microphones [24]. In addition, pain-related cytokine levels were determined in the dorsal root ganglia (DRG) of the SNI model rats.

E. officinalis was purchased from the Himalaya Drug Company (Makali, Bangalore, India). The voucher specimen was deposited in the Research Group of Innovative Special Food, Korea Food Research Institute. E. officinalis (300 g) was extracted with 70% ethanol (3000 mL) for 4 h at 80 °C in a reflux apparatus. The process was repeated once, and the extracts were combined and filtered through a membrane filter (0.45 µm; Millipore, Billerica, MA, USA). The samples were lyophilized to yield a dark yellow powder. The yield of E. officinalis extracts was 18.8%.

PI Surgery was performed as previously described [22], with minor modifications. Briefly, rats were anaesthetized with 2% isofluorane, and a 1 cm longitudinal incision was made with a scalpel, through the skin and fascia of the plantar aspect of the paw, starting 0.5 cm from the proximal edge of the heel and extending toward the toes. The plantar is muscle was elevated and incised longitudinally. Following hemostasis via gentle pressure, the skin was opposed with two single interrupted sutures using polyamide monofilaments. The animals were allowed recovery in their home cages.

Pain-induced USV measurement was carried out in rats as previously described [25]. After induction of PI-related postoperative pain, USVs at 22–27 kHz emitted by the adult rats was monitored and scored for 10 min, using Sonotrack ultrasonic microphones (Metris B.V., KA Hoofddorp, The Netherlands) placed at a distance of 25–30 cm from the heads of the animals. The rats emitted ”calls” that were counted using Sonotrack 2.2.1 software (Metris, Hoofddorp, The Netherlands).

Surgery was performed as previously described [26], with minor modifications. The SNI procedure comprised an axotomy and ligation of the tibial and common peroneal nerves leaving the sural nerve intact. The common peroneal and the tibial nerves were tight-ligated with 5.0 silk and sectioned distal to the ligation, removing 2 ± 4 mm of the distal nerve stump. Great care was taken to avoid any contact with or stretching of the intact sural nerve. The skin was opposed with two single interrupted sutures using polyamide monofilaments. In sham controls, the sciatic nerve and its branches were identically exposed, but were neither ligated nor transected.

Animals were placed on an elevated wire grid, and the plantar surface of the paw stimulated with a series of ascending force von Frey monofilaments (Stoelting, Wood Dale, IL, USA). The threshold was taken as the lowest force that evoked a brisk withdrawal response to one of three repetitive stimuli. To determine the time course of hyperalgesia, a baseline measurement was made prior to surgery, and then again at 6 h and 24 h post-surgery for plantar incision, 3, 6, 9, 12, and 15 days post-surgery for SNI.

Incision of the plantar surface of the hind paw produced a significant reduction in the MWT, as measured using the von Frey assays. PI produced a marked mechanical hyperalgesia in the incised paw (MWT reduced from 56.22 ± 3.78 g at baseline to 0.32 ± 0.06 g 24 h after PI). The oral administration of E. officinalis extracts (300 mg/kg) and naproxen (as a positive control) significantly attenuated mechanical hyperalgesia in response to von Frey stimulation of the injured hind paw, as evidenced by increased MWT values as compared to control rats (Figure 1), and were not significantly different between E. officinalis extract- and naproxen-treated groups.

In this study, we evaluated the potential efficacy of systemic administration of E. officinalis extracts in a SNI rat model of neuropathic pain. At baseline (day 0), no significant changes were observed between the group that was treated with E. officinalis extracts and the control group. Three days post operation, animals began to show a hypersensitivity response to von Frey stimulation, which lasted throughout the study. However, administration of E. officinalis extracts (300 mg/kg) significantly attenuated hyperalgesia in response to von Frey stimulation of the hind paw, as evidenced by an increased MWT as compared to SNI-control rats, from 3 to 15 days after treatment (Figure 3).

3.4. Effects of E. officinalis Extracts on the Expression of Cytokines Induced by SNI in Rat DRG

In the present study, we examined the analgesic effect of E. officinalis extracts in PI and SNI model rats. We found that treatment of rats with E. officinalis extracts led to a reduction in the number of USVs in response to PI-related postoperative pain in rats, and to a decrease in hypersensitivity in response to von Frey stimulation of the hind paw, as evidenced by an increased MWT in the SNI-related neuropathic pain model rats. Preliminary analysis of the mechanism showed that E. officinalis extracts significantly inhibited the pain-associated pro-inflammatory cytokine levels in the DRG that were induced in response to neuropathic pain in SNI rats.
Animal models of pain play an important role in the screening and evaluation of analgesic agents. The PI model is an effective screening tool, with good reliability and predictive validity for mimicking postoperative pain in humans [22]. Incision of the plantar surface of the hind paw produced a significant reduction in MWT, as measured using the von Frey assay, and the analgesic compounds effectively reverse the incision-induced decreases in MWT for mechanical hyperalgesia [27]. As postoperative pain relief is one of the major uses of analgesics, we have previously used the PI model to test the anti-hyperalgesic effects of conventional analgesics agents, including naproxen and gabapentin [25,28]. In our current study, administration of E. officinalis extracts significantly attenuated mechanical hyperalgesia in response to von Frey stimulation of the injured hind paw, as evidenced by increased MWT values in the treated rats as compared to the control rats.
The analgesic effects of E. officinalis extracts was also confirmed by a study of the postoperative pain-induced USV using ultrasonic microphones. As vocalization is an objective and relatively easily quantifiable measure, pain-induced USV has been examined by ultrasonic microphones, in particular USV in rats. Adult rats produce two distinct types of USVs that appear to reflect the caller’s emotional state: either a positive state (a high-pitched and short circa, ca. 50 kHz USV) or a negative state (a low-pitched and longer, ca. 22 kHz USV) [29]. The 50 kHz USV tends to be produced in non-aggressive conspecific social interactions and during play [30]. The 22–27 kHz USV have been suggested to be a measure of affective shifts in rats [31], and has been used in a variety of unconditioned models, such as those reflecting a pain- and anxiety-related status [32,33]. At 6 h or 24 h after PI, the control group emitted 22–27 kHz USV calls, which reflects pain-related behavior [34]. In our study, treatment with E. officinalis extracts at 300 mg/kg reduced the number of 22–27 kHz USV calls. These results, taken together, indicate that E. officinalis extracts may have analgesic effects on PI-related postoperative pain in rats.
The neuropathic pain animal models mimic the symptoms of chronic nerve compression in humans [35]. Chronic pain animal models are commonly defined as either nerve injury or inflammation models, but a recent study suggested that inflammatory processes are important in nerve injury-induced pain [36]. Pro-inflammatory cytokines, such as IL-6 and TNF-α facilitate neuropathic pain [37] while inhibition of pro-inflammatory cytokines or administration of anti-inflammatory cytokines, such as IL-10, reduce neuropathic pain in animal models [38]. Chronic treatment with naproxen in nerve-injured rats significantly attenuated and further delayed the development of hypersensitivity by regulating the inflammatory mediators [39]. Recently, Rijsdijk et al. reported that glucocorticoids (a group of anti-inflammatory agents) significantly reduced mechanical hyperalgesia in response to von Frey stimulation of the hind paw [40], while Li et al. reported that a corticosteroid anti-inflammatory drug, triamcinolone acetonide (TA) significantly reduced mechanical hyperalgesia in response to von Frey stimulation of the hind paw, and was highly effective at reducing spinal nerve ligation (SNL)-induced cytokine increases [41]. These reports suggest that glucocorticoids can act through trans-repression of pro-inflammatory genes to down-regulate inflammatory processes, leading to a reduced production and secretion of inflammatory cytokines, such as cyclooxygenase-2 (COX-2), IL-1β, IL-2, IL-6, IL-8, IL-12, IL-18, TNF, interferons (IFNs), and inducible nitric oxide synthase (NOS) [42,43,44]. In the present study, the E. officinalis extract-treated group of SNI rats showed significantly lower IL-1β, IL-2, IL-6, and IL-12 levels and higher IL-10 levels in the DRG.
The potential analgesic effects of E. officinalis extracts are related to its bioactive compound composition, in particular to the presence of ascorbic acid [10]. E. officinalis extracts are a rich source of ascorbic acid (478.56 mg/100 mL), and the levels and the presence of complex polyphenolic components are higher than those in oranges, tangerines, or lemons [45]. Previously, the anti-inflammatory or antioxidant activity of E. officinalis extracts have been investigated, as it contains ascorbic acid, tannins, and polyphenolic constituents [46]. Evidence from in vivo and in vitro studies have reported that E. officinalis extracts modulate the acute or chronic inflammatory response via antioxidant action [47,48]. Therefore, it is also hypothesized that E. officinalis extract may exert an analgesic effect via regulation of the inflammatory processes involved in the development of neuropathic pain.

This study was supported by a grant from the Korea Food Research Institute.

J.G.K. and Y.T.K. conceived and designed the experiments; D.W.L. and Y.T.K. wrote the paper. All authors read the manuscript and approved the final version. 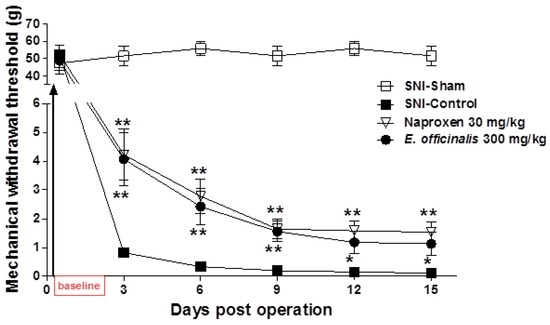 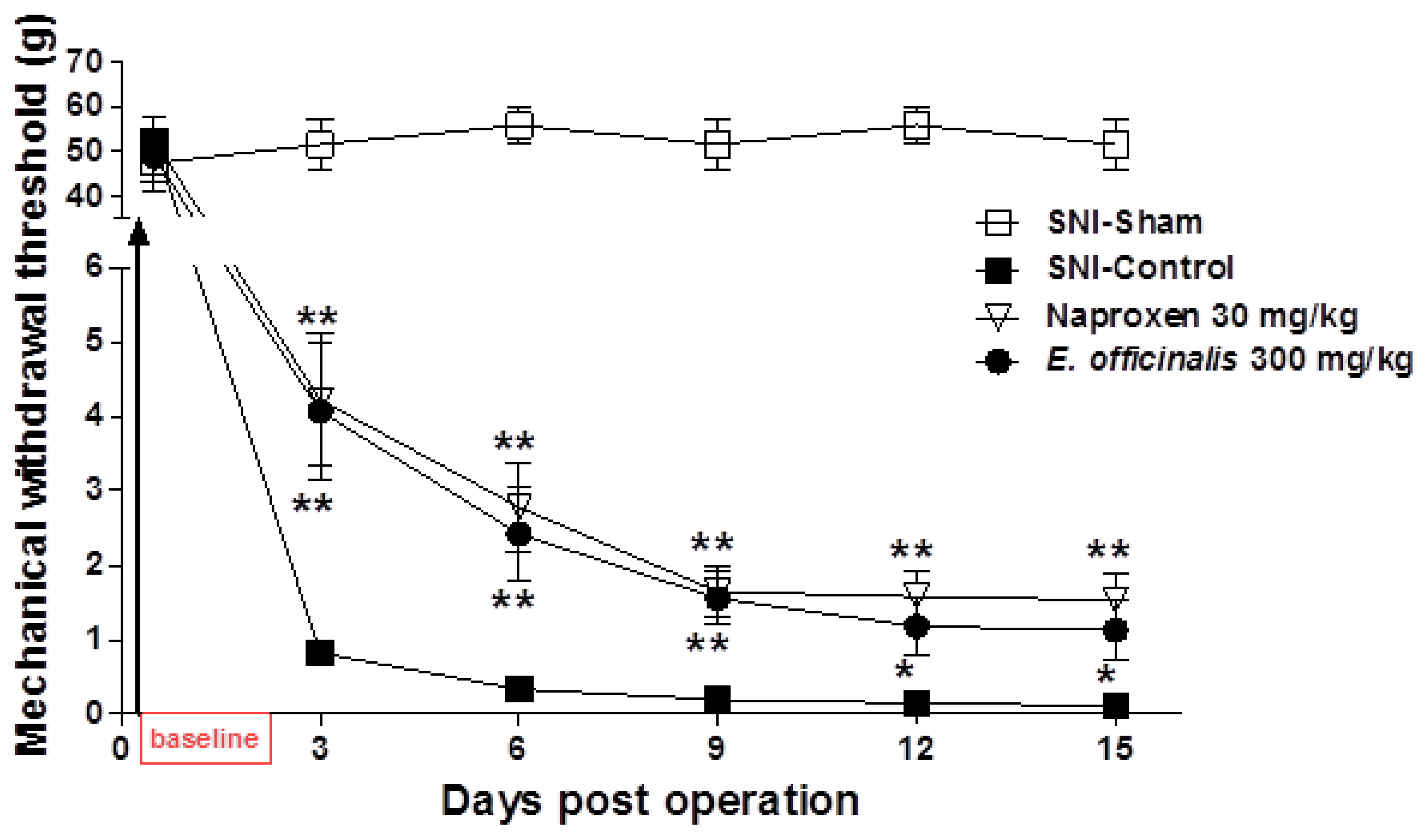