Effect of Six-Month Diet Intervention on Sleep among Overweight and Obese Men with Chronic Insomnia Symptoms: A Randomized Controlled Trial
Next Article in Special Issue

Background: Prolonged intense exercise has been associated with transient suppression of immune function and an increased risk of infections. In this context, the catabolism of amino acid tryptophan via kynurenine may play an important role. The present study examined the effect of a probiotic supplement on the incidence of upper respiratory tract infections (URTI) and the metabolism of aromatic amino acids after exhaustive aerobic exercise in trained athletes during three months of winter training. Methods: Thirty-three highly trained individuals were randomly assigned to probiotic (PRO, n = 17) or placebo (PLA, n = 16) groups using double blind procedures, receiving either 1 × 1010 colony forming units (CFU) of a multi-species probiotic (Bifidobacterium bifidum W23, Bifidobacterium lactis W51, Enterococcus faecium W54, Lactobacillus acidophilus W22, Lactobacillus brevis W63, and Lactococcus lactis W58) or placebo once per day for 12 weeks. The serum concentrations of tryptophan, phenylalanine and their primary catabolites kynurenine and tyrosine, as well as the concentration of the immune activation marker neopterin were determined at baseline and after 12 weeks, both at rest and immediately after exercise. Participants completed a daily diary to identify any infectious symptoms. Results: After 12 weeks of treatment, post-exercise tryptophan levels were lowered by 11% (a significant change) in the PLA group compared to the concentrations measured before the intervention (p = 0.02), but remained unchanged in the PRO group. The ratio of subjects taking the placebo who experienced one or more URTI symptoms was increased 2.2-fold compared to those on probiotics (PLA 0.79, PRO 0.35; p = 0.02). Conclusion: Data indicate reduced exercise-induced tryptophan degradation rates in the PRO group. Daily supplementation with probiotics limited exercise-induced drops in tryptophan levels and reduced the incidence of URTI, however, did not benefit athletic performance. View Full-Text
Keywords: intense exercise; kynurenine; tryptophan; probiotics; upper respiratory tract infections intense exercise; kynurenine; tryptophan; probiotics; upper respiratory tract infections
►▼ Show Figures 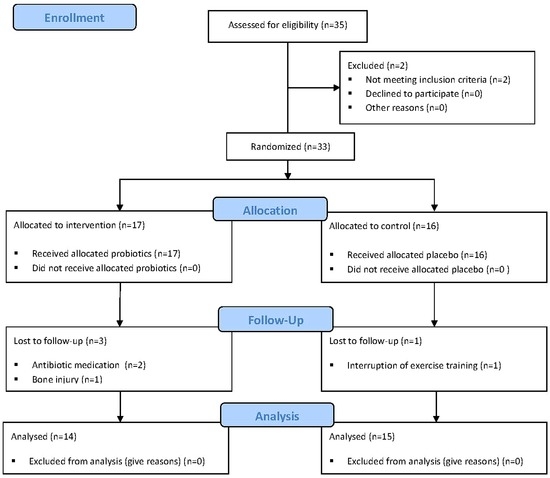