Beverage Consumption Habits around the World: The Burden of Disease Attributable to Hydration

Fluid Intake of Pregnant and Breastfeeding Women in Indonesia: A Cross-Sectional Survey with a Seven-Day Fluid Specific Record

During pregnancy, the water balance is altered due to an accretion in total body water. This total body water accretion measured by deuterium or antipyrine tracers is on average 7–8 L. For a gestational weight gain of about 12.5 kg, this total water gain is at term distributed in the fetus (2414 g), placenta (540 g), amniotic fluid (792 g), blood-free uterus (800 g), mammary gland (304 g), blood (1.267 g), and extracellular fluid (1.496 g) with no edema or leg edema [1]. Investigators found that the total body water accretion was positively correlated with birth weight [2,3] and the amount of amniotic fluid is a predictor of fetal well-being [4]. However, a direct association between total fluid intake, water intake or intake of any other fluid type and pregnancy outcome is rarely investigated. In an animal study vasopressin, a key player in water homeostasis was associated with a risk to develop preeclampsia; however, this remains a preliminary finding [5]. Pregnant women with bacteriuria have an increased susceptibility to pyelonephritis [6]. Since an increased water intake seems to prevent recurrent urinary tract infections in non-pregnant women [7], it seems relevant to evaluate this, in the future, in pregnant women. The same applies for constipation, which is frequent during pregnancy (>30%) because of hormones and dietary factors [8]. A diet rich in fiber and an increased fluid intake is recommended; however, this is rather a practice-based than evidence-based recommendation [8]. While the physiological changes in body water content during pregnancy are known, the scientific literature on the consequences of inadequate hydration and the benefits of increased water intake remains scarce and superficial.
During lactation, the water balance is also altered. Through breast milk, composed of 87% water, breastfeeding women have an additional water loss of on average 700 mL/day at eight weeks postpartum [9,10]. To ensure the accretion in total body water during pregnancy and the compensation of the additional water loss via breast milk during lactation, the requirements for total water intake (TWI, water originates from fluids and food moisture) are increased during pregnancy and lactation [11].
The reference values of TWI for children, adolescents and adults are adequate intakes (AI) based on observed intakes. However, to the best of our knowledge, only one survey that aimed to assess total fluid intake (sum of drinking water and all other beverages) of pregnant and breastfeeding women was published. This survey was performed in Mexico and showed that a sample of 153 pregnant and 155 breastfeeding women drank on average 2.62 L/day and 2.75 L/day, respectively [12]. The Institute of Medicine (IOM) based the reference values of TWI for pregnant and breastfeeding women on the median TWI observed in National Health And Nutrition Examination Survey III (NHANES III). The AI was set at 3.0 L/day for pregnant women and 3.8 L/day for breastfeeding women, which is an increase of 0.3 L/day and 1.1 L/day, respectively, compared to non-pregnant/non-breastfeeding women [13]. In 2010, the European Food Safety Authorities (EFSA) had no European data available on observed water intakes of pregnant women. Since energy intake during pregnancy increases by 300 kcal/day, they recommend pregnant women to increase TWI by 300 mL/day compared to non-pregnant women. This resulted in an AI of TWI established at 2.3 L/day. For breastfeeding women, the EFSA established the AI of TWI also based on theoretical reasoning: In order to compensate for the water loss through breast milk, water requirement needs to increase by 700 mL/day compared to non-breastfeeding women [14]. In Indonesia, observed intakes of water among pregnant and breastfeeding women were also lacking. Like the EFSA, the Indonesian Ministry of Health consequently built recommendations based on the theoretical relationship between water intake and energy intake, meaning that for each kcal of energy intake, 1 to 1.5 mL of water needs to be consumed [15]. Pregnant women are therefore advised to add 300 mL/day of water to the AI of 2.3 L/day recommended to non-pregnant women. Breastfeeding women are recommended to increase TWI by 800 mL/day during the first six months postpartum and by 650 mL/day after six months postpartum.
To address the lack of available intake data, the primary aim of this cross-sectional survey was to assess the intake of drinking water and all other beverages of a sample of pregnant and breastfeeding women representative of three large cities in Indonesia. The secondary aim was to assess the knowledge about the requirement of fluid intake during pregnancy and lactation.

This cross-sectional survey was conducted in Jakarta, Yogyakarta and Surabaya, representing Java Island in Indonesia. Data collection was performed from January to April 2014. All households with pregnant and breastfeeding women under the selected maternity clinic in each of the study areas were eligible for recruitment. A stratified sampling technique was applied: pregnant women were stratified into three strata, i.e., first, second and third trimester; the breastfeeding women into three strata, i.e., 0–5, 6–11 and 12–24 months post-partum. The study aimed to recruit 600 subjects in total, with 200 subjects per study location (i.e., 100 pregnant and 100 breastfeeding women).
All eligible subjects were given oral and written information about the study objectives and protocol. If willing to participate, a written informed consent was obtained. The study was approved on 23 December 2013 by the Ethics Committee of the Faculty of Medicine Universitas Indonesia (number 783/H2.F1/ETIK/2012).
Thereafter, eligible women were screened for the inclusion and exclusion criteria. Study inclusion criteria were: having signed the informed consent, being pregnant or (exclusively and non-exclusively) breastfeeding, having an age above 18 years, living in the study area for at last one year, having a middle-level of socio-economic status (level B and C based on household expenditure according to AC Nielsen criteria). There were 3 additional inclusion criteria for pregnant women: meeting the stratification of the pregnancy trimester, having a singleton pregnancy and having no pregnancy complication such as hyperemesis gravidarum, hypertension or (gestational) diabetes based on interview and physical examination. Breastfeeding women also had to be apparently healthy, i.e., no acute or chronic diseases based on interview and physical examination. The exclusion criteria were being illiterate and having difficulty with oral communication.
This screening visit was performed by trained physicians and nutritionists in the selected maternity clinic. During the same visit, the seven-day fluid diary was delivered and explained to the subjects during a face-to-face interview. Each day, the same nutritionist visited the subject at home to collect the fluid record of the previous day and to provide a new record for the next day. During the first visit, pregnant women reported their pre-pregnancy weight and height, and lactating women their current weight and height. On day 8, the nutritionist completed the questionnaire on fluid intake knowledge with the subjects. The aim of these daily home visits was to maintain a high participation rate and to avoid subjects copying the previous day’s data into the next-day record. In total, 30 trained nutritionists were involved in the data collection. Each nutritionist was responsible for visiting a maximum of 10 subjects during the same period. This survey followed the same sampling method, protocol and fluid assessment as those taking part in the Liq.In7 surveys [16,17].

2.2. Assessment of Fluid Intake with a Seven-Day Fluid Specific Record

The fluid record was structured to collect the following detailed information on each drinking act in open spaces on the record: the hour of consumption, the type of fluid, the brand of fluid, the volume of the recipient from which the volume was consumed and the volume actually consumed. To assist the subjects in estimating the consumed volumes, the records were supported by a photographic booklet of standard containers of fluids.
All fluids recorded were classified accordingly: water (bottled water and tap water. The latter one is because of safety reasons boiled before consumption), hot beverages (coffee and tea), milk and derivatives, soft drinks (carbonated and non-carbonated sweetened drinks, carbonated and non-carbonated non-calorically sweetened drinks, ice-based. coconut-based, chocolate-based, and energy drinks), juices (fruit and vegetable-based drinks) and other beverages (traditional drinks, cereal drinks, herbal drink, soy bean milk, and others). Total fluid intake (TFI) was defined as the sum of volumes of all these categories. Any addition (e.g., sugar) to a fluid was not taken into account during the fluid classification. The water content of food was not assessed, and consequently not taken into account.
An adequate fluid intake was defined as a TFI above or equal to 80% of AI or TWI since 70% to 80% of TWI is assumed to come from fluids and 20%–30% from food moisture [14]. Consequently the cut-offs used in this analysis to identify an adequate intake were 2080 mL/day for pregnant women, 2480 mL/day for breastfeeding women 0–6 months postpartum and 2360 mL/day for women 7–24 months postpartum [15].

The answers to the second question had a comparable format. Participants were requested to tick off only one answer.

Data were recorded daily using specific forms, and then checked, coded and entered into spread-sheets (SPSS version 21.0. SPSS Inc., Chicago, IL, USA). Subjects reporting a mean total daily fluid intake below 0.4 L/day or higher than 6 L/day, as well as subjects not completing all 7 days of the seven-day fluid record were excluded from the analysis. Data analysis was performed by using JMP (version 10, SAS Campus Drive, Cary, NC, USA). Continuous variables were presented as mean, standard deviation and percentiles and dichotomous variables as number and percentage. Statistical comparisons were performed by pregnancy trimesters, postpartum periods, and areas. The mean intakes are estimated values taking into account all consumers including non-consumers. A Wilcoxon paired test was used for multiple comparisons of continuous variable and chi-square for percentages. A p-value below 0.05 was considered significant.

The analysis was done on five hundred and ninety-five women of which 296 were breastfeeding and 299 were pregnant. A flow chart of the survey is presented in Figure 1 and the demographics of the subjects in Table 1. Of the subjects who completed the survey, most (56%) graduated from senior high school and 72% were housewives. In the pregnant sample, subjects were mainly overweight and obese (51%) with the highest proportion (60%) in Jakarta. Among the breastfeeding women, there was more normal weight than overweight or obese subjects (54% and 38%, respectively). Of the pregnant and breastfeeding women, 4% and 8%, respectively, were underweight.

3.2. Adherence to Indonesian Adequate Intake for Water from Fluids

To conclude, this survey indicated that a large proportion of this Indonesian pregnant and breastfeeding sample had an inadequate intake of water from fluids. Even though the evidence of potential positive health benefits of an increased water intake during pregnancy and lactation is currently limited, this finding suggests that the actions of midwives, general practitioners and other doctors to promote an increased water intake as part of a healthy lifestyle are pertinent.

The study was funded by a research grant from PT Tirta Investama (Danone AQUA, Jakarta 12950, Indonesia). The costs to publish in open access were covered by Danone Research.

I.G. and C.M. are employees of Danone Research. R.P. is an employee of R&D AQUA Group. All other authors declare no conflict of interest. 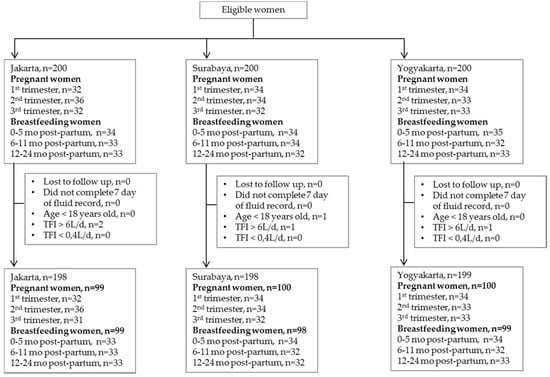 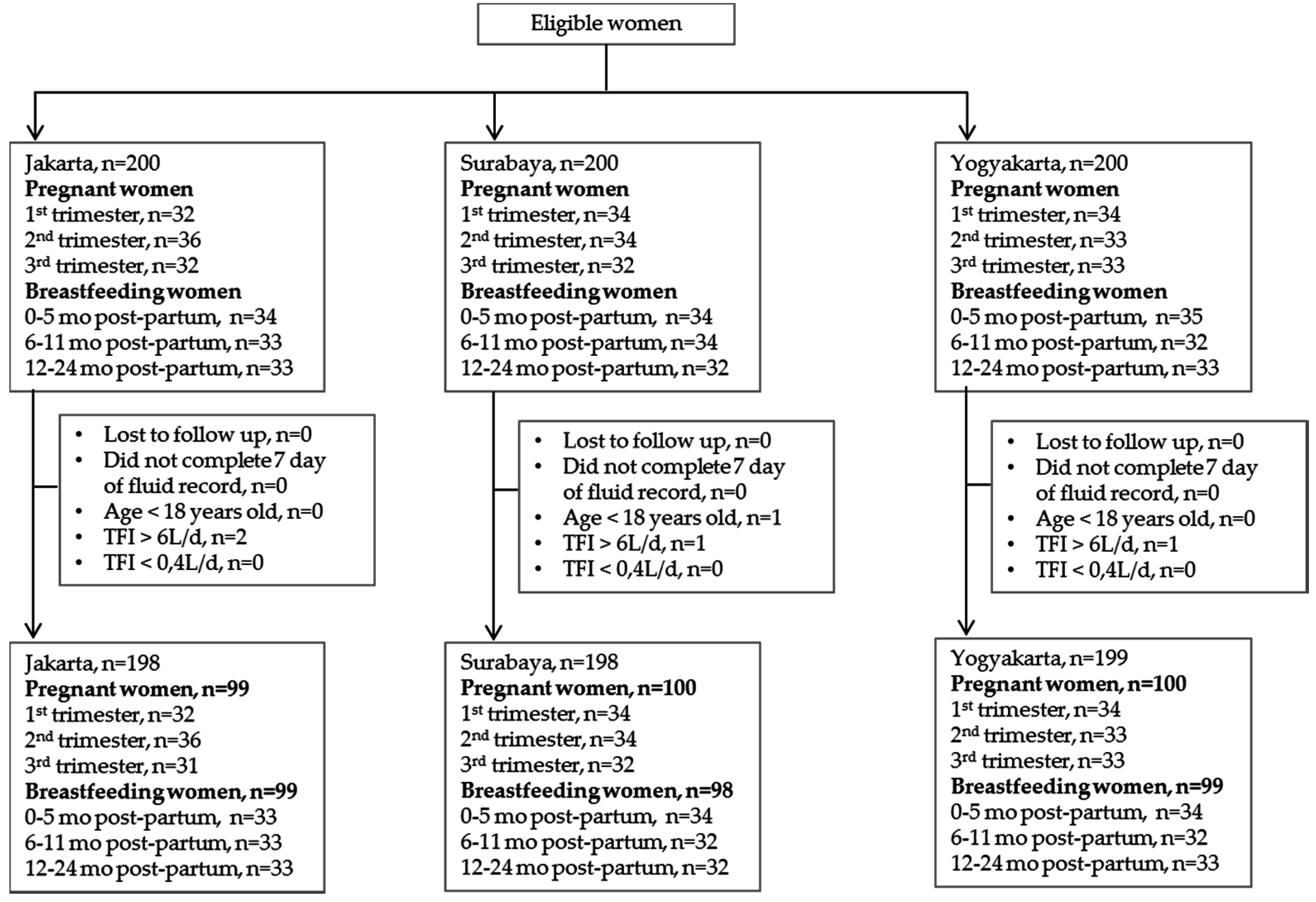 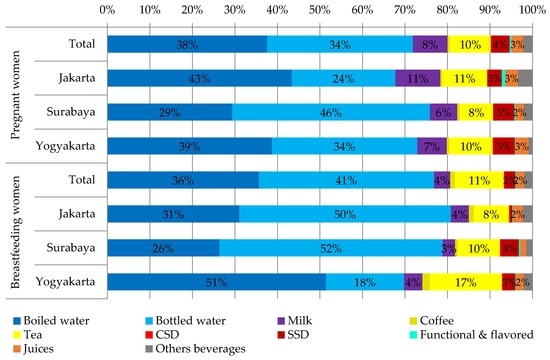 Table 1. General characteristics of the pregnant and breastfeeding women categorized by study area.
Continuous data are presented as mean (SD) and dichotomous as n (%). 1 Body Mass Index (BMI) of pregnant women was calculated with pre-pregnancy weight.

Table 3. Assessment of the knowledge of pregnant and breastfeeding women on the Indonesian Adequate intake for water from fluids.
Data expressed as n (%).