The Metabolic Effects of Oats Intake in Patients with Type 2 Diabetes: A Systematic Review and Meta-Analysis

Type 2 diabetes is a common chronic disease with great global health and economic burden. The prevalence is still increasing due to lifestyle changes, especially in developing countries [1,2]. Diabetic education, nutrition therapy, physical activity, pharmacotherapy and glucose monitoring are key components of diabetes management. Lifestyle intervention including diet control is recommended as the fundamental approach for all patients with type 2 diabetes. Diabetic patients are suggested to consume at least the amount of fibers and whole grains recommended for the general public, which is 14 g fiber/1000 kcals daily or about 25 g/day for adult women and 38 g/day for adult men [3]. Dietary fibers promote one or more of the beneficial effects such as laxation, reduction in blood lipids, modulation of blood glucose due to their non-digestibility in the small intestine and fermentation in the colon. Oats are a good source of soluble dietary fiber rich in β-glucan, which is considered as a bioactive component in reducing postprandial glucose and insulin responses, improving insulin sensitivity, maintaining glycemic control and regulating blood lipids [4,5,6,7]. The United States Food and Drug Administration (FDA) suggested that the consumption of 3 g or more per day of β-glucan from oats or barley may reduce the risk of coronary heart disease [8].
A number of studies have reported the beneficial metabolic effects of oats or β-glucan on people with and without type 2 diabetes [9,10,11,12]. A modified diet with β-glucan from oats was reported to be superior to the American Diabetic Association’s diet in improving metabolic and anthropometric profiles in well controlled type 2 diabetic patients: larger decreases in glycosylated hemoglobin A1c (HbA1c), weight and body mass index (BMI); greater increase in high-density lipoprotein cholesterol (HDL-C) [9]. A high dose of barley β-glucan supplement (6.31 g β-glucan) improved the glucose and insulin responses when added to a high-carbohydrate food in lean, healthy men without type 2 diabetes [10]. For overweight or obese patients and patients with metabolic syndrome, oats fiber also improved glucose intolerance and insulin sensitivity [11,12]. However, the European Food Safety Authority (EFSA) reported that the evidence remained insufficient to prove the relationship between β-glucan consumption and the long-term maintenance of normal blood glucose level [13]. Accordingly, the aim of this systematic review was to comprehensively evaluate if oats intake is beneficial for both the short-term glucose response and the long-term glucose control as well as other metabolic parameters such as lipid and anthropometric profiles in type 2 diabetic patients.

The electronic database of PubMed was searched for articles published before 23 August 2015 using the keywords “oat”, “oats”, or “oatmeal” and “diabetes”. Medical Subject Heading (MeSH) was also used during the search when applicable. The references lists of original studies and review articles investigating the relationship between oats intake and diabetes were screened to make sure all potentially relevant studies were included.
Studies were included if they met the following criteria: (1) Clinical trials or observational studies; (2) Participants with type 2 diabetes mellitus; (3) Oats or oatmeal or oats-containing products as the intervention or exposure; (4) Reporting the changes of blood glucose, insulin, HbA1c, postprandial glucose and insulin responses, insulin sensitivity or β-cell function. Changes of lipid profiles, weight and BMI were additional outcomes.

We chose a literal description and a meta-analysis to report the results. The change form baseline in each diet pattern or the change of the intervention diet relative to the control diet was displayed in the tables. Statistically significant changes (p < 0.05) were marked with different symbols in the tables. The meta-analysis was carried out using STATA 12.0, and the changes from baseline of metabolic parameters were calculated as the mean differences (MD) with their 95% confidence intervals (CIs). The Grading of Recommendations Assessment, Development, and Evaluation (GRADE) system (GRADEprofiler 3.6.1) was used to rate the quality of evidence. 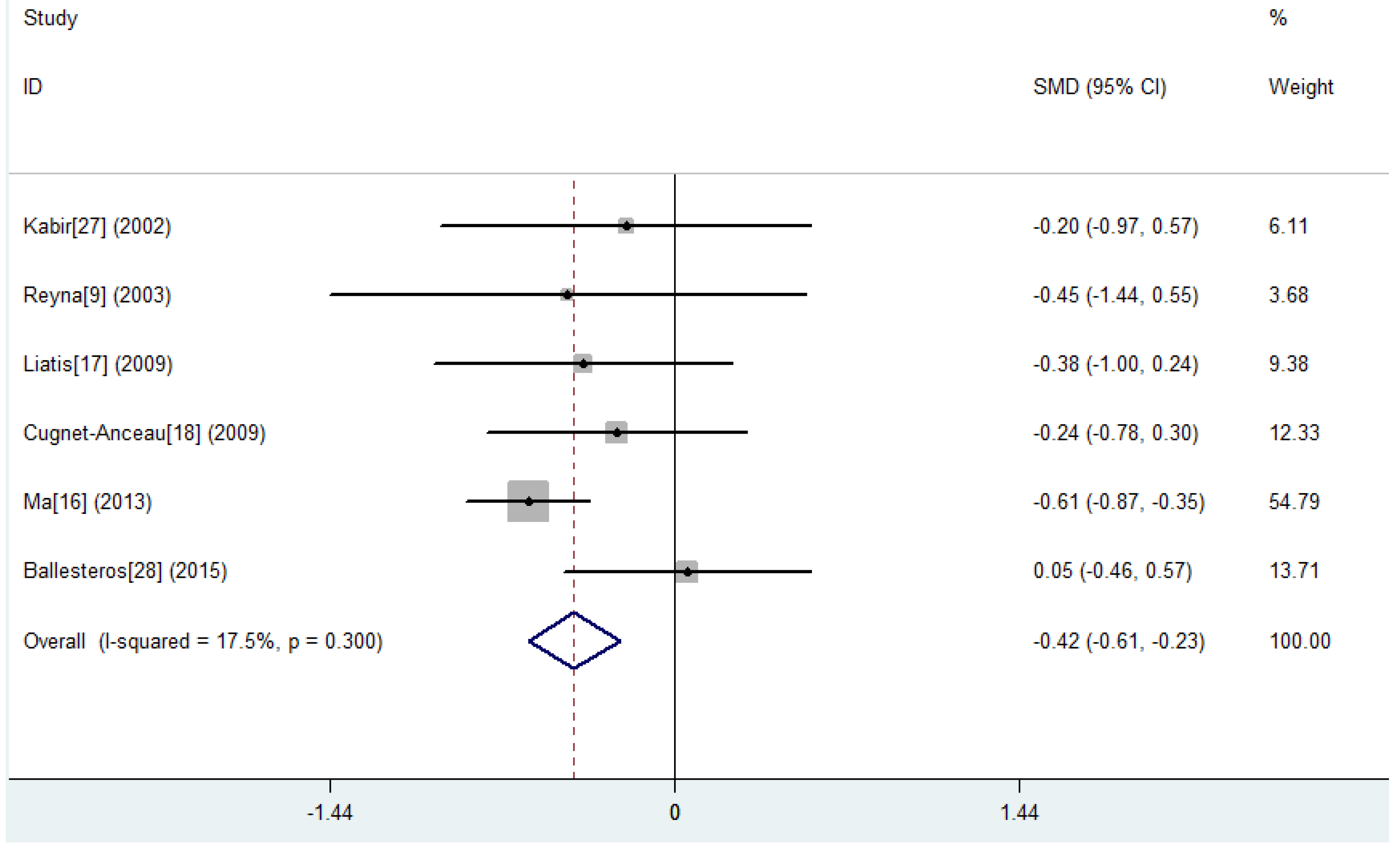 One critical outcome and nine important outcomes were assessed by the GRADE system. The detailed information of evidence quality is presented in Table S4.

In conclusion, the present systematic review has revealed a beneficial effect of oats consumption on glucose and lipid profiles in patients with type 2 diabetes, and could therefore be recommended to patients. Naked oats, having low calories, might provide more benefits and a recommendation of 3 g or more per day of β-glucan might be beneficial. The effects of oats intake on type 1 diabetes and the safety of oats consumption should also be investigated in the future.

This study was funded by the National Natural Science Foundation of China (Grant No. 81400811) and Scientific Research Project of Health and Family Planning Commission of Sichuan Province (Grant No. 150149).