The main objective of this research was to determine the effects of a long-term ketogenic diet, rich in polyunsaturated fatty acids, on aerobic performance and exercise metabolism in off-road cyclists. Additionally, the effects of this diet on body mass and body composition were evaluated, as well as those that occurred in the lipid and lipoprotein profiles due to the dietary intervention. The research material included eight male subjects, aged 28.3 ± 3.9 years, with at least five years of training experience that competed in off-road cycling. Each cyclist performed a continuous exercise protocol on a cycloergometer with varied intensity, after a mixed and ketogenic diet in a crossover design. The ketogenic diet stimulated favorable changes in body mass and body composition, as well as in the lipid and lipoprotein profiles. Important findings of the present study include a significant increase in the relative values of maximal oxygen uptake (VO2max) and oxygen uptake at lactate threshold (VO2 LT) after the ketogenic diet, which can be explained by reductions in body mass and fat mass and/or the greater oxygen uptake necessary to obtain the same energy yield as on a mixed diet, due to increased fat oxidation or by enhanced sympathetic activation. The max work load and the work load at lactate threshold were significantly higher after the mixed diet. The values of the respiratory exchange ratio (RER) were significantly lower at rest and during particular stages of the exercise protocol following the ketogenic diet. The heart rate (HR) and oxygen uptake were significantly higher at rest and during the first three stages of exercise after the ketogenic diet, while the reverse was true during the last stage of the exercise protocol conducted with maximal intensity. Creatine kinase (CK) and lactate dehydrogenase (LDH) activity were significantly lower at rest and during particular stages of the 105-min exercise protocol following the low carbohydrate ketogenic diet. The alterations in insulin and cortisol concentrations due to the dietary intervention confirm the concept that the glucostatic mechanism controls the hormonal and metabolic responses to exercise. View Full-Text
Keywords: free fatty acids; diet; aerobic capacity; insulin; cortisol; lactate concentration free fatty acids; diet; aerobic capacity; insulin; cortisol; lactate concentration
►▼ Show Figures 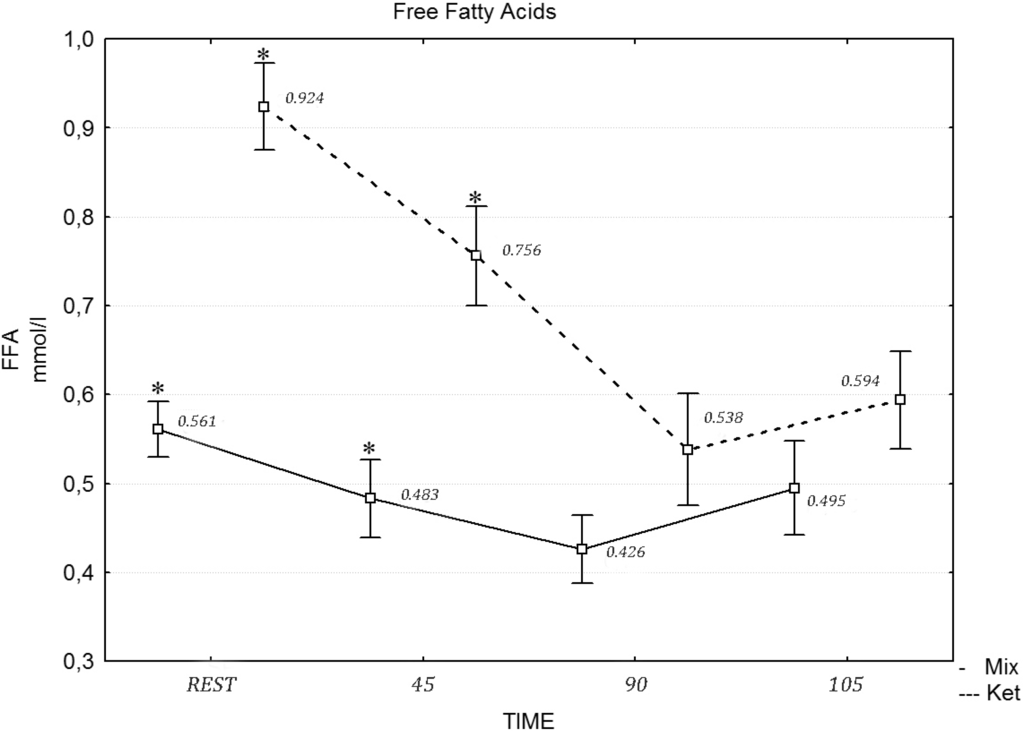