The aim of this study was to look for the presence of IgG, IgM, and IgA antibodies against two widely consumed foods, wheat and milk, in a relatively large number of specimens. As wheat, milk, and their antigens have been found to be involved in neuroimmune disorders, we measured the co-occurrence of their antibodies against various neural antigens. We assessed the reactivity of sera from 400 donors to wheat and milk proteins, GAD-65, cerebellar, MBP, and MOG. Statistical analysis showed significant clustering when certain wheat and milk protein antibodies were cross-referenced with neural antibodies. Approximately half of the sera with antibody elevation against gliadin reacted significantly with GAD-65 and cerebellar peptides; about half of the sera with elevated antibodies against α + β-casein and milk butyrophilin also showed antibody elevation against MBP and MOG. Inhibition studies showed that only two out of four of the samples with elevated cerebellar or MOG antibodies could be inhibited by gliadin or α + β-casein, confirming individual variation in epitope recognition. We conclude that a subgroup of blood donors, due to a breakdown in immunological tolerance, may react and produce significant levels of antibodies (p-values less than 0.05) against wheat and milk antigens that cross-react with different neural antigens, which may have broader implications in the induction of neuroimmune reactivities. View Full-Text
Keywords: antibodies; wheat proteins; milk proteins; neuroimmune antibodies; wheat proteins; milk proteins; neuroimmune
►▼ Show Figures 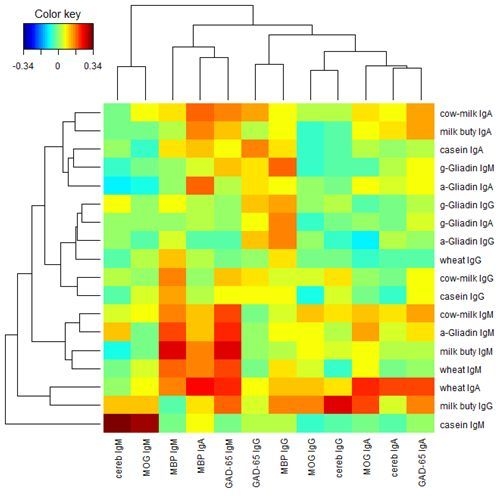 
Vojdani A, Kharrazian D, Mukherjee PS. The Prevalence of Antibodies against Wheat and Milk Proteins in Blood Donors and Their Contribution to Neuroimmune Reactivities. Nutrients. 2014; 6(1):15-36. https://doi.org/10.3390/nu6010015


Vojdani, Aristo; Kharrazian, Datis; Mukherjee, Partha S. 2014. "The Prevalence of Antibodies against Wheat and Milk Proteins in Blood Donors and Their Contribution to Neuroimmune Reactivities" Nutrients 6, no. 1: 15-36. https://doi.org/10.3390/nu6010015