Metabolic syndrome is defined as a collection of risk factors for cardiovascular disease, including abdominal obesity, hypertension, insulin resistance and fatty liver. This syndrome is associated with an increased dietary intake of saturated fats and simple sugars, including glucose and fructose [1,2]. The prevalence of metabolic syndrome is increasing throughout the world [1], suggesting that more can be done to provide affordable treatment options. These options include local natural products, as they could be readily available at low cost, with an appropriate safety profile, as they may have been available in foods for many generations. The flavonoids are ubiquitous as secondary metabolites in plants. Experimental and epidemiological data indicate that dietary flavonoids reduced the risk of coronary heart disease, diabetes and non-alcoholic fatty liver diseases [3], so these compounds are potential options for treatment of metabolic syndrome.
Naringin (4′,5,7-trihydroxyflavone 7-rhamnoglucoside), found in grape fruit and related citrus species [3], and its colonic metabolite, naringenin, have been reported to show anti-inflammatory, antioxidant and cardioprotective activities, including lowering of blood glucose and cholesterol concentrations and improved insulin signalling [4,5,6,7,8]. Naringin upregulated peroxisome proliferator-activated receptor γ (PPARγ) [8], activated adenosine monophosphate (AMP) kinase [9] and suppressed liver fatty acid synthase, glucose-6-phosphate dehydrogenase, phosphatidate phosphohydrolase, HMG-CoA reductase and acyl CoA:cholesterol acyltransferase activities in type 2 diabetic mice [10].
We have reported that rats fed a high carbohydrate, high fat diet for 16 weeks developed many of the signs of metabolic syndrome in humans [11]. Further, chronic treatment with the flavonoid, rutin [12], or its aglycone, quercetin [13], reversed most of these symptoms, despite continuation of the high carbohydrate, high fat diet. The present study has determined whether administration of naringin at the same dose as rutin [12] reverses the metabolic parameters, as well as the changes in the structure and function of the heart, blood vessels, liver and kidneys in rats fed a high carbohydrate, high fat diet. We suggest that naringin has the potential to be a useful dietary supplement in the management of the signs of metabolic syndrome.

Mitochondria were isolated from the liver of rats according to standard differential centrifugation procedures [16] and prepared in a medium containing 200 mM sucrose, 1 mM ethylene glycol tetraacetic acid (EGTA) and 10 mM Tris-HCl (pH 7.2). Mitochondrial protein content was determined by the bicinchoninic acid protein assay method, with bovine serum albumin (BSA) as the standard. Mitochondria were incubated at a final concentration of 0.35 mg/ml in a Clark-type electrode chamber for oxygen consumption measurements. All experiments were performed at 37 °C in a buffer containing 125 mM KCl, 1 mM EGTA, 1 mM KH2PO4 and 10 mM Tris-HCl (pH 7.2). The control (non-phosphorylating) state of respiration was initiated by the addition of 5 mM succinate/5 µM rotenone. State 3 (phosphorylating respiration) was obtained after the addition of 1 mM adenosine diphosphate (ADP). State 4 respiration was considered as the respiratory state in the absence of ADP. The efficiency of the mitochondrial oxidative phosphorylation was assessed by the state 3 to state 4 ratio, the respiratory control ratio (RCR).

Immediately after euthanasia, the heart and liver were blotted, weighed and cut into 3–4 mm slices, then fixed in 10% buffered formalin for 3 days, with a change of formalin solution every day to remove traces of tissue debris. The samples were then dehydrated and embedded in paraffin wax. Thin sections (5 µm) were cut and stained with either haematoxylin and eosin stain for determination of inflammatory cell infiltration and general architecture of the tissues or picrosirius red stain in the left ventricle or Milligan’s trichrome in the liver for collagen distribution. Collagen distribution was analysed by laser confocal microscopy (Zeiss LSM 510 upright Confocal Microscope). Colour intensity was quantitated using NIH-ImageJ free software (NIH) to determine the extent of collagen deposition in selected tissue sections.

All data sets were represented as the mean ± standard error of mean (SEM). Comparisons of findings between groups were made via statistical analysis of data sets using one-way and two-way analysis of variance (ANOVA). When interaction and/or the main effects were significant, means were compared using Newman-Keuls multiple-comparison post-hoc test. A p-value of <0.05 was considered as statistically significant. All statistical analyses were performed using Graph Pad Prism version 5.00 for Windows. 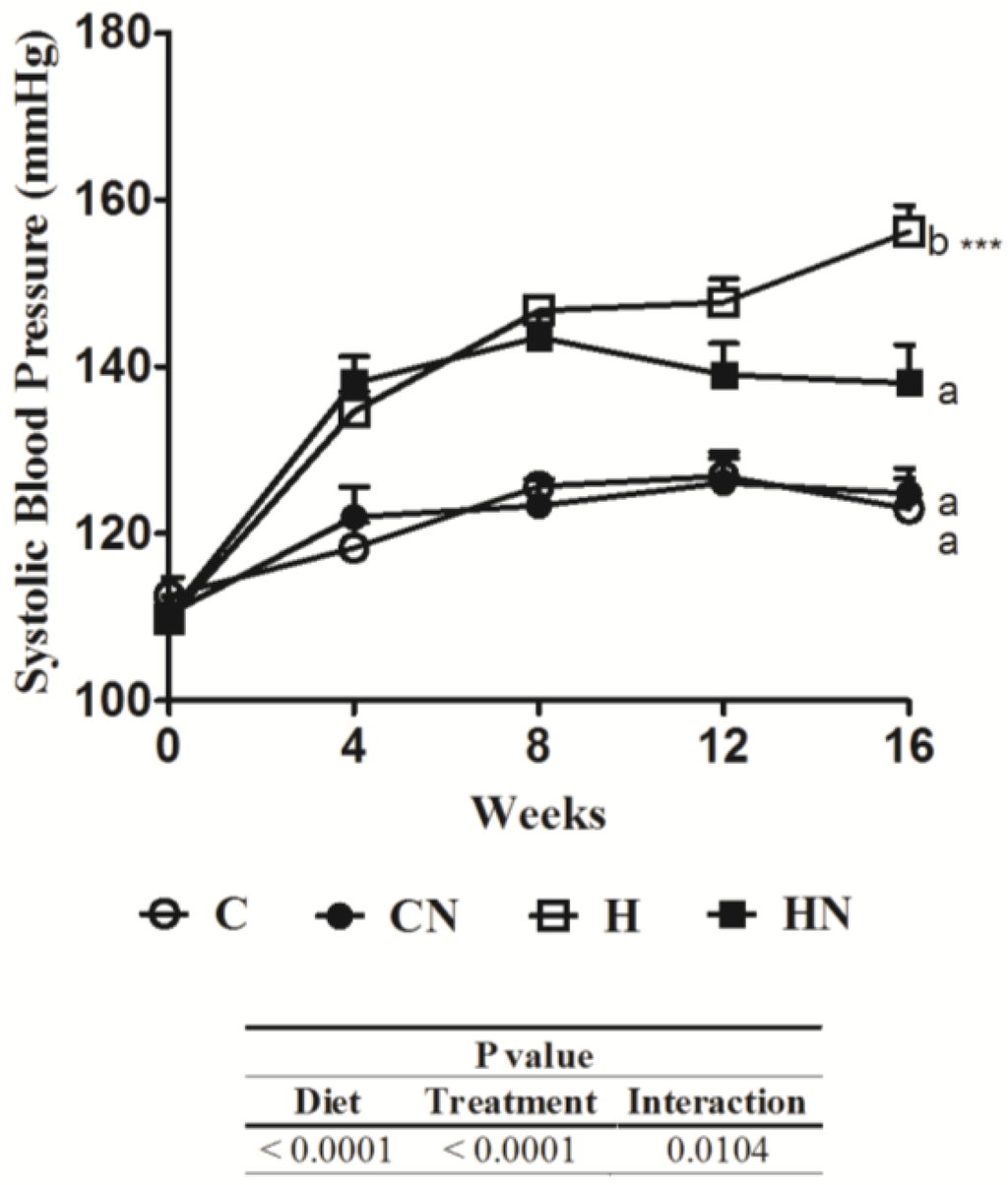 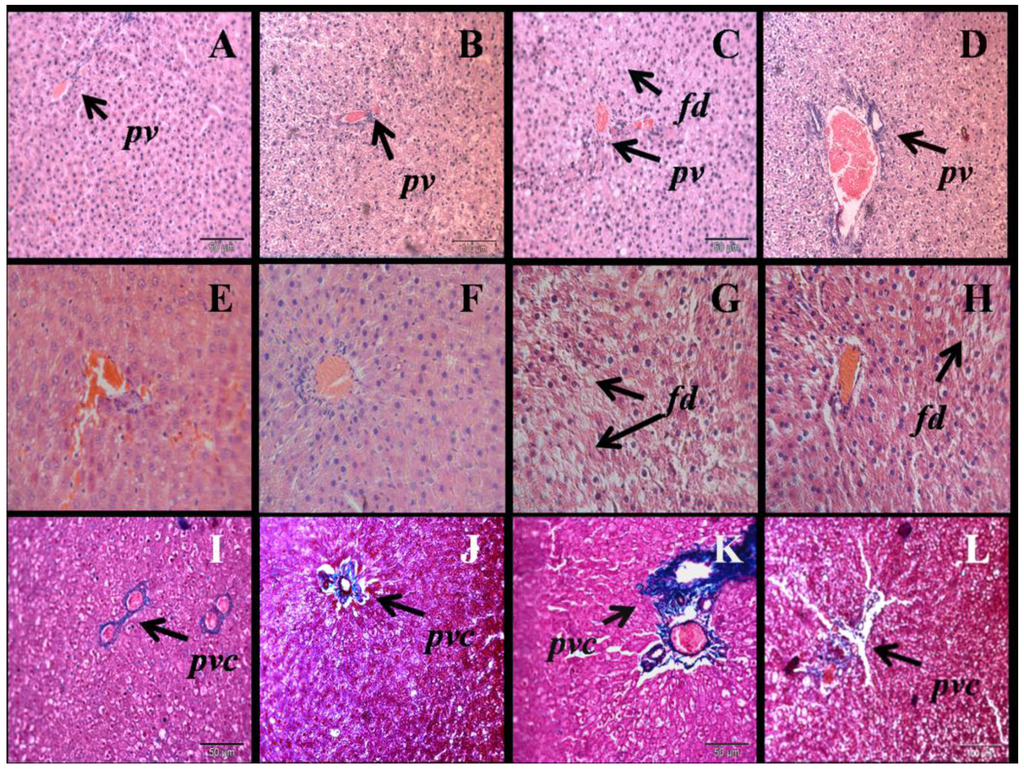 Chronic feeding of a diet rich in simple carbohydrates and saturated fats induces the signs of metabolic syndrome in rats [11], with some or all signs being reversed when natural compounds from foods, including flavonoids, such as rutin and quercetin, are added to the diet [12,13]. This study showed that naringin produces similar responses to rutin and quercetin in high carbohydrate, high fat-fed rats. Our results suggest that several mechanisms may contribute to the reversal of signs, including reduced inflammatory cell infiltration, reduced oxidative stress, lowered plasma lipid concentrations and improved liver mitochondrial function.
Metabolic syndrome is a collection of risk factors for cardiovascular disease. Naringin showed a range of properties that help protect the cardiovascular system, including antihypertensive, lipid-lowering, insulin-sensitising, anti-oxidative and anti-inflammatory properties [17]. Naringin prevented the age-related increase in systolic blood pressure in stroke-prone spontaneously hypertensive rats, increased nitric oxide production, improved endothelial function and decreased cerebral thrombotic tendency [18]. Further, naringin prevented oxidative stress in the hearts of rats with isoprenaline-induced myocardial infarction [19].
Obesity, an important component of metabolic syndrome, is a chronic low-grade inflammatory condition leading to adipocyte differentiation and growth in adipose tissues [20]. In mice fed a high fat diet, naringin decreased visceral adiposity and lowered plasma lipid concentrations, probably by activation of AMP kinase [9]. Naringin was more effective as an anti-inflammatory compound than indomethacin in the air pouch model of inflammation [21]. The increased production of inflammatory cytokines in rats treated with streptozotocin and a high fat diet was reversed by chronic treatment for four weeks with naringin (50 mg/kg) [22]. Naringenin, the aglycone of naringin produced by colonic bacteria before absorption, induced growth arrest, apoptosis and lipolysis in a cell line of human pre-adipocytes, in contrast to naringin [23]. In the high carbohydrate, high fat dietary model, we have shown that both the closely related flavonoid, rutin, and its aglycone, quercetin, decreased abdominal fat pads [12,13], similar to naringin in this study.
Insulin resistance/hyperglycaemia and hyperlipidaemia are two of the diagnostic criteria for metabolic syndrome. In type 2 diabetic db/db mice, naringin prevented the progression of hyperglycaemia by increasing hepatic glycolysis and lowering hepatic gluconeogenesis [24]. Naringin (40 mg/kg in rats) effectively inhibited dipeptidyl peptidase-IV in vivo, lowering blood glucose and increasing blood insulin concentrations [25]. Regulation of glucose-regulating enzymes, such as phosphoenolpyruvate carboxykinase and glucose-6-phosphotase following activation of AMP kinase by naringin, reduced plasma blood glucose concentrations in mice fed a high fat diet [9]. In these high fat-fed mice, naringin lowered lipid synthesis, increased fatty acid oxidation, reversed adipocyte hypertrophy and decreased hepatic steatosis [9]. Further, naringin lowered cholesterol biosynthesis in rats fed a high fat and high cholesterol diet [26]. However, treatment of moderately hypercholesterolaemic men and women with naringin 500 mg/day did not change plasma cholesterol concentrations [27], showing the difficulty of extrapolating rat results to humans.
Liver function may be improved in naringin-treated rats by decreased lipid peroxidation in diabetes [28], improvement of hepatic insulin signalling by naringenin [7] and improved liver structure and function, as with the closely related flavonoids, rutin [12] and quercetin [13]. Liver mitochondrial function was compromised in the liver of high fat-fed rats [29]. Transcriptional regulators of mitochondria are important in lipid metabolism and steatosis in liver. Naringin increased PPARγ protein expression, a transcriptional regulator of mitochondrial function, and prevented steatosis in diabetic male rats fed a high fat diet, probably by decreasing the expression of liver X receptor (LXR) and sterol regulatory element-binding protein (SREBP)-1c and SREBP-1a in liver [8]. In our study, naringin improved the respiratory function of isolated mitochondria from liver, suggesting improvement of mitochondrial function and lipid metabolism.
The low water solubility limits the bioavailability of flavonoids that depend upon the efficiency of their transfer through the brush border and the capacity of the intestine to secrete conjugated metabolites [30]. The colon microflora hydrolysed naringin to naringenin, which is then absorbed from the colon to increase apparent bioavailability [31]. The ingestion of naringenin from capsules or naringin from grapefruit juice (135–199 mg naringenin equivalent) led to peak plasma concentrations of 6.0–7.3 μmol/L [32,33]. Commercial grapefruit juice ingestion in healthy volunteers showed peak plasma concentrations ranging from 0.3 to 1.5 μmol/L [34].
One potential mechanism of action of polyphenols, such as naringin and naringenin, involves changes in the gastrointestinal microbial population. This population has been implicated in human disease states, including obesity [35], with polyphenols being both substrates for microbial biochemical pathways and modulators of bacterial growth [36]. Flavonoid aglycones, such as naringenin and quercetin, inhibited the growth of a wide range of gastrointestinal bacteria to a much greater extent than the parent glycosides [37]. These mechanisms open up a wide range of therapeutic possibilities for natural plant products as part of the diet [38].
In this study, rats were administered naringin at a dose of approximately 100 mg/kg/day. This dose corresponds to ~1 g/day naringin in a 70 kg human based on scaling equations [39] or ~0.6 g/day based on body surface area comparisons between rats and humans [40]. Although the average daily human intake of naringin is not known, the total intake of polyphenols is ~1 g/day, with two-thirds being flavonoids [41]. This suggests that the dose of naringin used in this study is realistic in humans. This could also suggest that the dose of 500 mg/day in hypercholesterolaemic patients [27] may be too low to achieve full responses. Naringin is listed as “generally regarded as safe”, and chronic effects at doses of 1 g/day and greater have not been reported. Naringin may need to be given in divided doses, since the half-life of the aglycone, naringenin, produced in the distal colon, was reported as 2.3 h in humans [33].

Naringin was effective against the symptoms of metabolic syndrome in a diet-induced obese rat model. Naringin decreased inflammatory cell infiltration, lowered plasma lipids, improved oxidative stress and mitochondrial function as the probable mechanisms to reverse metabolic syndrome. Thus, citrus flavonoids, such as naringin, can be considered as a therapeutic option for the treatment of metabolic syndrome; clinical trials are required to establish the safety of these natural compounds.

MAA was supported by a Merit Development Scholarship from the Islamic Development Bank, Jeddah, Saudi Arabia, and UQIRTA from The University of Queensland. We thank Brian Bynon, School of Veterinary Science, and Paul Addison, School of Biomedical Sciences, both at The University of Queensland, for their help with plasma biochemical analyses and histology, respectively. We also thank Jason Brightwell, The Prince Charles Hospital, Brisbane, for the acquisition of the echocardiographic images.