Supplementation of Omega 3 during Pregnancy and the Risk of Preterm Birth: A Systematic Review and Meta-Analysis
Previous Article in Journal

Dietary Polyphenol Intake Is Associated with Biological Aging, a Novel Predictor of Cardiovascular Disease: Cross-Sectional Findings from the Moli-Sani Study

Alzheimer’s disease (AD) is a complex progressive neurodegenerative disorder affecting humans mainly through the deposition of Aβ-amyloid (Aβ) fibrils and accumulation of neurofibrillary tangles in the brain. Currently available AD treatments only exhibit symptomatic relief but do not generally intervene with the amyloid and tau pathologies. The extra-virgin olive oil (EVOO) monophenolic secoiridoid S-(–)-oleocanthal (OC) showed anti-inflammatory activity through COX system inhibition with potency comparable to the standard non-steroidal anti-inflammatory drug (NSAID) like ibuprofen. OC also showed positive in vitro, in vivo, and clinical therapeutic effects against cardiovascular diseases, many malignancies, and AD. Due to its pungent, astringent, and irritant taste, OC should be formulated in acceptable dosage form before its oral use as a potential nutraceutical. The objective of this study is to develop new OC oral formulations, assess whether they maintained OC activity on the attenuation of β-amyloid pathology in a 5xFAD mouse model upon 4-month oral dosing use. Exploration of potential OC formulations underlying molecular mechanism is also within this study scope. OC powder formulation (OC-PF) and OC-solid dispersion formulation with erythritol (OC-SD) were prepared and characterized using FT-IR spectroscopy, powder X-ray diffraction, and scanning electron microscopy (ScEM) analyses. Both formulations showed an improved OC dissolution profile. OC-PF and OC-SD improved memory deficits of 5xFAD mice in behavioral studies. OC-PF and OC-SD exhibited significant attenuation of the accumulation of Aβ plaques and tau phosphorylation in the brain of 5xFAD female mice. Both formulations markedly suppressed C3AR1 (complement component 3a receptor 1) activity by targeting the downstream marker STAT3. Collectively, these results demonstrate the potential for the application of OC-PF as a prospective nutraceutical or dietary supplement to control the progression of amyloid pathogenesis associated with AD. View Full-Text
Keywords: β-amyloid; C3AR1; EVOO; oleocanthal; oral formulation; STAT3; Alzheimer’s disease β-amyloid; C3AR1; EVOO; oleocanthal; oral formulation; STAT3; Alzheimer’s disease
►▼ Show Figures 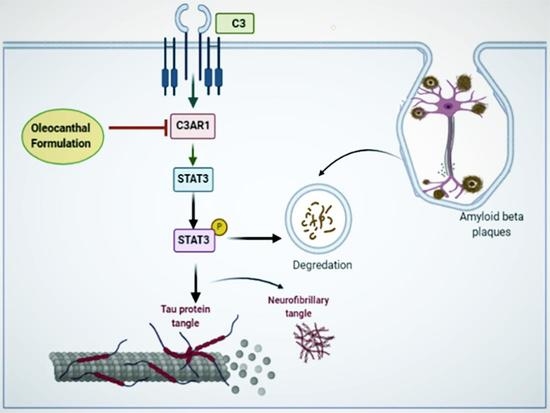