The Level of Processing, Nutritional Composition and Prices of Canadian Packaged Foods and Beverages with and without Gluten-Free Claims

Exclusive Breastfeeding Is Not Associated with Maternal–Infant Bonding in Early Postpartum, Considering Depression, Anxiety, and Parity

This study was part of the Perinatal Mental Health Research Project, which we conducted jointly with the Niigata University Medical and Dental Hospital, Department of Obstetrics and Gynecology, and 33 associated obstetric institutions in Niigata Prefecture, Japan. This study was approved by the Niigata University Ethics Committee (approval number: 2016–0019) and the ethics committees of the participating obstetric institutions. Written informed consent was obtained from all participants.

This study was part of the Perinatal Mental Health Research Project, which started in March 2017 [7,12,13]. We collected data for breastfeeding methods, the Japanese versions of the Hospital Anxiety and Depression Scale (HADS), and the Mother-to-infant Bonding Scale (MIBS) for 2020 postpartum women (1029 primipara and 991 multipara, mean age 32.2 ± 4.8 years) who visited the participating obstetric institutions at 1 month after giving birth. The participants were the same cohort as used in our previous study that reported the relationships between anxiety, depression, parity, and mother–infant bonding in 2379 Japanese mothers [7]. However, we excluded those without data for breastfeeding methods. Women with serious physical complications, serious pregnancy complications, or severe psychiatric disorders (e.g., severe schizophrenia or severe depression) were also excluded.

In this study, self-completed questionnaires were consecutively used at three time points: early pregnancy (approximately 12–15 weeks), late pregnancy (approximately 30–34 weeks), and postpartum (4 weeks after childbirth).
The HADS is commonly used to screen for anxiety and depression in clinical settings [14] and was translated into Japanese by Kitamura [15]. The scale comprises 14 questions: seven items assess anxiety (items 1, 3, 5, 7, 9, 11, and 13), and seven assess depression (items 2, 4, 6, 8, 10, 12, and 14). Participants are asked to rate all items on a four-point Likert-type scale from 0 to 3.
The Mother–Infant Bonding Questionnaire (MIBQ) developed by Kumar and colleagues [16] is used to evaluate bonding disturbance during the postpartum period. Those authors revised the MIBQ to develop the MIBS [17]. Marks and colleagues further modified the MIBS by changing the wording of some items and adding a new item. This modified version of the MIBS was translated into Japanese (MIBS-J) by Yoshida et al. [18]. We described the MIBS-J in detail in our previous studies [7,12]. Participants are asked to rate the 10 MIBS-J items on a four-point Likert-type scale from 0 to 3. Our previous study detected a two-factor structure for the MIBS-J: lack of affection (items 1, 6, 8, and 10) and anger and rejection (items 2, 3, 5, and 7) [12]. Therefore, we used these two factors in this study.
Obstetric characteristics such as parity (primiparous or multiparous) and breastfeeding methods during the first four weeks after childbirth were obtained through interviews by midwives. This study was a sub-analysis of postpartum data up to December 2019.

In this study, the numbers of women with exclusive breastfeeding, that added any formula-feeding to breastfeeding, and with formula-feeding only were 1029, 945, and 46, respectively.
First, we compared characteristics such as parity, age, and HADS and MIBS subscale scores among exclusive, mixed, and formula-feeding groups. We used chi-square tests for categorical data and analysis of variance (ANOVA) for continuous variables. The level of significance was set at p < 0.0063 according to the Bonferroni correction of eight statistical tests. We used the Bonferroni post hoc test following the ANOVA and adjusted residual after chi-square test.
Second, we performed path analysis for factors, including breastfeeding method, parity, the two HADS subscales (anxiety and depression), and the two MIBS subscales (lack of affection and anger and rejection). For the breastfeeding method, we divided our participants into an exclusive breastfeeding group and a non-exclusive breastfeeding group, with the latter comprising the mixed and formula-feeding groups.
We used the root mean square error of approximation (RMSEA) as the index to evaluate the goodness of fit between the models and the data.
All statistical analyses were conducted using SPSS version 25 (IBM Corp., Armonk, NY, USA) and Amos 25.0.0 (IBM Japan, Tokyo, Japan).

This study was part of the Perinatal Mental Health Research Project, which we conducted jointly with the Niigata University Medical and Dental Hospital, Department of Obstetrics and Gynecology, and 33 associated obstetric institutions in Niigata Prefecture, Japan. This study was approved by the Niigata University Ethics Committee (approval number: 2016–0019) and the ethics committees of the participating obstetric institutions.

All relevant data are within the paper. We are not able to make the underlying data available to readers, because we do not have the permission of the ethical committees to do so. 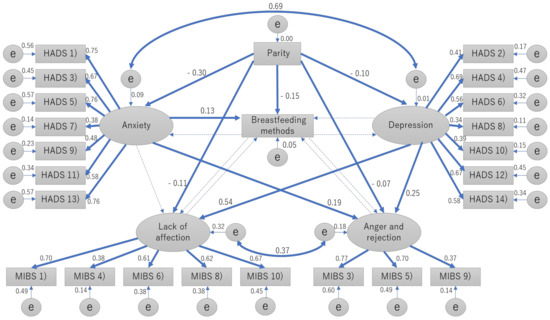