Improving Successful Introduction after a Negative Food Challenge Test: How to Achieve the Best Result?

Food allergy is a well-known worldwide health problem. Prevalence numbers vary from 1–11% with patient self-reported food allergy up to 35% [1,2,3]. The most common food allergens in young children are cow’s milk (2.5%), egg (1.3%), peanut (0.8%), wheat (0.4%), soy (0.4%), and tree nuts (0.2%) [4]. The gold standard for the diagnosis of food allergy is an oral food challenge test (OFC). Besides diagnosing an allergy, OFCs are also frequently performed to examine whether tolerance is developed in children who have a history of food allergy. After a positive outcome of a food challenge, a specific diet avoiding the culprit allergen is advised in order to prevent allergic reactions. This diet has a high impact on the quality of life of allergic children and their parents and deserves medical attention and guidance in order to avoid dietary shortage, malnutrition, or excessive avoidance behavior [5,6].
After a negative outcome of a food challenge test, it is recommended that children should (re)introduce the investigated allergen into their diet to improve dietary management and consequently to improve their quality of life. However, usually fewer consultations and follow-ups take place after a negative OFC. Recurrence of allergy is described in patients with a peanut allergy. These patients passed a food challenge test but failed to consume peanut frequently and had a recurrence of their allergy [7,8,9]. In addition, there is increasing evidence that atopic children who avoid allergenic foods for which they are sensitized are at increased risk of developing an acute allergy with the possibility of a severe allergic reaction in such cases [10]. Therefore, unnecessary elimination diets should be avoided as much as possible. For these reasons, a negative OFC can only be considered successful if it is followed by a successful introduction in the diet. Unfortunately, failure of introduction is reported frequently in the literature due to several reasons [9,11,12,13,14]. Reasons for (re)introduction failure are: symptoms during introduction, aversion of the food, fear of the child or parents, habit of not eating the food, other allergies, positive challenge test in patients or parents’ experience, and allergy in the family [11].
The aim of this study is to evaluate whether new comprehensive advice and a written allergen-specific introduction protocol can increase the rate of a successful allergen introduction after a negative OFC for cow’s milk, hen’s egg, peanut, or hazelnut.

This prospective non-randomized intervention study was conducted between 16 March and 18 May at the Erasmus Medical Center, Sophia Children’s Hospital in Rotterdam, The Netherlands. Approval of the Dutch medical ethical committee was received (MEC-2016-597). There were 104 children aged 0–18 years with a negative OFC to cow’s milk, hen’s egg, peanut, and hazelnut included in the study. OFCs were either open or double-blinded placebo-controlled. Outcomes were assessed and compared before and after the intervention.

Van der Valk et al. conducted a retrospective study in the same population and clinic from 2008–2013 [11]. A total of 188 negative OFCs were performed in 157 children. None of the children and parents received any special advice after their negative challenge test. The percentage of successful introductions after negative OFCs and reasons of introduction failure were examined. Since this investigated historical group is similar to our enrolled group of children, these results were used as a baseline prior to our intervention.
For this interventional study, parents and children were asked to participate after a negative OFC with one of the following allergens: cow’s milk, hen’s egg, peanut, or hazelnut (study group). OFC were either open, where the child received an unmasked food (the suspected allergen), or double-blinded (DBPCFC) with the allergen hidden and processed in a matrix. The matrix used for egg, peanut, and hazelnut was gingerbread; for cow’s milk the matrix was soymilk, rice milk, or the hydrolyzed formula the child was using at that time. In the DBPCFC the child received on one day the placebo and the other day the suspected allergen. Blinding was guaranteed for the physician, the nurse, and the patient. Blinding was broken 24 h after the challenge. The food challenge test consisted of a six-step doses regime with increasing dosages every 20–30 min of 1, 3, 10, 30, 100, 300, and 1000 mg protein equivalent. Cumulatively, these dose were comparable to 50 mL of cow’s milk, one fifth of hen’s egg, seven peanuts, or ten hazelnuts. The challenge was discontinued and scored positive when objective allergic symptoms occurred, or subjective allergic symptoms occurred twice on two successive administrations of the challenge material. Objective symptoms and signs were defined as angioedema, urticaria, significant increase in eczema, rash, vomiting, diarrhea, rhinoconjunctivitis, stridor, coughing, wheezing, hoarseness, collapse, tachycardia, and hypotension. Subjective symptoms were defined as exacerbation of generalized itch (in the case of atopic eczema), abdominal pain, nausea and/or cramps, oral allergy symptoms, itchy throat or sensation of throat swelling, difficulty in swallowing, and ‘other’ symptoms such as drowsiness and irritability. Patients were observed for at least 1 h after the last dosage before discharge.
After inclusion, children and parents received a written step-wise introduction protocol concerning the challenged allergen. The protocol contained a list of several products containing the food allergen with stepwise advice on how to introduce carefully and in a well-controlled way. Additionally, parents were asked to fill in a food diary in order to assess the amount and frequency of the introduced allergen (see Files S1–S4).
The food diary was returned after 6 weeks and evaluated by a telephone consultation with the parents. A questionnaire of 40 questions was carried out during this consultation (see File S5).

Rate of successful dietary introduction was compared between the control group and the study group. Data were collected and processed in IBM SPSS Statistics (Version 25, North Castle, New York, USA). The data were analyzed by means of frequencies, differences, and coherence. Differences in introductions between the control group and the research group were analyzed using a chi-square test. Multivariable logistic regression analysis was performed to study the effect of the intervention and several covariables on the introduction of the allergen. Significance was defined as a p-value < 0.05.

A total of 104 children participated in the current study and 157 children in the control group. No patients were lost to follow-up. Baseline characteristics are presented in Table 1.
In the control group, a total of 188 negative food challenge tests were analyzed for either cow’s milk, chicken’s egg, peanut, or hazelnut. In the study group, a total of 104 food challenge tests were analyzed and performed in the period. Most challenge tests were DBPCFC (73%) and a minority (27%) were open. Patient’s characteristics for both groups are shown in Table 1. The majority of the children (86% and 87%) were sensitized to the tested food allergen (sIgE detectable or positive SPT). Almost half of the patients (41%) had never consumed the allergen before, 41% of the patients had IgE mediated symptoms in their history, 10% had non-IgE mediated symptoms, and 8% did not consume the allergen for a longer period and a sensitization was found. For cow’s milk allergy in the study group, only 45% of patients were sensitized, 27% of patients had symptoms of an IgE mediated cow’s milk allergy, and 73% had non-IgE mediated allergy in their history. In both control and study groups, most children (94% and 90%) had other features of the atopic syndrome (asthma, rhinoconjunctivitis, eczema). In the study group there were more peanut challenge tests and less cow’s milk tests. Patients were on average a little younger and fewer patients had eczema.

3.2. Success and Failure of Introduction

No external funding was received for this research.

We acknowledge all the nurses performing the OFC in addition to the dietician who guided some of the patients extensively. 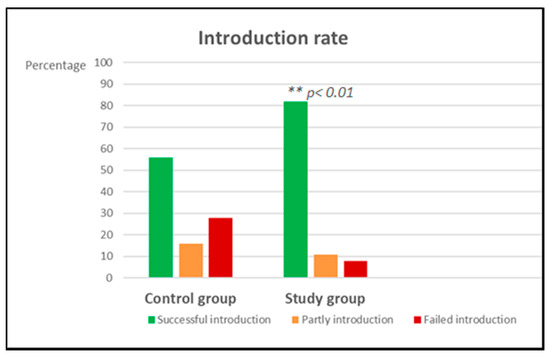 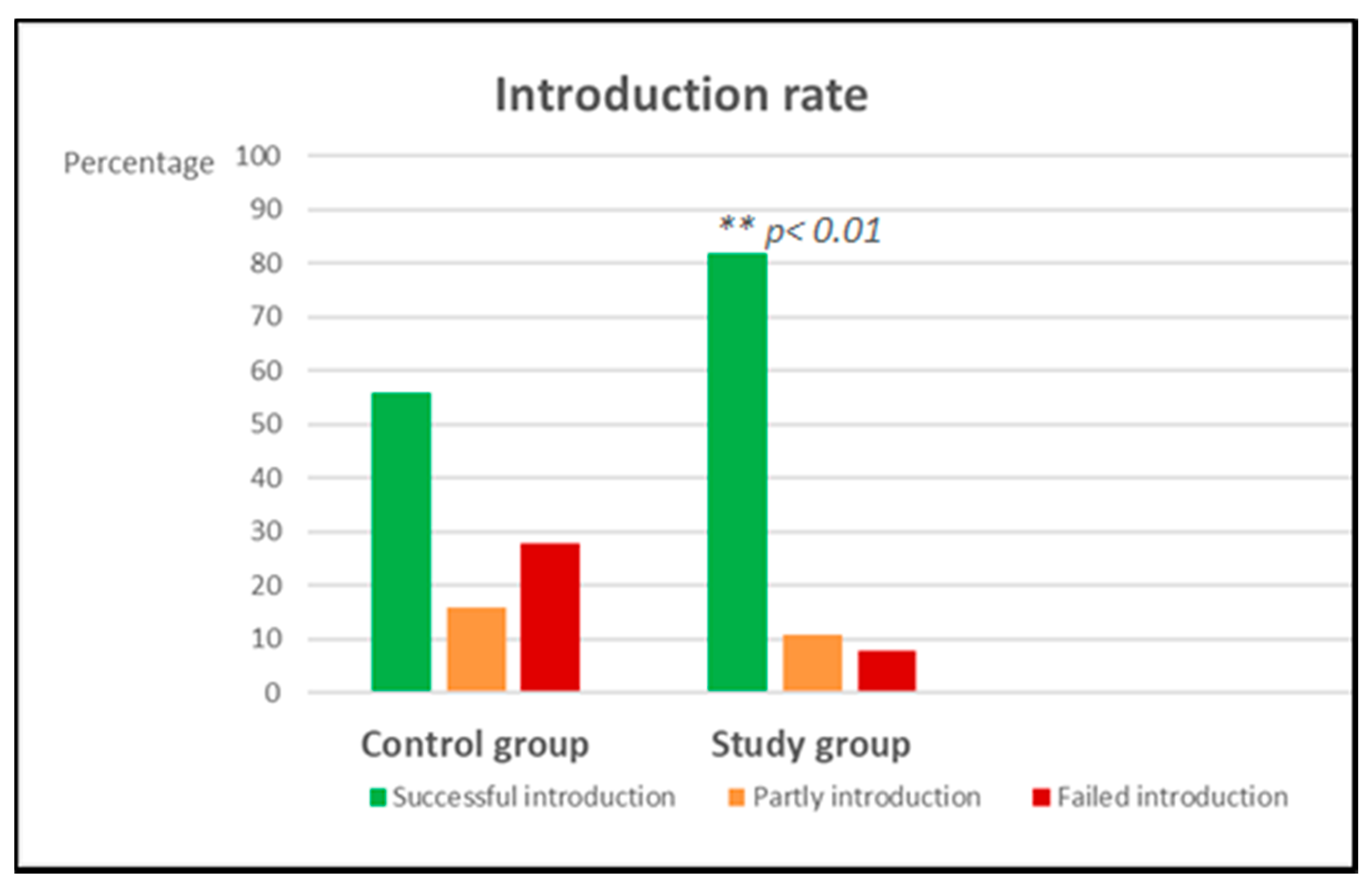 Table 3. Reasons of failed introduction.
Table 3. Reasons of failed introduction.
OFC: Oral food challenges.
© 2020 by the authors. Licensee MDPI, Basel, Switzerland. This article is an open access article distributed under the terms and conditions of the Creative Commons Attribution (CC BY) license (http://creativecommons.org/licenses/by/4.0/).
We use cookies on our website to ensure you get the best experience. Read more about our cookies here.
Accept
We have just recently launched a new version of our website. Help us to further improve by taking part in this short 5 minute survey here. here.
Never show this again