Poor diet quality, commonly measured as a lack of diversity across food groups consumed, is associated with higher nutritional deficiencies globally, and especially in low-income countries [1]. Young children and women are particularly vulnerable to this situation [2,3]. Undernutrition continues to be a serious public health concern in Bangladesh, especially among young children (6–59 months) and women of reproductive age (15–49 years) [4]. The prevalence of overweight and obesity among this group of women is also increasing [5], while micronutrient (essential vitamins and minerals) deficiencies are still widespread across Bangladesh [6,7,8,9]. Common micronutrient deficiencies reported in Bangladesh are vitamin A, iron, calcium, folic acid, zinc, vitamin B12, and iodine [10]. The co-existence of these nutritional problems reflect sub-optimal diets that tend to be high in energy but low in diversity, and particularly low in nutrient-rich foods such as fish, fruits, vegetables, dairy and legumes [10,11,12,13,14,15].
Studies have shown that the diets of smallholder households are often dependent on food supplied from their own production [16,17]. There is some evidence of households’ own horticulture supporting lower micronutrient deficiencies, but evidence of the impact of households’ own livestock production on the intake of key nutrients is mixed depending on the context [18,19,20]. What is more, increased food production at the household level is known to be associated with decreased undernutrition among young children and women, although it is unclear if this relationship is mediated through the direct food consumption pathway [21], via the income pathway or via a combination of both pathways.
One way to increase the intake of nutrient-rich foods in Bangladesh is via increased aquaculture and/or horticulture. Households engaging in such activities may have the potential to improve their diets through direct consumption of nutrient-rich foods (e.g., fish, fruits and vegetables) from their own production and/or indirectly, through purchasing other nutrient-rich diverse foods from the market, through income generated by selling homegrown produce.
This study assesses the diet quality of households in the southwest of Bangladesh, where several development projects have been implemented, including aquaculture and horticulture activities, with the aim of increasing production and improving the nutrition of the household either through the direct and/or indirect pathways of agriculture and nutrition [22]. The aim of the study was to determine whether households actively engaged in both homestead aquaculture and horticulture have better diet quality than those engaged in either one, or households not directly engaged in agriculture. Socio-demographic determinants (educational level and occupation of adult household members, per capita monthly income and daily per capita food expenditure of the household, and women educational level) of diet quality were also studied. This study does not aim to evaluate the impact of any given project or project components; instead, it seeks to understand which types of agricultural practices influence diet quality.

Data for this paper were sourced from the “Bangladesh Aquaculture-Horticulture for Nutrition Research (BAHNR)” study conducted by the Feed the Future Innovation Lab for Nutrition. The BAHNR study collected three rounds of data (at 6-month intervals) as part of a longitudinal observational cohort study. The first round of BAHNR data, collected between January and April 2016, were used for this secondary analysis. The study was conducted in 102 unions (the smallest administrative unit of a subdistrict/division) across three regions (Dhaka, Barisal and Khulna) of southwestern Bangladesh. The study utilized a sampling strategy used previously and rendered a sample that was representative of the United States Agency for International Development (USAID) Feed the Future Zone of Influence [23]. A total of one hundred and two unions were randomly selected from a total of 1115 unions in the three regions. Subsequently, for the purpose of the BAHNR study objectives (unrelated to this paper), these 102 unions were classified into groups by the presence of an exposure (one or more USAID-funded projects or no project implemented in a union) [24]. The study unions were stratified into three groups: group 1, exposed to at least one intervention project (28 unions); group 2, exposed to two or more intervention projects (32 unions); group 3, not exposed to any intervention project (42 unions). In each union, a total of 30 households were randomly selected and followed up on in the three survey rounds.
Household level diet quality was assessed using the preceding seven days’ dietary recall of the household. To calculate household level nutrient intakes, adult male equivalent units (AMEs) were used for the age- and sex-specific intra-household distribution of household intakes. The intake of each nutrient (macro- and micronutrient) was computed for a seven-day period and standardized to obtain a daily intake per household.
The diet quality of the individual was assessed by computing the nutrient adequacy in the diet using the nutrient adequacy ratio (NAR) [25,26]. Mean adequacy ratio (MAR) was computed as an overall measure of diet quality using NAR [25]. Eleven micronutrients: iron, calcium, zinc, vitamin A, thiamine, riboflavin, niacin, vitamin B6, folate, vitamin B12, and vitamin C, in addition to energy, were selected for assessment. These micronutrients reflect key dimensions of diet quality [27], and are considered as the ‘nutrients of concern’ globally [11,28,29].
Ethical approval for the study was obtained from the Bangladesh Medical Research Council, Dhaka, Bangladesh (reference: BMRC/NREC/2013-20161623), as well as the Tufts University Health Sciences Campus Institutional Review Board, in Boston, Massachusetts (IRB# 11954). Prior to enrollment in the study, written consent was obtained from all participants.

Dietary data were collected by locally hired, Bengali-speaking, trained enumerators. The enumerators were trained on a Bengali version of the questionnaire which was used for pre-testing prior data collection. Enumerators had a list of 292 foods, and asked participants if the household consumed each food in the past 7 days. If they responded yes, the enumerator asked follow-up questions, including about the quantity of the food item. Data on the source of the acquired foods (i.e., whether food was home produced, purchased, or was a gift from neighbors/relatives) were also collected. The categories of food items used included cereals, pulses, leafy and non-leafy vegetables, fruits, fish, milk, eggs, meat, spices, drinks and beverages, edible oils, and mixed dishes (e.g., fish/meat/egg and vegetables dishes). Foods eaten away from home and the ingredients of purchased foods were also accounted for.

As household members do not have equitable access to food and/or do not consume the same amounts of food, AME for the age- and sex-specific intra-household distribution of household level dietary intakes was calculated, following the steps outlined by Claro et al. [34]. AMEs were estimated using the mean energy requirements of women and men from 19 to 50 years of age, with moderate physical activity, resulting in a reference value of 2550 kcal per day, as recommended by the national research council [35]. An additional 300 kcal per day was added for pregnant women and 500 kcal per day for lactating women. The AMEs ranged from 0.29 for newborns to 1.18 for men aged 15 to 18 years [34] (Appendix A).

The intake of total household energy and micronutrients (all 11 nutrients) was determined for individual household members, according to the age- and sex-specific AME, in accordance with former studies [36,37]. Subsequently, nutrient intakes were compared with the recommended nutrient intakes of an individual, considering age and sex [38]. Considering the overall composition of diets (mixed diets with fish protein, and unfermented, unrefined cereal grains and flour, high phytate and low ascorbic acid) of rural Bangladeshi people, the cutoffs for the moderate bioavailability of zinc and the 12% bioavailability of iron were used, as suggested by the joint consultation of the Food and Agriculture Organization (FAO) and the World Health Organization (WHO) [38].

NAR for a given nutrient is the ratio of the individual’s intake to the current recommended intake of individual, considering age and sex [26,39]. The NAR values were truncated at 1 so that a nutrient with a NAR greater than 1 could compensate for a nutrient with a lower NAR. MAR was calculated by averaging all truncated NAR values together, as described in Equation 2. Thus, MAR is reported on a scale from 0 to 1, with 0 indicating that the requirement for no nutrients was met, and 1 indicating that the requirements for all nutrients were met [25].

3.4. Diet Quality of Households by Type of Household Engagement with Aquaculture and/or Horticulture

Household engagement in both aquaculture and horticulture was associated with a better-quality diet compared to either or no engagement. The education and occupation of adults and daily per capita food expenditure were important additional determinants of diet quality.

P.W. and S.G. (Shibani Ghosh) conceptualized and designed the BAHNR study, provided oversight on the data collection and analysis; K.H. data management; R.A. conceptualized and designed the study, analyzed the data and prepared the original draft; N.Y. and H.S. contributed to the statistical analysis; P.W., S.G. (Shibani Ghosh); S.G. (Sabi Gurung), K.H., R.S.; S.H.T., H.S., and N.Y. reviewed, edited and contributed to formulating the manuscript. All authors have read and agreed to the published version of the manuscript.

A part of the study was funded by the Japan Society for the Promotion of Science (JSPS) Grants-in-Aid for Scientific Research (KAKENHI) grant number 16H02565.

BAHNR study was supported by the United States Agency for International Development award AID-OAA-LA-14-00012 to the Friedman School of Nutrition Science and Policy at Tufts University. We thank the Feed the Future Innovation Lab for Nutrition, which is funded by the United States Agency for International Development (USAID), for supporting this research. We express the utmost gratitude to Maura Mack, Ahmed Kablan, and Osagie Aimiuwu, without whom this research would not have been possible. We thank Helen Keller International Bangladesh and their administrative/office staff. We are thankful to DATA Pvt. Ltd. and the enumerators, field supervisors, field guides, phlebotomists and local community representatives. We sincerely thank the families from participating households who graciously gave their time to this study. The research presented is a contribution to the Consultative Group for International Agriculture Research (CGIAR) Research Program (CRP) on Fish Agri-Food Systems (FISH), led by WorldFish. 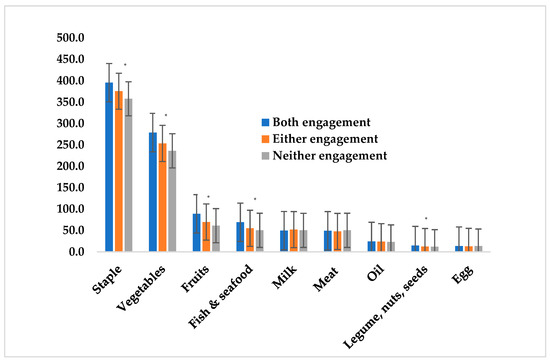 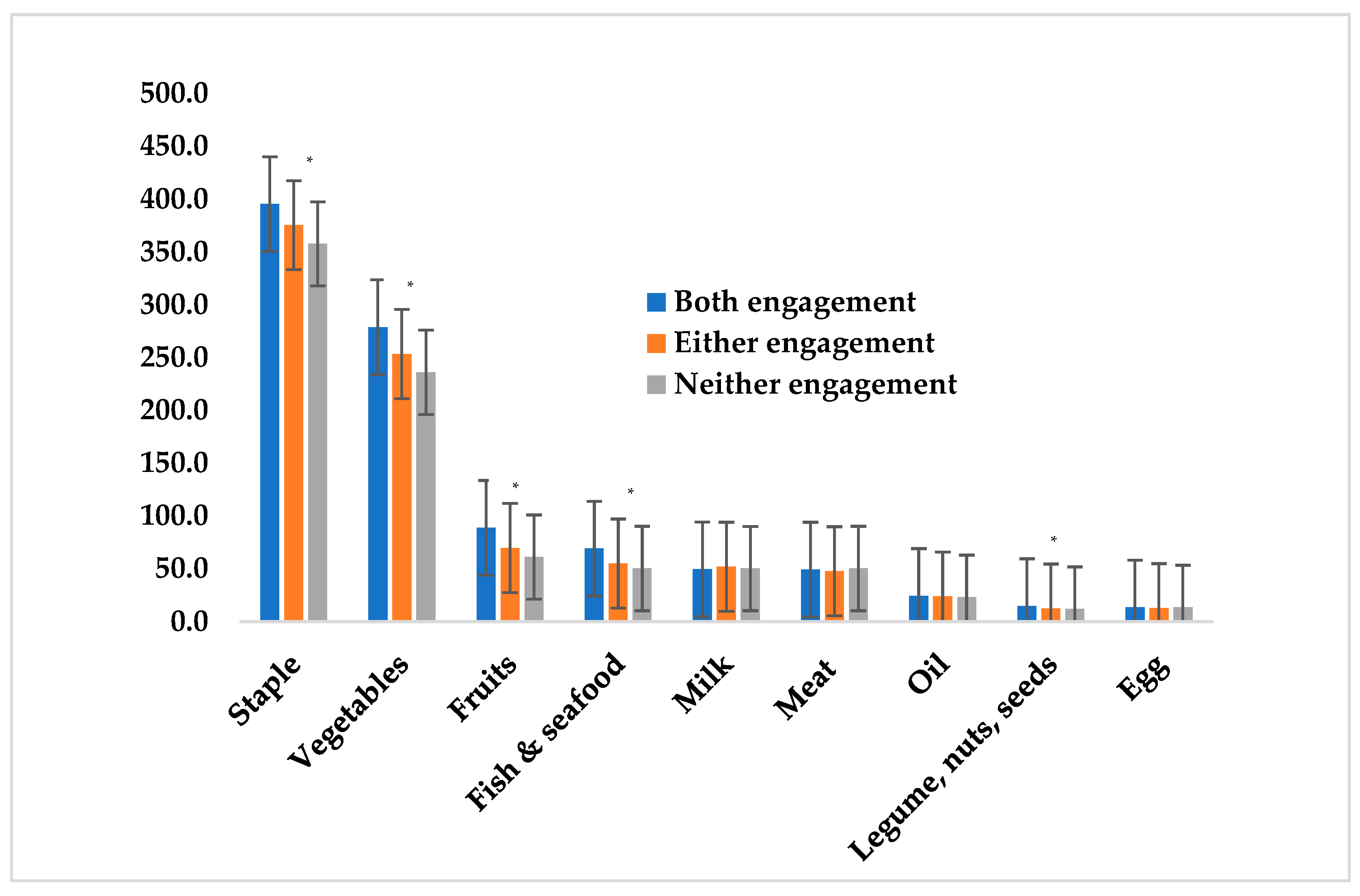