Effects of Dietary Glucose and Fructose on Copper, Iron, and Zinc Metabolism Parameters in Humans
Previous Article in Journal

Background: Prader-Willi syndrome (PWS) is conventionally regarded as a model of genetic obesity carrying a metabolically healthier profile and fat compartmentalization than subjects with non-syndromic obesity. Serum uric acid (sUA) is a recognized surrogate marker of metabolic derangement. As no information is currently available on sUA levels in adults with PWS, we aimed to analyze sUA in a large cohort of adult patients with PWS in comparison to a control counterpart; secondly, we aimed to investigate the metabolic and non-metabolic determinants of sUA in PWS. Methods: A cross-sectional study was conducted on 89 consecutive adult patients with genetically confirmed PWS spanning a wide BMI range (17.2–56.7 kg/m2). As controls, 180 age-, sex- and BMI-matched healthy controls were included. sUA levels were analyzed in relation to the PWS status, metabolic variables, hormone status, body composition, and resting energy expenditure (REE). Bivariate correlation and multivariable regression studies were used to test for predictors of sUA in PWS. Results: Despite having similar BMI values, patients with PWS presented with higher FM (p < 0.0001), lower FFM (p < 0.0001) and REE values than controls (p < 0.0001). In PWS, sUA levels were non-significantly different between subjects with and without obesity (5.4 ± 1.3 vs. 4.9 ± 1.1 mg/dL, p = 0.09), and did not vary significantly in relation to genotype, sex steroid or GH replacement, as well as psychiatric treatments. Rates of hyperuricaemia (19.1% vs. 33.7%, p < 0.01) and absolute sUA levels were lower in patients with PWS compared to controls owing to significant differences between subgroups with obesity (5.5 ± 1.4 vs. 6.6 ± 1.6 mg/dL, p < 0.0001). In merged populations, sUA increased in parallel with age, BMI, FM, FFM, REE, glucolipid homeostasis, and inflammatory markers. In a separate analysis in PWS, however, sUA correlations with BMI, FM, and inflammatory markers were null. Stepwise multivariable regression analysis in the PWS group adjusted for karyotype, age, sex, FM, FFM, obesity, triglycerides, and HDL cholesterol, showed that sUA levels were independently associated with FFM (β = 0.35, p < 0.0001) and, albeit less significantly, with triglycerides (β = 0.23, p < 0.05). The introduction of height-normalized FFM (FFM index) in the regression model, however, abrogated the predictive role of FFM on sUA. Conclusions: FFM mass is a strong predictor of sUA. PWS is associated to lower sUA levels than controls likely due to genetic predisposition to different body composition and healthier metabolic phenotype. Further studies are warranted to assess purine metabolism and the clinical significance of the FFM index in PWS.
Keywords: Prader-Willi syndrome; uric acid; obesity; body composition; fat-free mass; resting energy expenditure; DXA Prader-Willi syndrome; uric acid; obesity; body composition; fat-free mass; resting energy expenditure; DXA

Prader-Willi syndrome (PWS) originates from a defective paternal chromosome 15q11.2–q13 and comprises three main genotypes: paternal 15q11–q13 deletion (type I or II, depending on the proximal breakpoint); maternal uniparental disomy (UPD15); and imprinting defects [1]. With an overall estimated prevalence of 1:10,000–1:30,000, the complex phenotype of PWS embraces a number of neurodevelopmental defects, evolving from muscle hypotonia and failure to thrive in the neonatal stage to progressive developmental impairment, learning disabilities and dysmorphic features during early growth [2]. Often, patients with PWS manifest behavioral problems and obsessive craving for food, which predisposes many patients to severe obesity if hyperphagia is left unrestrained [3]. Delayed motor development and decreased motor performance with impaired muscle mass persist through childhood into adulthood in relation to abnormal body composition and neuromuscular functioning [4]. Also frequent in PWS are complex hypothalamic and endocrine disorders, which predominantly affect the somatotropic and gonadotropic axis for their lifespan [5,6].
In adults, PWS shows an atypical body composition featured by adiposity with subcutaneous fat accumulation, neuromuscular alterations with muscle hypotrophy and hypotonia, which further contribute to scarce propensity to exercise, poor physical performance, and susceptibility to adiposity [4,7,8,9,10]. Despite a trend toward metabolic impairment, the metabolic burden of PWS subjects is somewhat milder than that expected in relation to obesity degree, in terms of insulin resistance [11,12,13], chronic inflammation [14], liver steatosis [15], and metabolic syndrome [16]. Biological mechanisms propelling this apparently advantageous metabolic setting involve peripheral rather than central adiposity [7], diverse metabolomic signatures of adipocytes [17], and distinct profiles of insulin-sensitizing hormones [11,18,19,20,21].
Serum uric acid (sUA) has been long investigated for its dual role as a bystander and promoter of metabolic derangement [22]. Metabolic impairment and obesity are recognized allies of hyperuricemia along with dietary consumption of purine-rich food and insulin resistance, with this latter contributing to reducing sUA clearance [23,24]. Moreover, adipose tissue and, particularly, visceral fat expressed xanthine oxidoreductase, the enzyme catalyzing purines to UA [25]. To date, no study has systematically analyzed sUA and its regulation with respect to genetic, anthropometric, and clinical features of PWS. A previous report in a small cohort of obese patients with PWS allowed us to show lower sUA than BMI-matched controls [20]. The present investigation sought to study sUA levels in a large group of adults with PWS spanning a wide BMI range, to test the potential influence of genetic, anthropometric, and biochemical factors on sUA.

For this study, 89 consecutive patients with PWS were prospectively enrolled. Descriptive data are summarized in the results section Table 1. A diagnosis of PWS was performed on typical clinical features and molecular genetic studies of chromosome 15. We documented 15q11–q13 deletion in 67 (75.2%) and UPD15 in 21 patients (23.6%), while 1 patient had a positive methylation test. As controls, 180 age-, sex, and BMI matched subjects were recruited among the hospital staff and patients admitted to our institution for work-up and rehabilitation of obesity. Following an initial assessment, patients with PWS and controls were included in a 1:2 ratio in an effort to compensate for the syndromic presentation of PWS in terms of body composition and clinical features after excluding subjects with kidney or liver disease, autoimmune disorders, uncontrolled hypothyroidism, pre-existing diabetes mellitus, exposure to glucocorticoids, neoplasms and hematological diseases. For all participants, daily alcohol consumption was estimated at <125 mL. Other exclusion criteria included medications directly interfering with UA levels and hypertriglyceridemia. It should be reminded, however, that only 19 patients with PWS were free of pharmacological treatments; in the remainder, endocrine treatments included sex steroids in 33, growth hormone in 22, levothyroxine in 11, and cortisone in 2 cases; other therapies encompassed triclyclic antidepressants and antipsychotic therapies in 28, SSRI in 9, anti-hypertensive drugs in 11, bisphosphonates in 2, thionamides in 1 and DOAC in another case. Among controls, all women were premenopausal as assessed by a personal history of regular menses, and 21 were taking oral estro-progestins. All subjects, or their parents/guardians for patients with PWS, gave their informed consent for inclusion before they participated in the study. The study was conducted in accordance with the Declaration of Helsinki, and the protocol was approved by the Ethics Committee of Istituto Auxologico Italiano (ref. no. 01C025; acronym: PWSIPMET).

All subjects underwent body measurements wearing light underwear, in fasting conditions after voiding. Weight and height were measured to the nearest 0.1 kg and 0.1 cm, respectively, using standard methods. BMI was expressed as body mass (kg)/height (m2). Obesity was defined for any BMI over 30 kg/m2. Waist circumference (WC) was determined in standing position midway between the lowest rib and the top of the iliac crest after gentle expiration, with a non-elastic flexible tape measure.
The respiratory quotient (RQ; VO2/VCO2) and resting energy expenditure (REE; kcal/24 h) were determined in a thermo-regulated room (22–24 °C) by computed open-circuit indirect calorimetry, measuring resting oxygen uptake and resting carbon dioxide production by a ventilated canopy (Sensormedics, Milan, Italy) at 1-min intervals for 30 min and expressed as a 24-h value. All tests were performed between 07:30 and 09:00 a.m. after voiding, with patients in fasting condition, after avoiding any physical and non-physical activity (smoking, drinking) potentially interfering with an appropriate calorimetric assessment. The test was conducted by certified nurses and consists of making each patient lie down relaxed on a comfortable armchair, with the head under a transparent hood connected to a pump, which applies adjustable ventilation through it. Exhaled gas dilutes with the fresh air ventilated under the hood and a sample of this mixture is conveyed to the analyzers, through a capillary tube and analyzed. Ambient and diluted fractions of O2 and CO2 are measured for a known ventilation rate, and O2 consumption (VO2) and CO2 production (VCO2) are determined. Energy expenditure (EE) was calculated according to Weir’s equation:
EE = 5.68 VO2 + 1.59 VCO2 − 2.17 Nu (where Nu is urinary nitrogen).
As short-term urinary collections to assess total nitrogen excretion (Nu) may not be representative of the protein oxidized during the measurement itself, they were not obtained in this study and assumed to be 13 g/24 h [26]. The predicted REE (pREE) was calculated by the Harris-Benedict formula and allowed to test for metabolic efficiency, calculated as the ratio between measured/predicted REE values, as previously reported [27].
A dual-energy X-ray absorptiometry (DEXA; GE Lunar, Madison, WI, USA) was performed for the assessment of body composition. Exams were performed by certified radiological technologists blinded with regards to the study protocol and laboratory data. Daily calibrations of the machine were conducted as per manufacturer’s instructions. Total and regional scans were taken for each participant. For this study, percent body fat mass (% FM) and fat-free mass (FFM, kg) were considered of interest.

Statistical analysis was performed using SPSS version 21 (Somers, NY, USA). Values are expressed as mean ± SE or percentage. Data points not normally distributed obtained by the Shapiro-Wilk test were log-transformed to improve the symmetry and homoscedasticity of the distribution. For comparative analysis, the Student’s t-test for unpaired data and analysis of variance for parametric and Mann–Whitney test for nonparametric data were used as appropriate.
Pearson’s correlation analysis and the chi-square test were used to identify significant associations between variables of interest. Using merged and separate datasets from study groups, binary logistic and stepwise multivariable regression analyses were developed to test the relationship of hyperuricemia, PWS status, or sUA levels with a number of independent variables, i.e., PWS karyotype (DEL15 = 0; UPD15 = 1), age, sex (female = 0, male = 1), BMI or obesity (BMI > 30 kg/m2), percent FM and FFM expressed in kilograms. Regression models were developed to avoid collinearity. Odds ratio, β coefficients and related significance values obtained from the models are reported. Significance was set at p < 0.05.

While PWS predisposes to genetic obesity and serum UA is seen as a conventional predictor of cardiometabolic derangement, hyperuricemia is less prevalent in an adult population with PWS with a high prevalence of obesity, when compared to a BMI-matched control population. Fat-free mass is a strong determinant of serum uric acid levels in PWS, potentially due to peculiarities in muscle structure and muscle mass.

We are grateful to the patients with PWS and their families for their willingness to participate in this research. Our special thanks to the Italian Prader-Willi Syndrome Association for its collaboration. 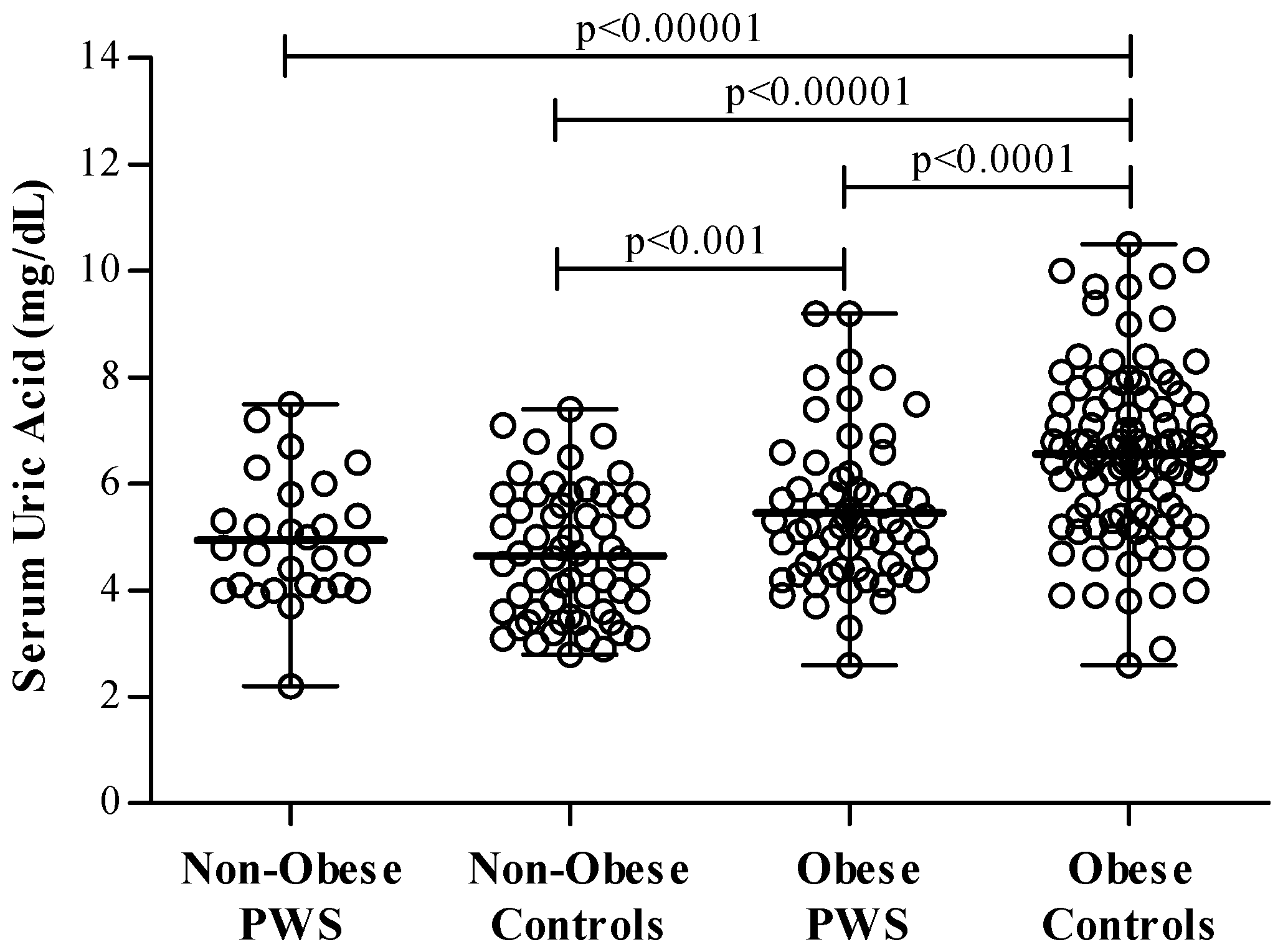