The aim of this study was to test the effect of a plant-based dietary intervention on beta-cell function in overweight adults with no history of diabetes. Participants (n = 75) were randomized to follow a low-fat plant-based diet (n = 38) or to make no diet changes (n = 37) for 16 weeks. At baseline and 16 weeks, beta-cell function was quantified with a mathematical model. Using a standard meal test, insulin secretory rate was calculated by C-peptide deconvolution. The Homeostasis Model Assessment (HOMA-IR) index was used to assess insulin resistance while fasting. A marked increase in meal-stimulated insulin secretion was observed in the intervention group compared with controls (interaction between group and time, Gxt, p < 0.001). HOMA-IR index fell significantly (p < 0.001) in the intervention group (treatment effect −1.0 (95% CI, −1.2 to −0.8); Gxt, p = 0.004). Changes in HOMA-IR correlated positively with changes in body mass index (BMI) and visceral fat volume (r = 0.34; p = 0.009 and r = 0.42; p = 0.001, respectively). The latter remained significant after adjustment for changes in BMI (r = 0.41; p = 0.002). Changes in glucose-induced insulin secretion correlated negatively with BMI changes (r = −0.25; p = 0.04), but not with changes in visceral fat. Beta-cell function and insulin sensitivity were significantly improved through a low-fat plant-based diet in overweight adults.
Keywords: beta-cell function; diet; nutrition; diabetes; vegan beta-cell function; diet; nutrition; diabetes; vegan

Impairment of pancreatic beta-cell function, typically preceded by insulin resistance in muscle and liver cells, is a key factor in type 2 diabetes [1]. Improvements in beta-cell function, however, are not typically a goal of diabetes treatment. Beta-cell failure reflects a relative loss of beta-cell mass due to apoptosis [2], as well as selective loss of sensitivity to glucose, along with the loss of first-phase insulin secretion [3]. Limited data suggest that beta-cell function and beta-cell mass may be influenced by diet [4,5,6] and physical activity [4].
Methods used for quantifying beta-cell function include the homeostasis model assessment (HOMA), oral glucose tolerance tests, intravenous glucose tolerance tests, hyperglycemic clamp, and standard meal tolerance tests. No single test allows beta-cell function to be assessed with accuracy and specificity comparable to those of insulin sensitivity. Therefore, mathematical modeling is necessary to interpret parameters of beta-cell function in all of the mentioned methods. The use of oral glucose tolerance tests or standard meal tests has been preferred due to simplicity but also for physiological significance, as they include the gastrointestinal incretin effect that follows oral nutrient ingestion [7,8].
Several prospective studies have demonstrated that diabetes prevalence is 46–74% lower among individuals following plant-based diets, compared with the general (non-vegetarian) population, even after adjustment for differences in BMI [5,6,9]. In addition, a vegan diet has been shown to improve glycemic control in type 2 diabetes compared with a more conventional hypocaloric, carbohydrate-controlled diet [10,11]. These studies raise the question as to whether such a diet intervention could improve beta-cell function and insulin sensitivity. The aim of this study was to test the effect of a dietary intervention on beta-cell function and insulin resistance in overweight adults with no history of diabetes.

The study was conducted between October 2016 and June 2017 in Washington, DC, using a single-center, randomized, open parallel study. Men and women, aged 25 to 75 years, with a body-mass index between 28 and 40 kg/m2, were enrolled. Exclusion criteria were history of diabetes, smoking, alcohol or drug abuse, pregnancy or lactation, and current use of a vegan diet. The study protocol was approved by the Chesapeake Institutional Review Board on 12 October 2016. The protocol identification number is Pro00018983. All participants gave written informed consent. Trial Registration: ClinicalTrials.gov number, NCT02939638.

The participants were randomly assigned in a 1:1 ratio to an intervention group or a control group. Participants were examined at baseline and at 16 weeks.
The intervention group was asked to follow a low-fat vegan diet (~75% of energy from carbohydrates, 15% protein, and 10% fat) consisting of vegetables, grains, legumes, and fruits. Participants were instructed to avoid animal products and added fats. Daily fat intake was 20–30 g to ensure adequate intake of essential fatty acids. No meals were provided. Vitamin B12 was supplemented (500 µg/day). The control group was asked to make no diet changes. Alcoholic beverages were limited to one per day for women and two per day for men in both groups.
To monitor adherence, a 3-day dietary record was completed by each participant at baseline and at 16 weeks. Dietary intake data were collected and analyzed by a registered dietician, using Nutrition Data System for Research version 2016, developed by the Nutrition Coordinating Center (NCC), University of Minnesota, Minneapolis, MN, USA [12]. In addition, study dietitians made unannounced telephone calls to assess participants’ dietary adherence. All study participants were asked not to alter their exercise habits, and to continue their preexisting medication regimens for the duration of the study, except as modified by their personal physicians. Physical activity was assessed by the International Physical Activity Questionnaire (IPAQ) [13].

All measurements were performed at baseline and 16 weeks on an outpatient basis, after a 10–12 h overnight water-only fast. Height and weight were measured using a stadiometer and a periodically calibrated scale accurate to 0.1 kg, respectively. Body composition was assessed using a DXA scan (iDXA; GE Healthcare, Chicago, IL, USA).
Insulin secretion was assessed after stimulation with a liquid breakfast (Boost Plus, Nestle, Vevey, Switzerland; 720 kcal, 34% of energy from fat, 16% protein, 50% carbohydrate). Plasma concentrations of glucose, immunoreactive insulin, and C-peptide were measured at 0, 30, 60, 120, and 180 min. Serum glucose was analyzed using the Hexokinase UV endopoint method (Roche, Basel, Switzerland). Plasma immunoreactive insulin and C-peptide concentrations were determined using insulin and C-peptide electro-chemiluminescence immunoassay (ECLIA) kits (Roche, Basel, Switzerland). HbA1c was measured by turbidimetric inhibition immunoassay (Roche, Basel, Switzerland). Plasma lipids concentrations were measured by enzymatic colorimetric methods (Roche, Basel, Switzerland).
The primary outcome was beta-cell function assessed by a mathematical model [14,15,16], as follows: Insulin secretory rates were calculated from plasma C-peptide concentrations by deconvolution [14] and expressed per square meter of estimated body surface area. The dependence of insulin secretory rates on glucose concentrations was modeled separately for each participant and each study day.
Insulin secretion consists of two components. The first represents the static dependence of insulin secretion on glucose concentration and is characterized by a dose-response function. Its parameters are insulin secretion at 5 mmol/L glucose (fasting glucose level) and mean slope in the glucose range. The dose response is modulated by a potentiation factor, quantified as the ratio between 160–180 and 0–20 min values. The second component represents a dynamic dependence of insulin secretion on the rate of change of glucose and is determined by the rate sensitivity [15,16]. The model parameters (i.e., the parameters of the dose response, and the potentiation factor) were estimated from glucose and C-peptide concentration by regularized least squares [14,15,16]. Regularization involves the choice of smoothing factors that were selected to obtain glucose and C-peptide model residuals with standard deviations close to the expected measurement error (~1% for glucose and ~5% for C-peptide). C-peptide has been used for the calculation of insulin secretion, as it is secreted with insulin in an equimolar fashion, but does not undergo liver elimination. Therefore, plasma C-peptide provides a more accurate estimation of insulin secretion. Plasma insulin has been used for the assessment of insulin sensitivity, both in fasting and stimulated conditions. Estimation of the individual model parameters was performed by an investigator masked to group assignment.
The secondary outcome was insulin resistance calculated as Homeostasis Model Assessment (HOMA-IR) index [17]. In addition, oral glucose insulin sensitivity index was calculated as a measure of dynamic postprandial insulin sensitivity [18].

The intention-to-treat analysis included all participants, regardless of their subsequent withdrawal or non-adherence to the prescribed diet [19]. A repeated measure ANOVA model was used to test the between-group differences from baseline to 16 weeks with between-subject and within-subject factors and interactions. Group, subject and time were included in the model. Interaction between group and time (Gxt) was calculated for each variable. For the dose-response analysis of insulin secretion as a function of plasma glucose concentrations, glucose concentration was added to the ANOVA model. Within each group, paired comparison t-tests were calculated to test whether the changes from baseline to 16 weeks were statistically significant. Pearson correlations were calculated for the relationship between changes in HOMA-IR and beta-cell function, and changes in BMI and volume of visceral fat.

3.1. Characteristics of the Participants

Of 1082 people screened by telephone, 75 met the participation criteria and were randomly assigned to the intervention (n = 38) or control (n = 37) groups, and 96% of participants completed the study. Two participants dropped out of the control group and one from the intervention group, all for reasons not related to the diet (Figure 1). Demographic characteristics are listed in Table 1. Baseline physical activity, dietary intake, anthropometric and laboratory variables, parameters of insulin resistance and beta-cell function, as well as their changes in response to the intervention are shown in Table 2.

3.7. The Effect of BMI and Adiposity

In conclusion, we have demonstrated that beta-cell function and fasting insulin sensitivity can be modified by a 16-week dietary intervention. Our study suggests the potential of a low-fat plant-based diet in diabetes prevention, addressing both core pathophysiologic mechanisms—insulin resistance and diminished beta-cell function—at the same time.

We thank our participants for their contribution to this study, as well as registered dieticians Susan Levin, Karen Smith and Maggie Neola, for providing both group and individual nutrition counselling, and our research staff (Manuel Calcagno, Melissa Busta, Rosendo Flores, Joshika Money and Mallory Vial) for their contribution to data collection. This work was funded by the Physicians Committee for Responsible Medicine.

H.K. and N.B. designed the study, applied for an Ethics Committee approval, recruited the participants, collected the data and wrote the manuscript. A.T. was involved in acquisition of the data and mathematical modelling of beta-cell function. M.H. and R.H. carried out the statistical analyses and interpretation of data. All authors had full access to data and revised and approved the manuscript for publication. The guarantor is N.B.

Hana Kahleova works as the Director of Clinical Research at the Physicians Committee for Responsible Medicine, a nonprofit organization encouraging the use of low-fat, plant-based diets and discouraging the use of animal-derived, fatty, and sugary foods. Barnard has received research funding from the National Institute of Diabetes and Digestive and Kidney Diseases (NIH), the National Science Foundation, and the Diabetes Action Research and Education Foundation. He serves without financial compensation as president of the Physicians Committee for Responsible Medicine and Barnard Medical Center, nonprofit organizations providing education, research, and medical care related to nutrition. He writes books and gives lectures related to nutrition and health, and has received royalties and honoraria from these sources. Andrea Tura, Martin Hill and Richard Holubkov declare no conflict of interest. 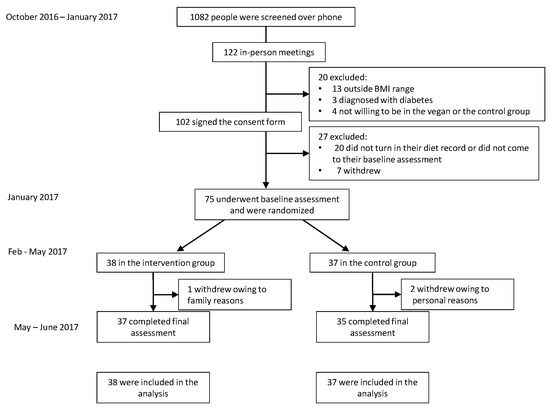 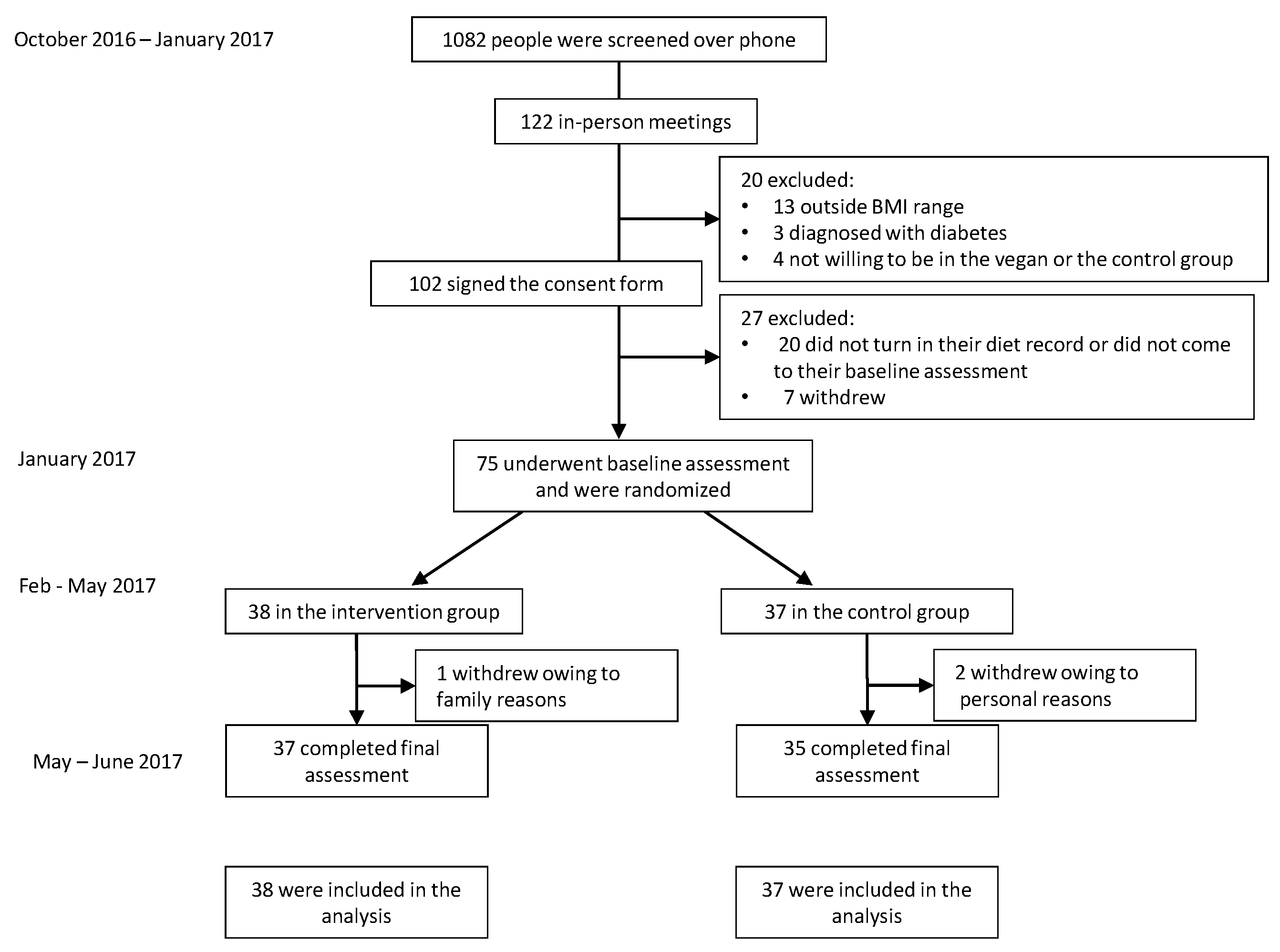 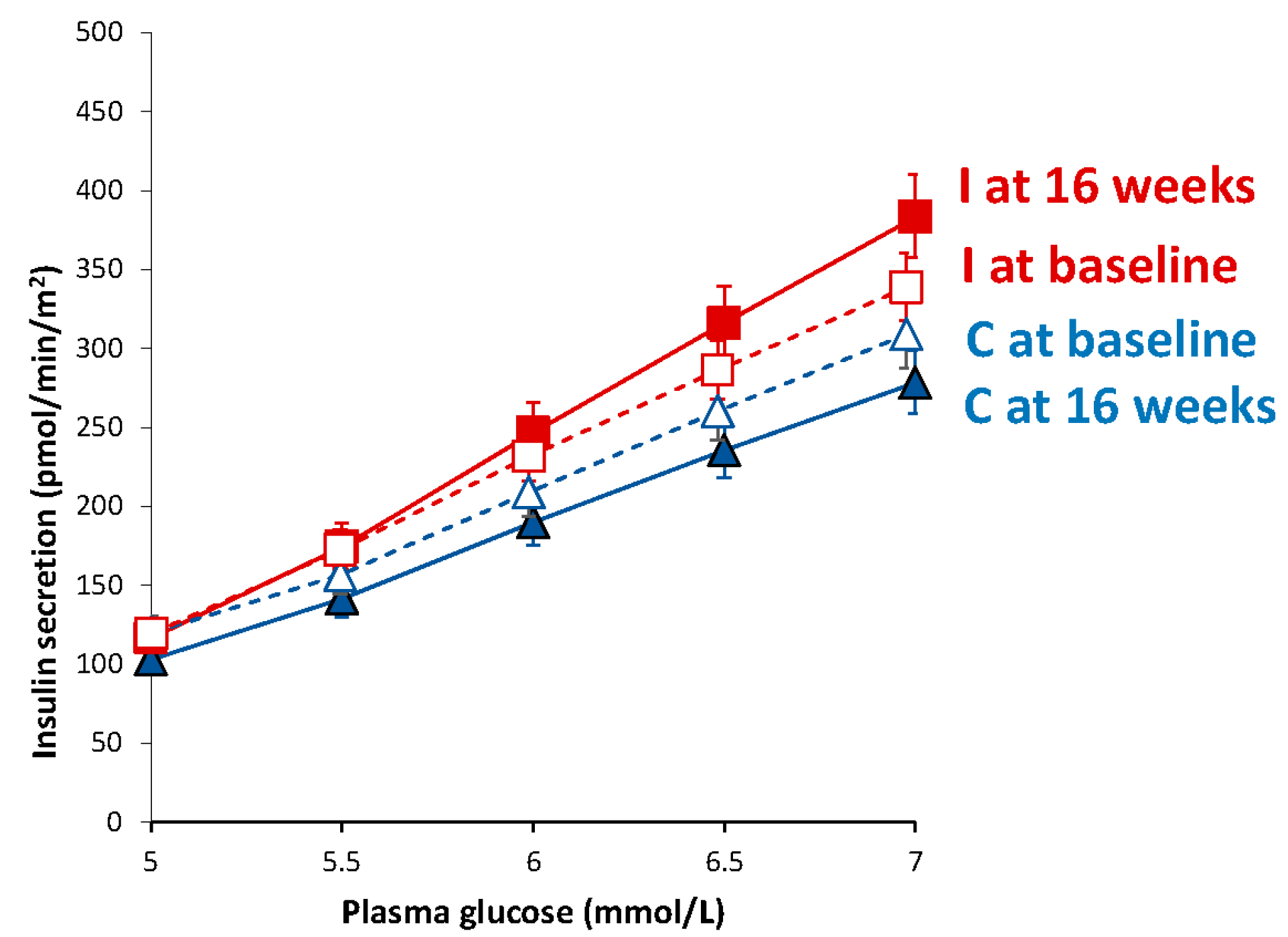