Pre-Meal Effect of Whey Proteins on Metabolic Parameters in Subjects with and without Type 2 Diabetes: A Randomized, Crossover Trial

Traditional Malian Solid Foods Made from Sorghum and Millet Have Markedly Slower Gastric Emptying than Rice, Potato, or Pasta

From anecdotal evidence that traditional African sorghum and millet foods are filling and provide sustained energy, we hypothesized that gastric emptying rates of sorghum and millet foods are slow, particularly compared to non-traditional starchy foods (white rice, potato, wheat pasta). A human trial to study gastric emptying of staple foods eaten in Bamako, Mali was conducted using a carbon-13 (13C)-labelled octanoic acid breath test for gastric emptying, and subjective pre-test and satiety response questionnaires. Fourteen healthy volunteers in Bamako participated in a crossover design to test eight starchy staples. A second validation study was done one year later in Bamako with six volunteers to correct for endogenous 13C differences in the starches from different sources. In both trials, traditional sorghum and millet foods (thick porridges and millet couscous) had gastric half-emptying times about twice as long as rice, potato, or pasta (p < 0.0001). There were only minor changes due to the 13C correction. Pre-test assessment of millet couscous and rice ranked them as more filling and aligned well with postprandial hunger rankings, suggesting that a preconceived idea of rice being highly satiating may have influenced subjective satiety scoring. Traditional African sorghum and millet foods, whether viscous in the form of a thick porridge or as non-viscous couscous, had distinctly slow gastric emptying, in contrast to the faster emptying of non-traditional starchy foods, which are popular among West African urban consumers. View Full-Text
Keywords: Africa; staple foods; gastric emptying; satiety; sustained energy Africa; staple foods; gastric emptying; satiety; sustained energy
►▼ Show Figures 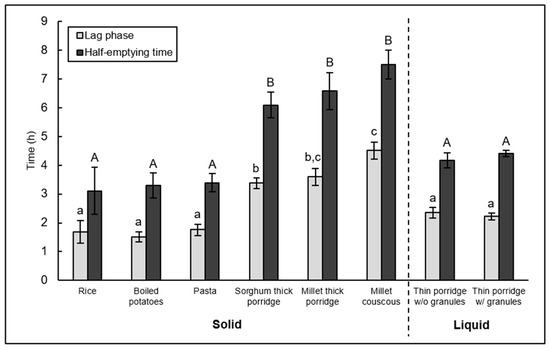