The region merging algorithm is a widely used segmentation technique for very high resolution (VHR) remote sensing images. However, the segmentation of post-earthquake VHR images is more difficult due to the complexity of these images, especially high intra-class and low inter-class variability among damage objects. Herein two key issues must be resolved: the first is to find an appropriate descriptor to measure the similarity of two adjacent regions since they exhibit high complexity among the diverse damage objects, such as landslides, debris flow, and collapsed buildings. The other is how to solve over-segmentation and under-segmentation problems, which are commonly encountered with conventional merging strategies due to their strong dependence on local information. To tackle these two issues, an adaptive dynamic region merging approach (ADRM) is introduced, which combines an adaptive spectral-spatial descriptor and a dynamic merging strategy to adapt to the changes of merging regions for successfully detecting objects scattered globally in a post-earthquake image. In the new descriptor, the spectral similarity and spatial similarity of any two adjacent regions are automatically combined to measure their similarity. Accordingly, the new descriptor offers adaptive semantic descriptions for geo-objects and thus is capable of characterizing different damage objects. Besides, in the dynamic region merging strategy, the adaptive spectral-spatial descriptor is embedded in the defined testing order and combined with graph models to construct a dynamic merging strategy. The new strategy can find the global optimal merging order and ensures that the most similar regions are merged at first. With combination of the two strategies, ADRM can identify spatially scattered objects and alleviates the phenomenon of over-segmentation and under-segmentation. The performance of ADRM has been evaluated by comparing with four state-of-the-art segmentation methods, including the fractal net evolution approach (FNEA, as implemented in the eCognition software, Trimble Inc., Westminster, CO, USA), the J-value segmentation (JSEG) method, the graph-based segmentation (GSEG) method, and the statistical region merging (SRM) approach. The experiments were conducted on six VHR subarea images captured by RGB sensors mounted on aerial platforms, which were acquired after the 2008 Wenchuan Ms 8.0 earthquake. Quantitative and qualitative assessments demonstrated that the proposed method offers high feasibility and improved accuracy in the segmentation of post-earthquake VHR aerial images. View Full-Text
Keywords: post-earthquake image segmentation; adaptive spectral-spatial descriptor; dynamic region merging post-earthquake image segmentation; adaptive spectral-spatial descriptor; dynamic region merging
►▼ Show Figures 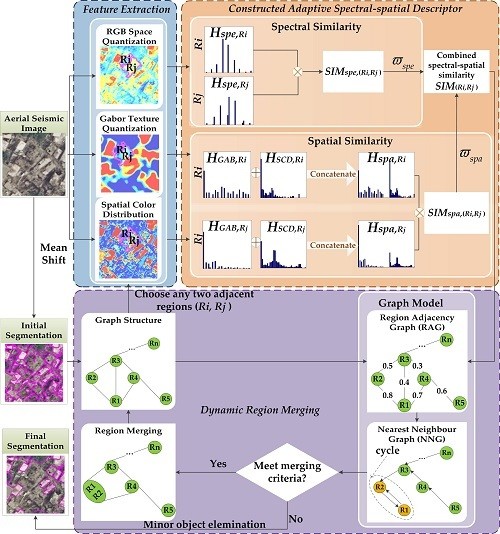