The primary measure of the quality of sea surface temperature (SST) fields obtained from satellite-borne infrared sensors has been the bias and variance of matchups with co-located in-situ values. Because such matchups tend to be widely separated, these bias and variance estimates are not necessarily a good measure of small scale (several pixels) gradients in these fields because one of the primary contributors to the uncertainty in satellite retrievals is atmospheric contamination, which tends to have large spatial scales compared with the pixel separation of infrared sensors. Hence, there is not a good measure to use in selecting SST fields appropriate for the study of submesoscale processes and, in particular, of processes associated with near-surface fronts, both of which have recently seen a rapid increase in interest. In this study, two methods are examined to address this problem, one based on spectra of the SST data and the other on their variograms. To evaluate the methods, instrument noise was estimated in Level-2 Visible-Infrared Imager-Radiometer Suite (VIIRS) and Advanced Very High Resolution Radiometer (AVHRR) SST fields of the Sargasso Sea. The two methods provided very nearly identical results for AVHRR: along-scan values of approximately 0.18 K for both day and night and along-track values of 0.21 K for day and night. By contrast, the instrument noise estimated for VIIRS varied by method, scan geometry and day-night. Specifically, daytime, along-scan (along-track), spectral estimates were found to be approximately 0.05 K (0.08 K) and the corresponding nighttime values of 0.02 K (0.03 K). Daytime estimates based on the variogram were found to be 0.08 K (0.10 K) with the corresponding nighttime values of 0.04 K (0.06 K). Taken together, AVHRR instrument noise is significantly larger than VIIRS instrument noise, along-track noise is larger than along-scan noise and daytime levels are higher than nighttime levels. Given the similarity of results and the less stringent preprocessing requirements, the variogram is the preferred method, although there is a suggestion that this approach overestimates the noise for high quality data in dynamically quiet regions. Finally, simulations of the impact of noise on the determination of SST gradients show that on average the gradient magnitude for typical ocean gradients will be accurately estimated with VIIRS but substantially overestimated with AVHRR. View Full-Text
Keywords: spatial precision; sea surface temperature; VIIRS; AVHRR spatial precision; sea surface temperature; VIIRS; AVHRR
►▼ Show Figures 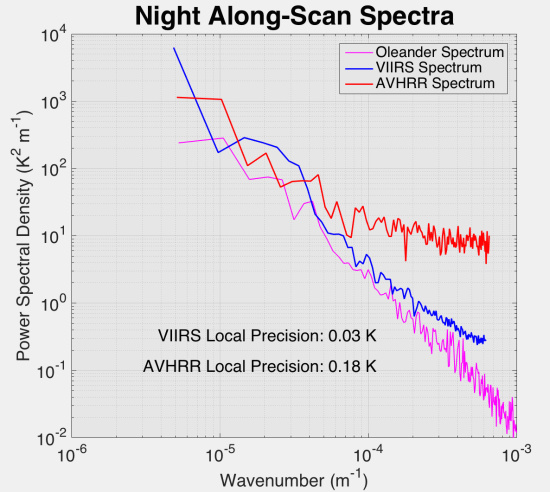