The wider Athens metropolitan area serves as an interesting setting for conducting geodetic studies. On the one hand, it has a complex regional geotectonic characteristic with several active and blind faults, one of which gave the deadly 5.9 Athens earthquake on September 1999. On the other hand, the Greek capital is heavily urbanized, and construction activities have been taking place in the last few decades to address the city’s needs for advanced infrastructures. This work focuses on estimating ground velocities for the wider Athens area in a period spanning two decades, with an extended spatial coverage, increased spatial sampling of the measurements and at high precision. The aim is to deliver to the community a reference geodetic database containing consistent and robust velocity estimates to support further studies for modeling and multi-hazard assessment. The analysis employs advanced persistent scatterer interferometry methods, covering Athens with both ascending and descending ERS-1, ERS-2 and Envisat Synthetic Aperture Radar data, forming six independent interferometric stacks. A methodology is developed and applied to exploit track diversity for decomposing the actual surface velocity field to its vertical and horizontal components and coping with the post-processing of the multi-track big data. Results of the time series analysis reveal that a large area containing the Kifisia municipality experienced non-linear motion; while it had been subsiding in the period 1992–1995 (−12 mm/year), the same area has been uplifting since 2005 (+4 mm/year). This behavior is speculated to have its origin on the regional water extraction activities, which when halted, led to a physical restoration phase of the municipality. In addition, a zoom in the area inflicted by the 1999 earthquake shows that there were zones of counter-force horizontal movement prior to the event. Further analysis is suggested to investigate the source and tectonic implications of this observation. View Full-Text
Keywords: PSI; track diversity; urban geodetic monitoring; subsidence rebound; Athens earthquake PSI; track diversity; urban geodetic monitoring; subsidence rebound; Athens earthquake
►▼ Show Figures 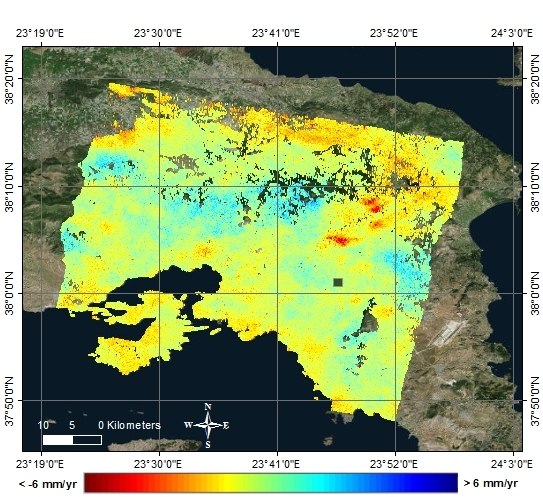