A downscaling and integration experiment is conducted using coarse resolution satellite precipitation products and rain gauge data acquired over South Korea. Six TRMM 3B43 products acquired from May–October in 2013 were used as the satellite-derived precipitation estimates. Using TRMM products from May–October, not all 12 months, is based on the precipitation characteristics in South Korea. Seasonally, 50%–60% of annual precipitation falls in summer, and the winter precipitation is less than 10% of the total annual precipitation [34]. As part of the summer East-Asian Monsoon system, a rainy season due to stationary front rain, locally known as the Changma in Korea, starts in late June and continues until late July, bringing frequent heavy rainfall [34,35]. Typhoons also have influences on the Korean peninsula from June–October [34]. By considering these precipitation characteristics in South Korea, TRMM products from May–October in 2013 were chosen for this experiment.
The original monthly TRMM data at a resolution of 0.25° were first geocoded using a transverse Mercator projection with a spatial resolution of 25 km. The monthly accumulated precipitation at a mm scale was finally prepared for integration with the rain gauge data. Monthly accumulated rainfall measurements obtained from 71 automated synoptic observing systems (ASOS) over South Korea were used for integrating and validating the prediction results (Figure 1). ASOS data are available mainly over land, so the integration and downscaling results were generated only over land. The target resolution for downscaling was set experimentally to 1 km.

The geostatistical downscaling and integration approach employed in this study comprises two analytical steps (Figure 2): (1) downscaling of TRMM precipitation products using ATP kriging and (2) integration of rain gauge data with the downscaled TRMM precipitation products using multivariate kriging. A detailed description of each step is given in the following.

After the TRMM precipitation product has been downscale to 1 km, it can be compared directly with the rain gauge data. Thus, the next step is to integrate and adjust the downscaled product with rain gauge data. Three multivariate kriging algorithms are used for integration in this study, i.e., SKLM, KED and CM. In these algorithms, rain gauge and downscaled TRMM product are regarded as point hard and exhaustive soft data, respectively. CK has been widely used for integrating hard and soft data, but it is not considered in this study because it requires more variogram modeling effort.

3.2.2. Kriging with an External Drift

KED is a multivariate kriging algorithm that can be applied when exhaustive soft data are available on a regular grid [39]. Similar to SKLM, KED also uses exhaustive downscaled TRMM precipitation estimates to derive varying local means, but KED differs from SKLM in that the soft data should have a linear relationship with the hard data, where the linear relationship is implicitly re-estimated by the kriging system. In other words, constant global regression coefficients are applied to the downscaled TRMM precipitation to derive the local means in SKLM, whereas the regression coefficients are locally re-estimated in KED. The KED estimates are computed as follows.
It should be noted that the regression coefficients and downscaled TRMM precipitation data are not included in Equation (5) because the locally re-estimated regression coefficients are generally used for interpretation purposes [3,39], rather than for the KED estimates.
The kriging weights are computed using the following KED kriging system: where and are two Lagrange multipliers for the constraints on the weights, and is the covariance of the residuals.
Unlike SKLM where the residuals are available at rain gauges, the residuals are not available in KED, so the residual variogram is not available. Several methods have been proposed for inferring the residual variogram. Since the trends or local means are already explained by exhaustive soft data, the residual variogram should be inferred from sample data pairs that are not affected or slightly affected by the trend [39] (p. 195). By following the practice of previous studies [40,41], the residual variogram inferred in SKLM was used for KED in the present study.

This study was initiated to investigate whether merging rain gauge data and the satellite precipitation product could improve the predictive performance in fine resolution mapping of precipitation. For this purpose, different rain gauge density scenarios are considered in the performance evaluation. The impact of the rain gauge density scenarios on the predictive performance of different kriging algorithms is evaluated using leave-one-out cross-validation (LOO CV). Four sampling density scenarios were considered in this study: 100% (referred to as S100), 75% (S75), 50% (S50) and 25% (S25) of 71 rain gauges. If random sampling is applied to each density scenario, the predictive performance might be affected greatly by sampling fluctuations. Thus, to reduce the impact of the sampling fluctuations caused by random sampling, a systematic procedure to select representative rain gauges [30] is employed. The sum of the distances to the four nearest rain gauges is first computed. The rain gauges with the minimum distance (i.e., too close to neighbors) are then removed. However, when this principle is directly applied to rain gauges in the study area, as shown in Figure 1, most of the rain gauges near the coast are selected, and others on land are removed in S25. To avoid this problem, the selection procedure is serially repeated with respect to the remaining rain gauges. Therefore, the rain gauges with the maximum distance are retained, and the rain gauges in the low density scenario are always included in all of the other scenarios. The distributions of the rain gauges in each scenario are shown in Figure 3.
The error statistics are calculated based on LOO CV for each scenario. The relative mean bias (rME), root mean squared errors (RMSE) and relative RMSE (rRMSE) are computed as quantitative measures of errors. rME measures the relative degree of bias, whereas the latter two metrics measure the magnitude of errors. The amount of accumulated precipitation varies per month, so rRMSE is computed to compare the predictive performance for each month. To investigate the effects of integrating TRMM precipitation estimates, the relative improvement index (RI), which measures the improvement in RMSE compared with that in OK using only rain gauges, is also computed. Kriging is a generalized least square interpolator, so a smoothing effect is frequently observed in the predictions. To quantitatively measure the magnitude of the smoothing effect, the relative variance (rVar) is also computed. If any interpolator yields less smoothing effect, the value of rVar is close to 100%. If and are the predicted and true precipitation values at rain gauges, respectively, the equations of the measures above are as follows: where n and are the total number of rain gauges and the average of true precipitation values at rain gauges in each scenario, respectively. RMSEi and RMSEOK denote RMSE for the i-th interpolator and OK, respectively, and Var[·] is the variance of a certain variable.

Three multivariate kriging algorithms were applied using GSLIB [44] and FORTRAN programming. As four different rain gauge density scenarios were applied, the different numbers of rain gauges were used to compute kriging weights by considering the maximum number of each scenario and the correlation ranges of variogram models. As a reference for the spatial distributions obtained by integration, the downscaled TRMM precipitation estimates were first integrated with all 71 rain gauges (i.e., S100). Figure 5 shows histograms of the regression coefficients (intercept and slope) for KED in July. The regression coefficients were locally re-estimated by the KED system, so their values constitute distributions, rather than a single value in SKLM, and thus, the local trends varied across the study area.
Figure 6 presents four prediction results on a 1-km pixel generated by OK using all of the rain gauge data (S100) and three multivariate kriging algorithms for July. When comparing the ATP kriging estimates in Figure 4a with the OK estimates from the rain gauge data, the overall patterns were similar with a large amount of precipitation in the northern part and a small amount of precipitation in the southern and eastern parts. However, overestimated patterns in the downscaled TRMM precipitation estimates were observed in the northeastern and eastern parts, as indicated by the positive rME value in Table 1. Since rME is an overall location-independent measure of bias, locally different patterns may be observed. The relatively large value in the southwestern part of the study area in the OK estimates was not observed in the downscaled TRMM precipitation in Figure 4a. After integrating the rain gauge data, the local pattern, which was not observed in the downscaled TRMM precipitation, could be reproduced in all results by three multivariate kriging algorithms. According to a visual inspection, similar precipitation patterns were presented in all of the prediction results when using all 71 rain gauges, which indicates that the rain gauge data greatly affected the prediction results, and the predictive performance should be assessed under different rain gauge density scenarios.

This work was supported by Basic Research Program through the National Research Foundation of Korea (NRF) funded by the Ministry of Science, ICT & Future Planning (NRF-2015R1A1A1A05000966). The authors thank three anonymous reviewers for providing invaluable comments that greatly improved the presentation of the manuscript. 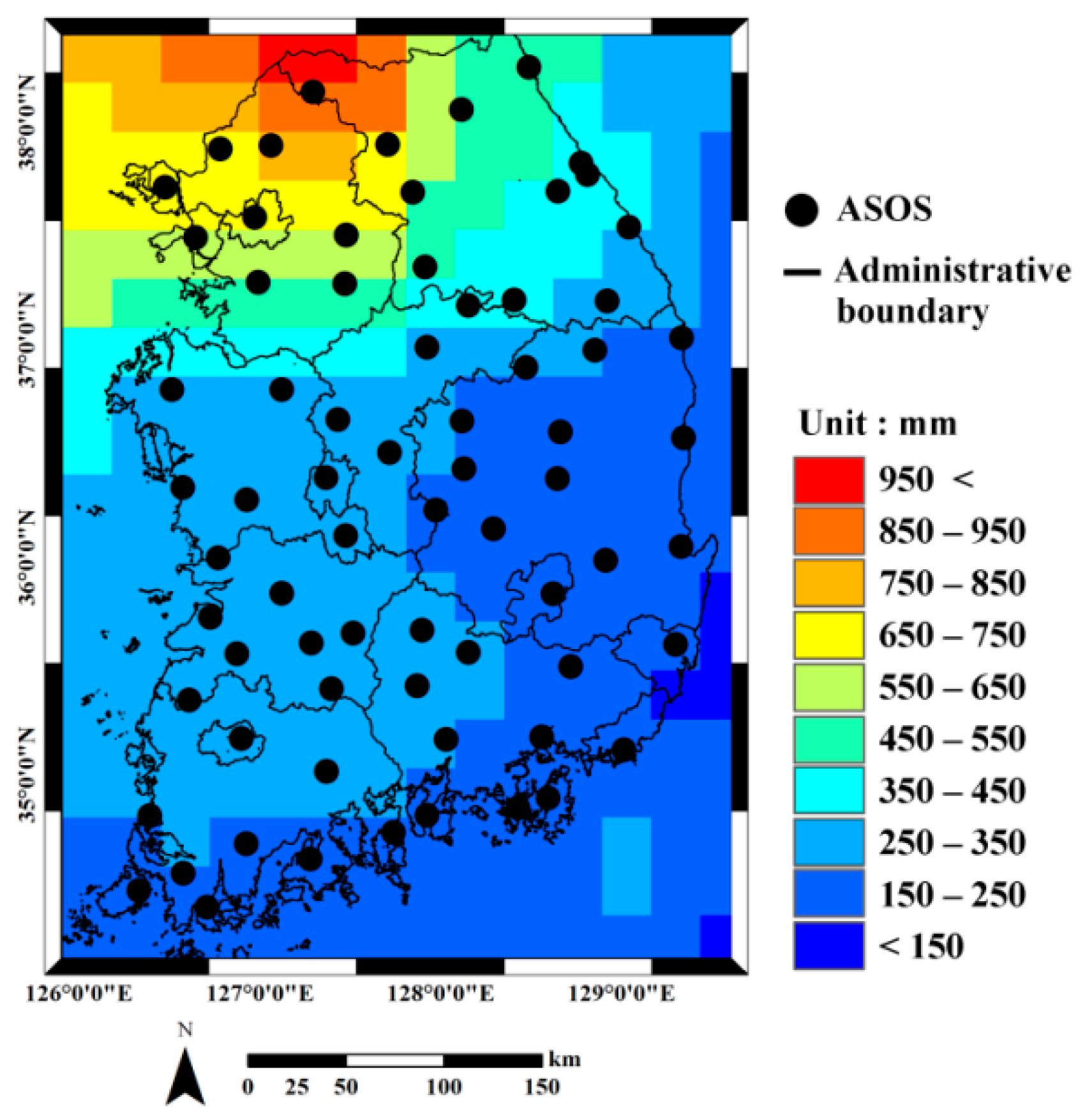 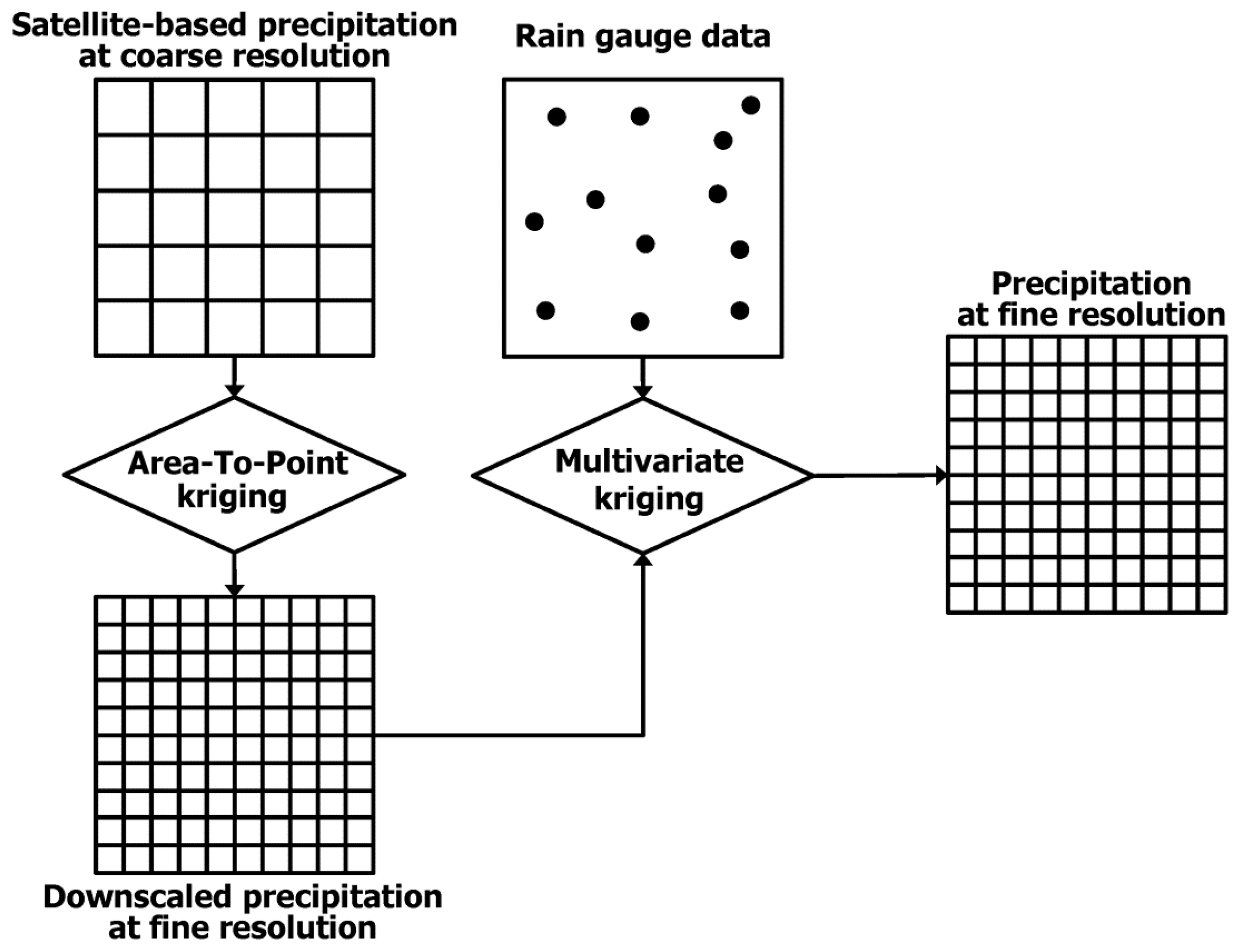 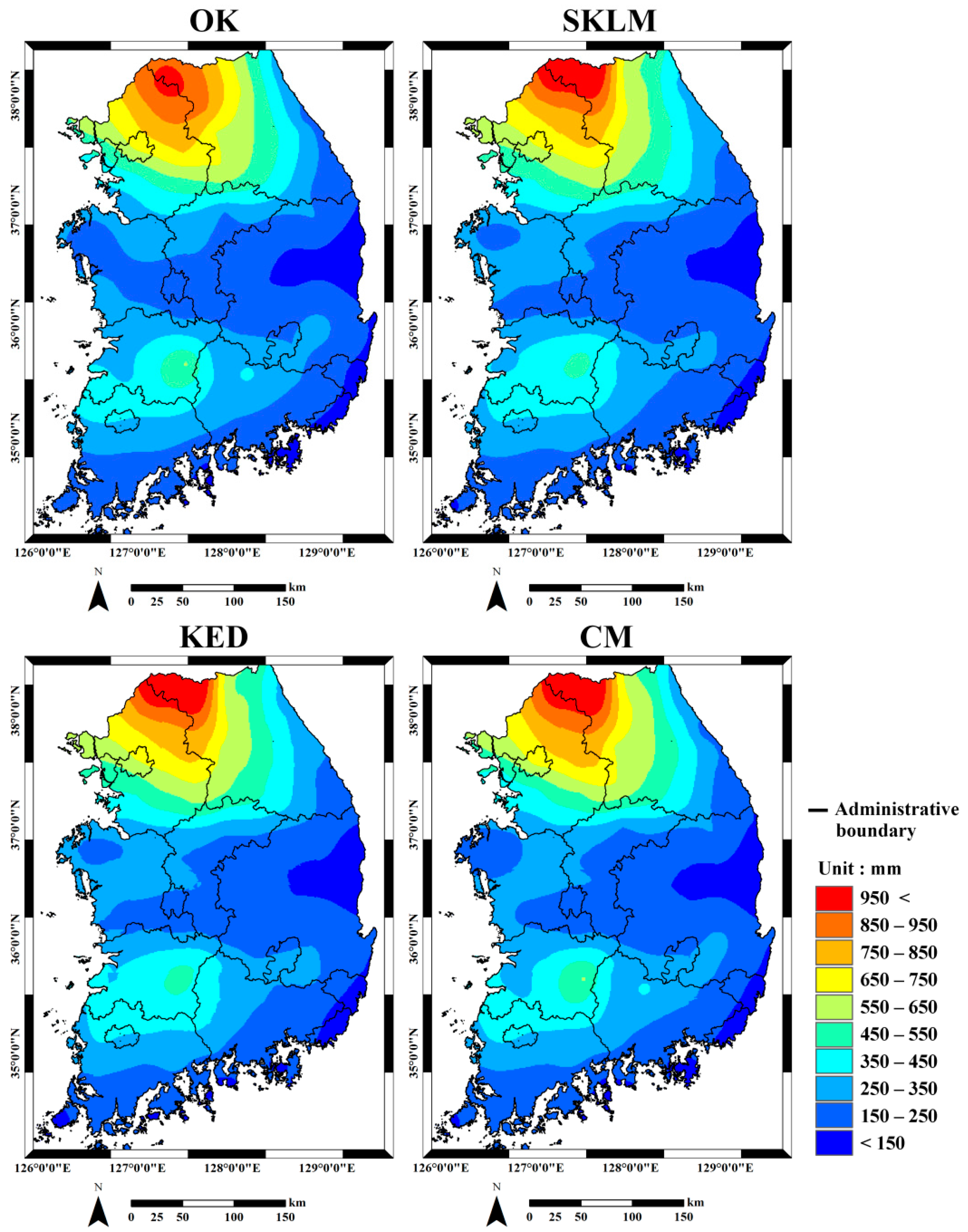 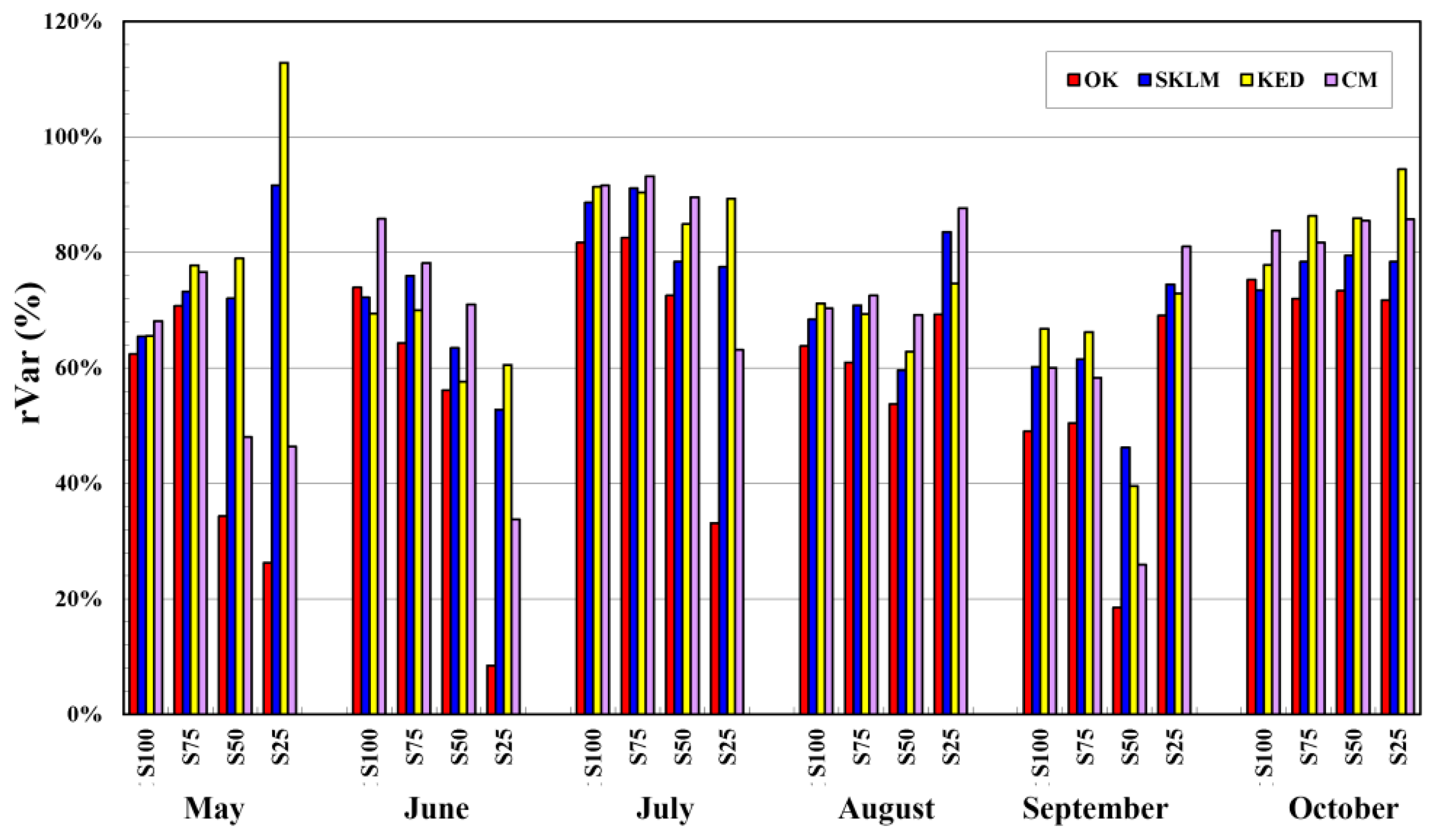