The two co-registered remote sensing images are and , where H and W are the height and width of the image, respectively, that are acquired over the same area at different times and . In Figure 1, the proposed system is composed of three main blocks intended for the following: (1) noise reduction; (2) parameter determination; and (3) improvement of change detection result. To achieve these goals, the corresponding approaches are labeled ①, ②, and ③ in Figure 1. These approaches are described in details in subsequent sections.
The preprocessing of bi-temporal images plays an important role in change detection [40,41,42]. In the proposed system, geometry co-registration and radiometric correction are conducted using Erdas 8.7 software. In addition, image difference, which is one of the most simple and popular methods, is adopted to generate the change magnitude image (CMI) [3,43]. Moreover, the change magnitude of image difference is defined as , where and are the gray pixel values obtained at times and , correspondingly, and i and j are the row and column positions, respectively. A large value of typically indicates that the probability of change at position (i,j) is high. Thus, a bright pixel obtained in image difference normally corresponds to a high probability of change. However, multitemporal images for change detection are typically different in radiation, and the difference is caused by different atmospheric conditions, solar angles, and soil moisture. Therefore, obtaining a reliable change magnitude image is necessary.

2.1. Automatic Noise Reduction Based on GF

As mentioned previously, CMI is usually corrupted by noise and resulted in an unreliable CMI. In this section, it considers that GF is frequently used to reduce the noise in the original image or intermediate results, as discussed in previous studies [44,45,46]. However, the common drawback of using GF is the requirement for “prior” knowledge about the amount of noise corruption, although Gaussian-like noise distribution is frequently encountered in acquired data [47]. This knowledge is valuable for the optimal choice of parameter. However, this information is frequently unavailable in practical applications. Therefore, an automatic noise reduction approach should be developed. In this section, an automatic noise reduction approach based on GF and OTSU [48,49] is proposed to further refine the noise in CMI. The flowchart of this proposed approach is illustrated in Figure 2, and its principle is explained as follows.
In the proposed automatic noise reduction method, the parameter, which is the filter radius () of GF, is tuned by a gradual procedure that considers the relationship between the filtered image and its corresponding OTSU-binary result. In the proposed approach, is increased from small to large gradually, and each corresponding filtered image is automatically divided into a binary image through OTSU. The corresponding can be considered the optimized filtered radius when the previous predicted binary threshold () is equal to the current threshold () because OTSU predicts an optimal threshold by maximizing the two-class variance [49]. The two classes are changed (foreground) and unchanged (background) pixels, especially for change detection. If the filtered result with an increasing will not vary with the binary threshold obtained by OTSU when combining GF and OTSU comprehensively, then the current () can smoothen the noise optimally and provide a stable performance of changed and unchanged pixels for an input CMI.
Based on the above principles, the details of the proposed technique are presented in Figure 2, as follows: (1) the GF is adopted to smoothen the CMI with an initial filtering radius ; the filtered image is ; (2) OTSU is adopted to predict a binary threshold () based on the ; (3) an iteration is presented, is updated by the value of , and the updated filtering radius is used to filter the image difference (); (4) in the next iteration, new threshold ) is obtained by OTSU based on GF with updated filtered radius; and (5) this iteration is terminated when the two predicted thresholds are equal, the optimal filtered radius of GF is determined, and the optimal filtered image () is generated.

Obtaining the change region through binary threshold based on filtered change magnitude image (FCMI) remains difficult, although the first proposed technique can reduce much noise in CMI. Furthermore, several previous studies demonstrate that determining a threshold for dividing the CMI into a BCDM is time-consuming and experience-dependent [23,50,51,52,53]. Therefore, the threshold range should be predicted automatically, especially for inexperienced practitioners. The flowchart of the second proposed technique is illustrated in Figure 3.
In Figure 3, several key points are worth noting: First, curve fitting based on the histogram is conducted on the filtered image; in this study, moving least squares (MLS) is adopted as the curve fitting method [54]. MLS is used as a ten-order polynomial function to fit points and describe the trends of pixel distribution in the proposed TRP. Second, if f(x) is assumed as the curve fitting function, then S(x) is defined as the slope value function; the value of S(x) can be calculated by the first derivative of f(x). Finally, a window sliding technique is used to detect the top and bottom points at the curve of S(x); further details on this technique can be tracked in [55].
Specifically, the schematic of the proposed TRP presented in Figure 4 indicates that the pixels in FCMI are observed as “changed pixels–uncertain pixels–unchanged pixels”. The noise error induced by misregistration distributes along the edge between the changed and unchanged areas [56,57,58,59]; the “uncertain pixels” distribute between the changed and unchanged areas. However, the difference between the three kinds of pixels is fuzzy and uncertain in a practical application. The distribution trend of pixels should be depicted to obtain the threshold range. Therefore, firstly, the distribution of pixels in FCMI is depicted using a histogram technique, such as in [14]. Then, a simple and classical curve fitting technique, namely, MLS method, is adopted to smoothen the noise and depict the distributed trends accurately [54]. Finally, the slope value of the curve fitting line is calculated by using a derivative, and the bottom and top values related to the threshold range can be captured.
Two examples using the FCMI of Mexico and Sardinia Island (Italy) datasets to illustrate the performance of the proposed TRP are depicted in Figure 5. The yellow pixels in Figure 5 are within the predicted range obtained by the proposed technique. The yellow pixels are distributed around the bright pixels, which indicate a high possibility of change.
As discussed in previous studies, threshold determination is performed by using empirical strategies or manual trial-and-error procedures, which are time-consuming and affect the accuracy and reliability of change detection [60,61,62]. Therefore, the threshold range should be predicted for determining a rational threshold. Compared with several existing threshold decision processes for change detection [14,26,27,63], the novelty of the proposed TRP is that it can automatically determine the threshold range for selecting a binary threshold. Moreover, the process of the proposed TRP is driven by the data itself and is independent of any assumption or prior knowledge.

Opportunities for improving the detection accuracy and performance still exist, although threshold range assistance is valuable for selecting a rational threshold for dividing the FCMI into a BCDM in terms of convenience. Therefore, a modified RGA is proposed in this section as the third technique in the proposed framework to improve the performance of change detection. The flowchart of the RGA is presented in Figure 6.
In BCDM, the spatial change pixels continuously construct a changing area, namely, “initial growing region (IGR)”, in the proposed system. First, a single changed or unchanged pixel in the BCDM is observed as a noise pixel that can be removed automatically. To improve the performance of the BCDM further, the FCMI and BCDM are overlaid together, and the pixels for the FCMI within an IGR are used to build a corresponding credible interval (CI): , where and are the mean value and standard deviation of region r, respectively. The pixels on the boundary of r are seed pixels, as the green pixels displayed in Figure 7b. Similar gray presents the adjacent change probability or ground material in Figure 7. If the value of a seed pixel is within the CI, then the pixel will be marked as “changed”, and this iteration will be terminated until no pixel can be found and can meet this condition. An example of the proposed RGA is demonstrated in Figure 7 to clarify this growing procedure.

The first dataset: The two images used in our experiments are acquired by using Zeiss RMK TOP 15 Aerial Survey Camera System at a flying height of approximately 2400 m in April 2007 and July 2014. The two RGB 24-bit images describe a landslide event in Hong Kong, as depicted in Figure 8. The image is pixels with a 0.5 m spatial resolution. The ground truth reference map was interpreted manually and is displayed in Figure 8d to compare the proposed system with other methods quantitatively.
The second dataset: This dataset was captured similar to the first dataset, which also has a spatial resolution of 0.5 m per pixel. The size of the study area is pixels. The pre- and post-event images are presented in Figure 9a,b. The ground truth is also interpreted manually and illustrated in Figure 9d. This area is covered by many kinds of grass and a spot of shrubs and trees. The spectral heterogeneity of these bi-temporal images is relatively high.
The third dataset: This dataset is open data for change detection evaluation. It is composed of two 8-bit images acquired by Landsat thematic mapper sensor of the Landsat-7 satellite in Mexico area in April 2000 and May 2002. From the entire scene, a section of pixels was selected as the test site. Figure 10a,b depicts the channel 4 images in 2000 and 2002, respectively. Comparing the two images, fire destroyed a large portion of vegetation in the considered changed region. The reference change map was obtained manually to obtain a quantitative evaluation, as presented in Figure 10d.
The fourth dataset: This dataset is composed of two 8-bit images acquired by the Landsat TM sensor of the Landsat-5 satellite on September 1995 and July 1996. The size of the testing site is . pixels, which covers Lake Mulargia on Sardinia Island (Italy). The water level in the lake varied obviously between the two aforementioned acquisition dates. Figure 11a,b depicts the band 4 images in 1995 and 1996, correspondingly. In addition, the reference map is defined manually according to the detailed visual analysis based on bi-temporal image comparison.

The authors thank the Editor-in-Chief, associate editor, and reviewers for their insightful comments and suggestions. The authors thank LiChen Yang for his program in the experiments. This work was supported by the project Dynamic Characterization of Smart City (1-ZE24), the National Science Foundation China (61701396), the Key Laboratory for National Geographic Census and Monitoring, National Administration of Surveying, Mapping, and Geoinformation (2015NGCM), key Laboratory of Spatial Data Mining & Information Sharing of Ministry of Education, Fuzhou University (2018LSDMIS01), and the project from the China Postdoctoral Science Foundation (2015M572658XB). 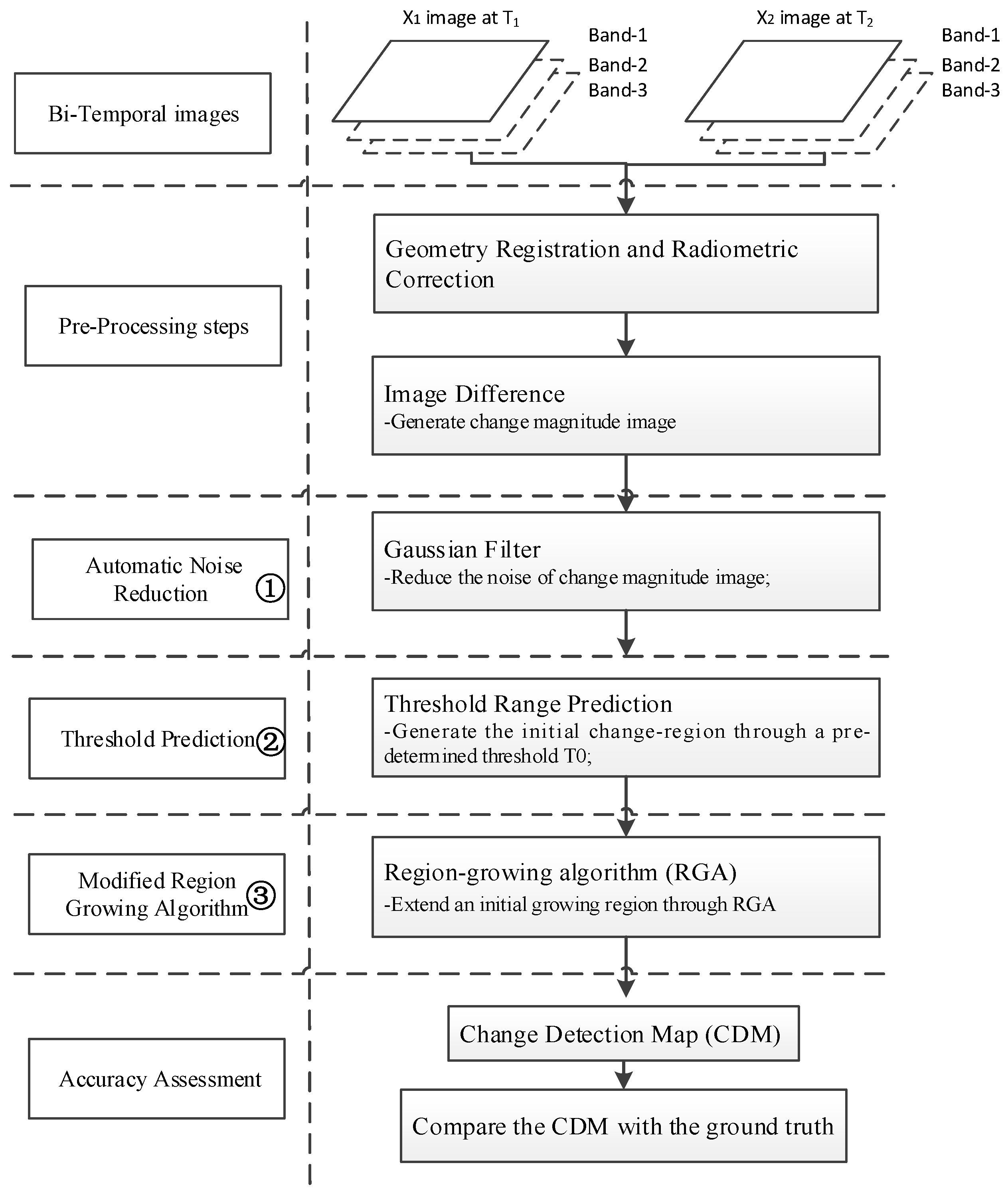 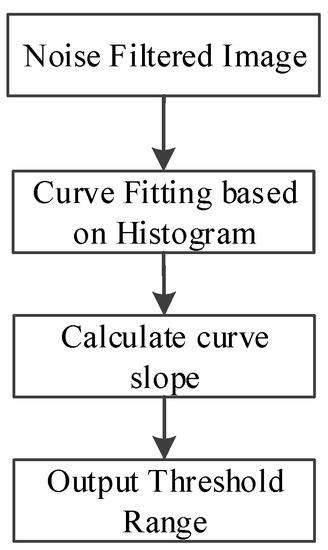 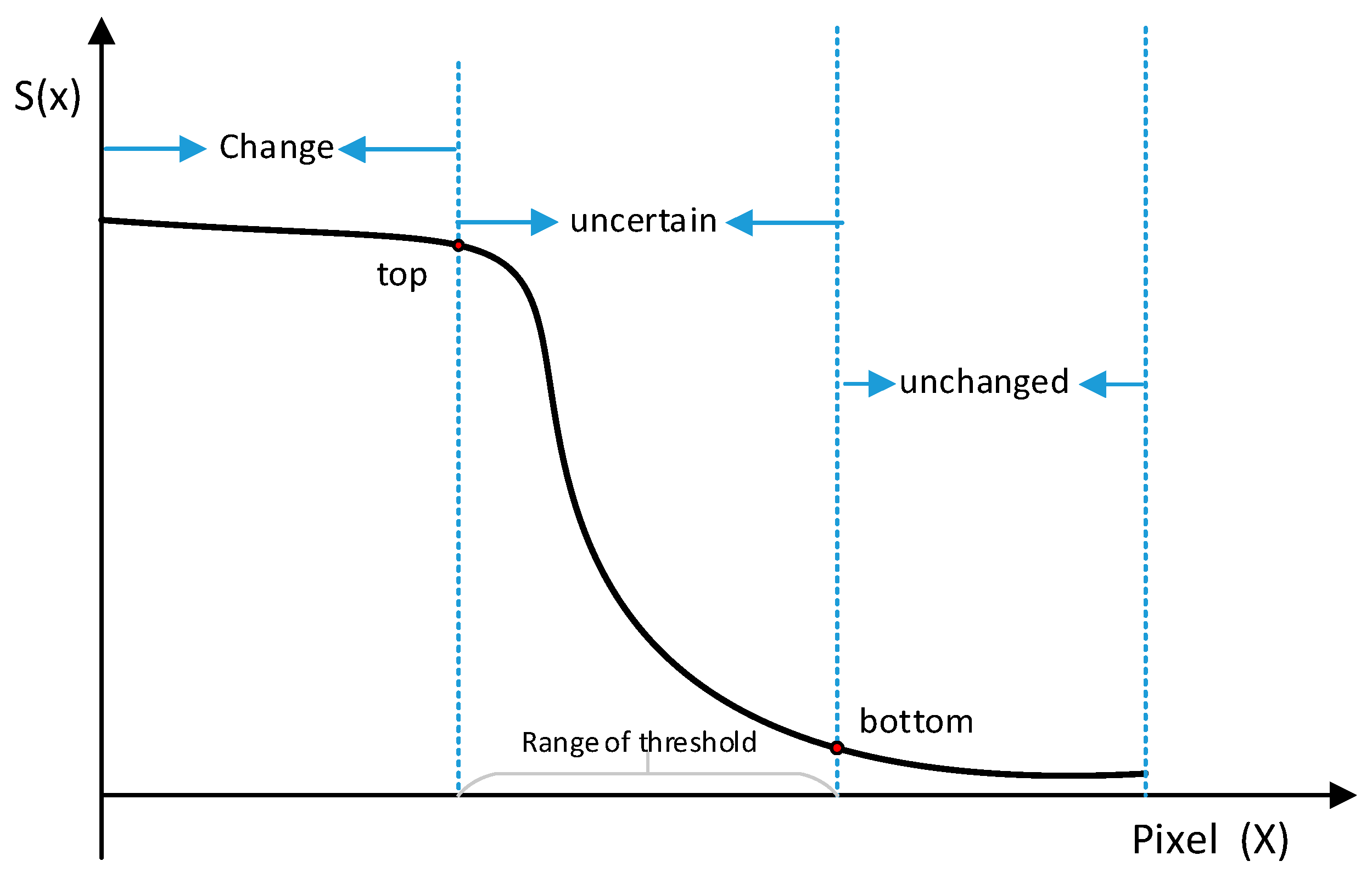 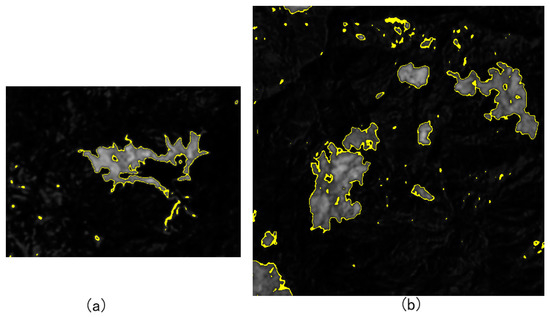 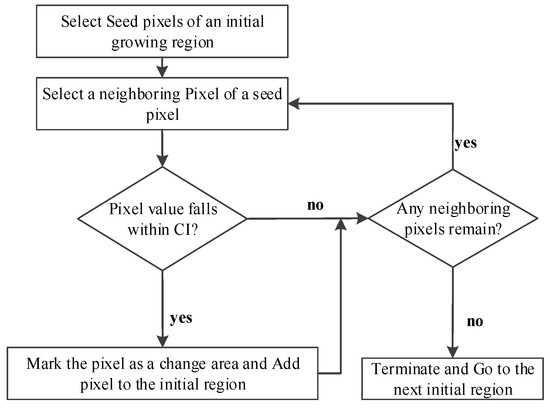 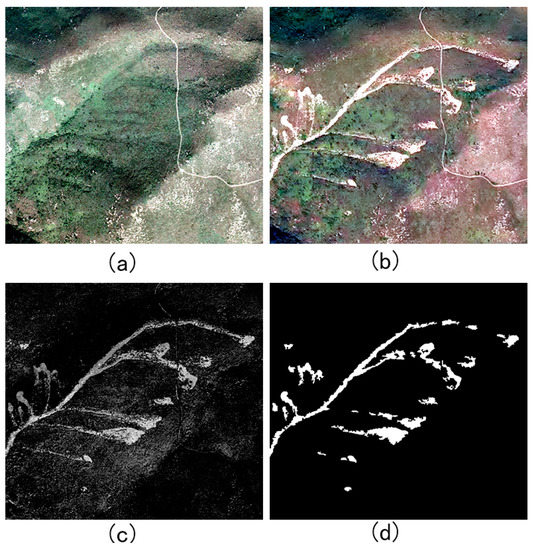 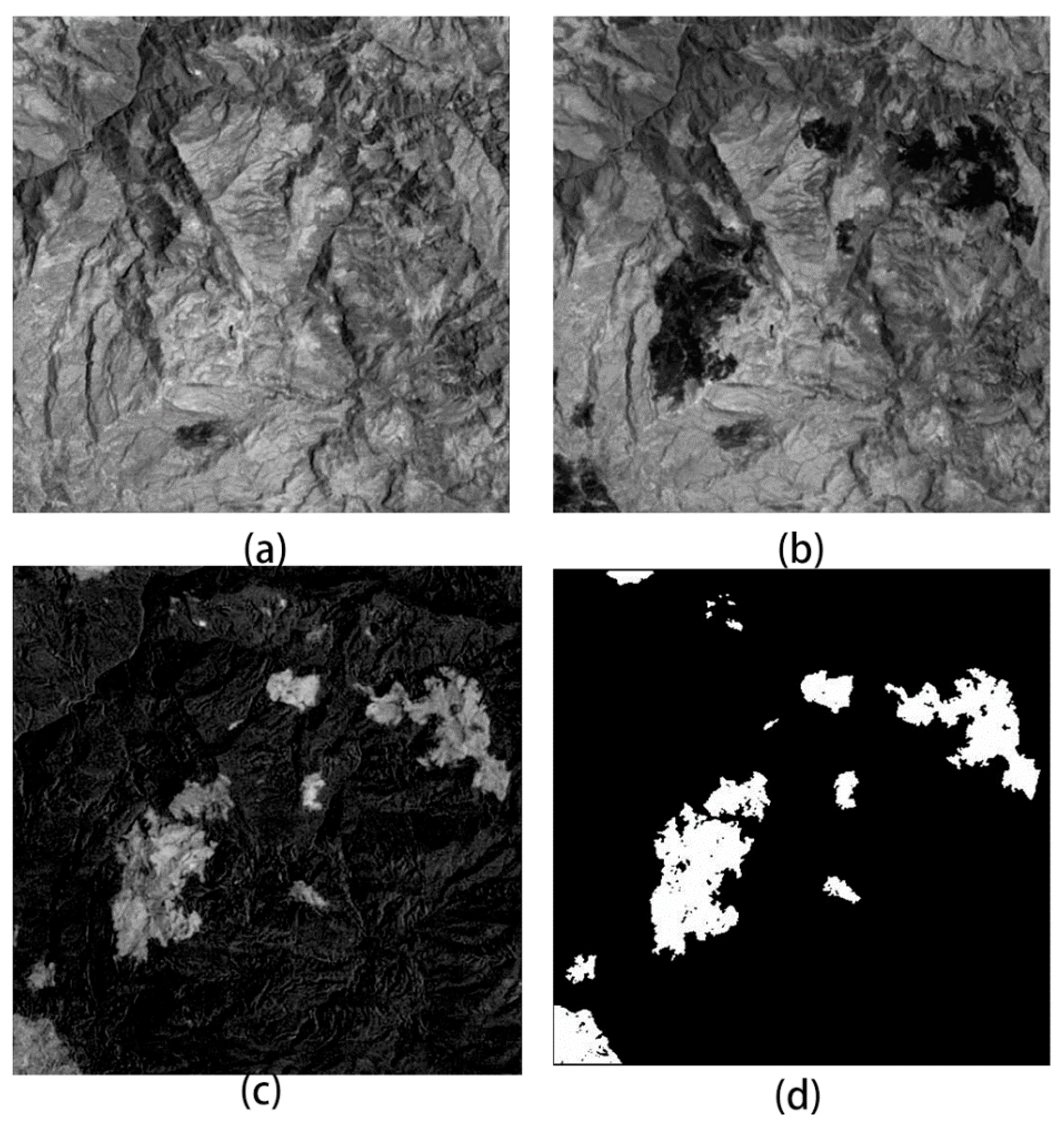 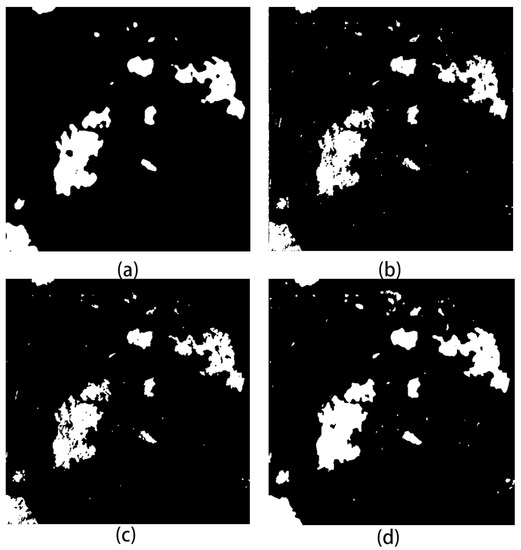 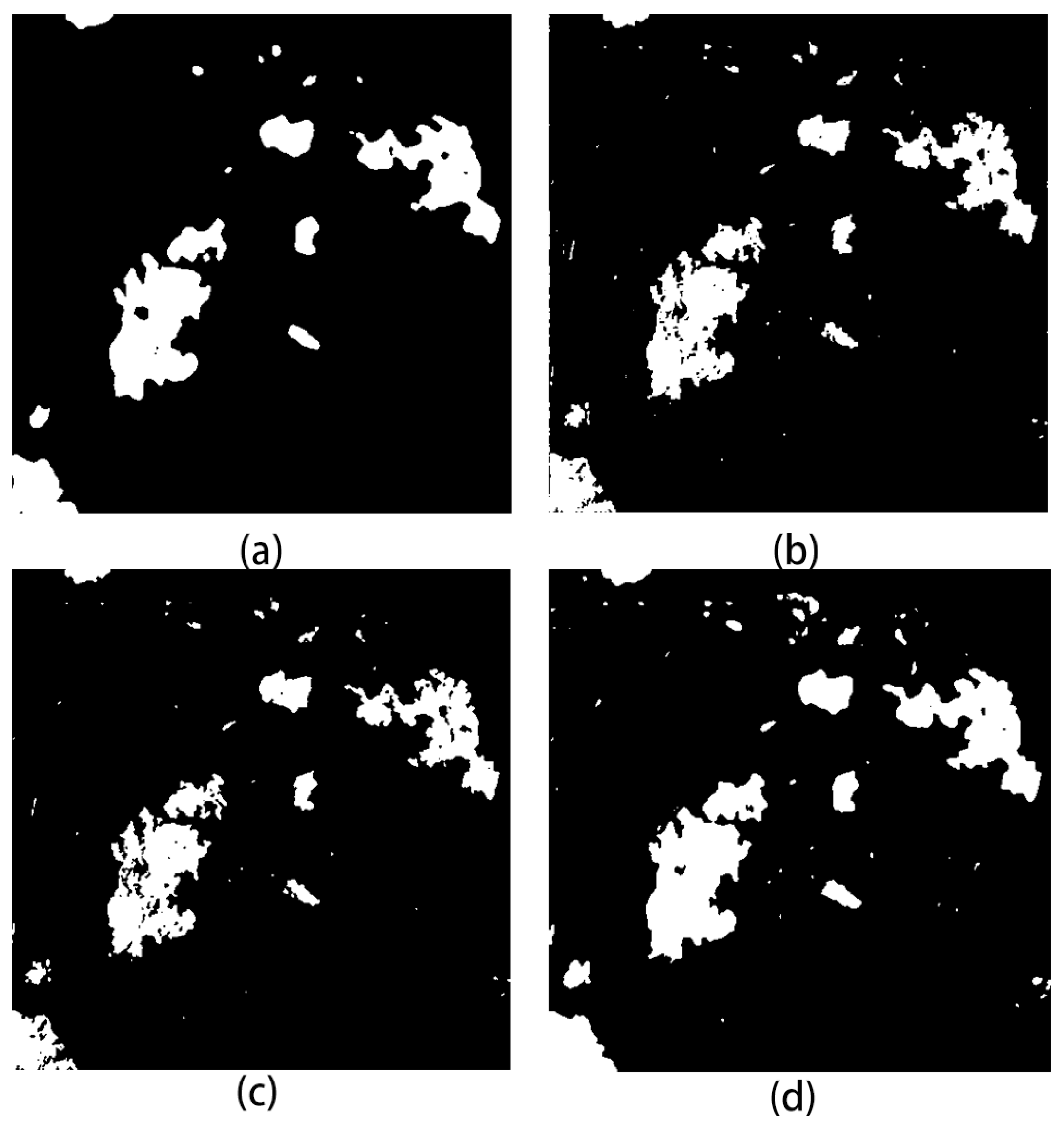 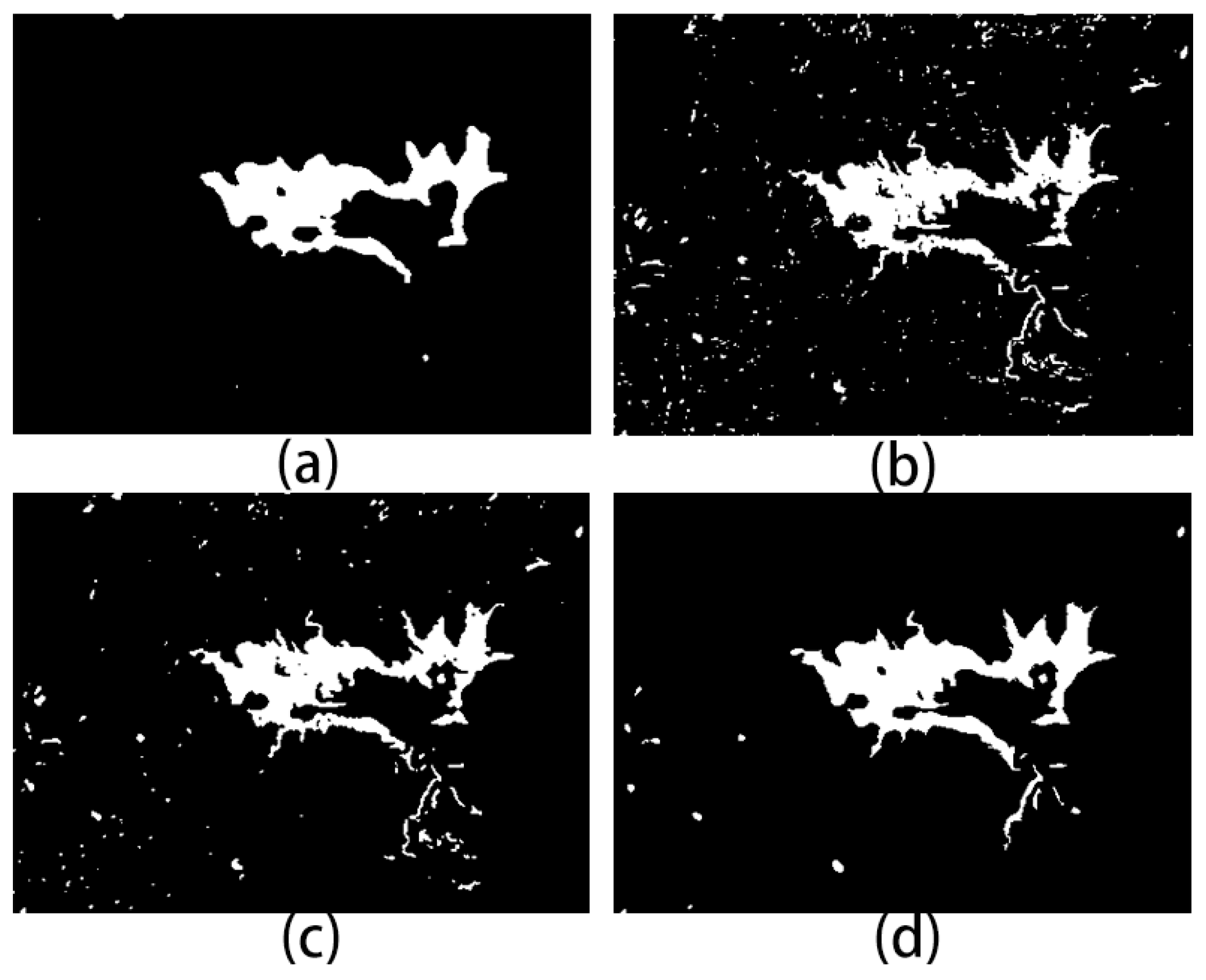 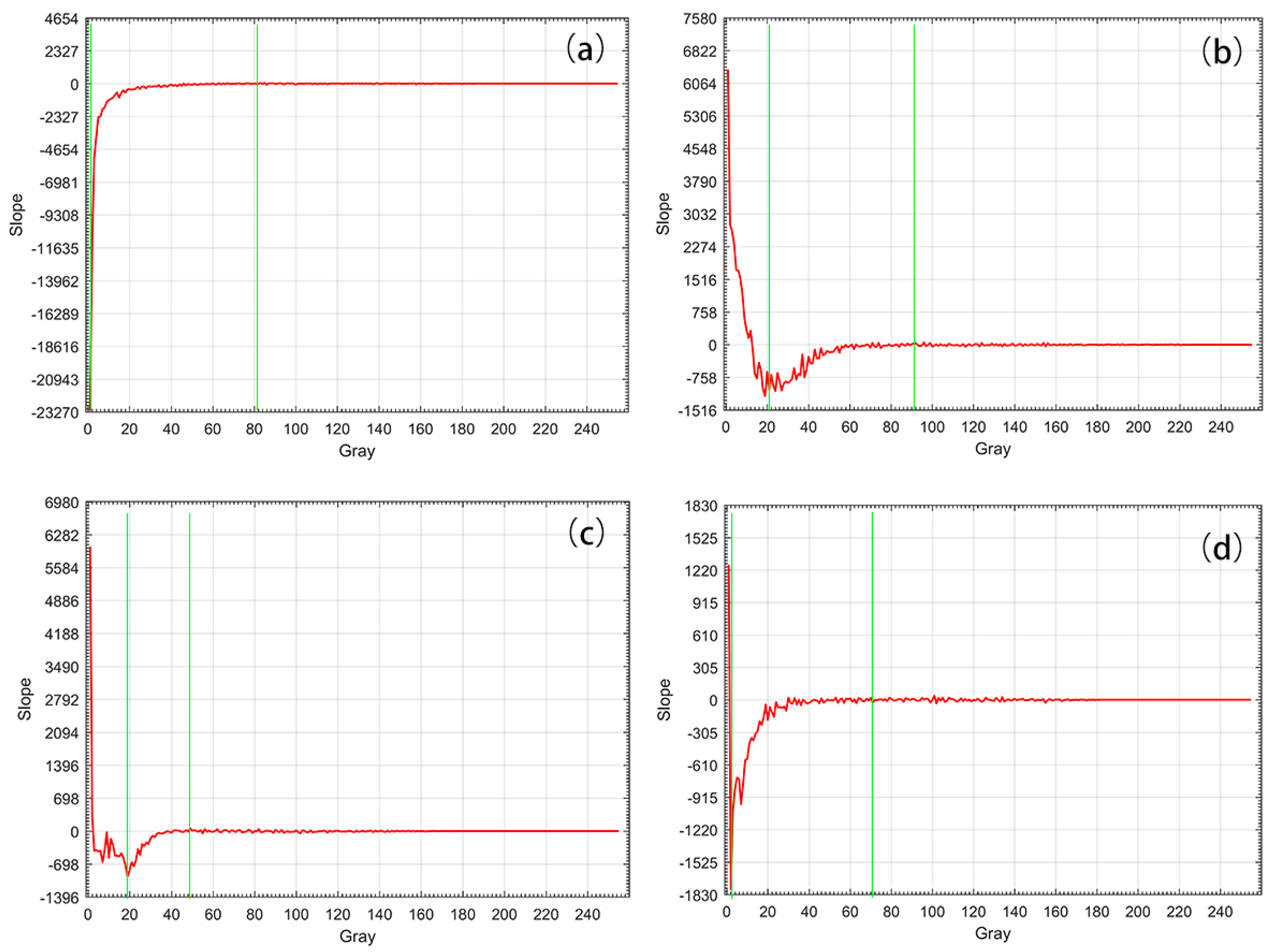 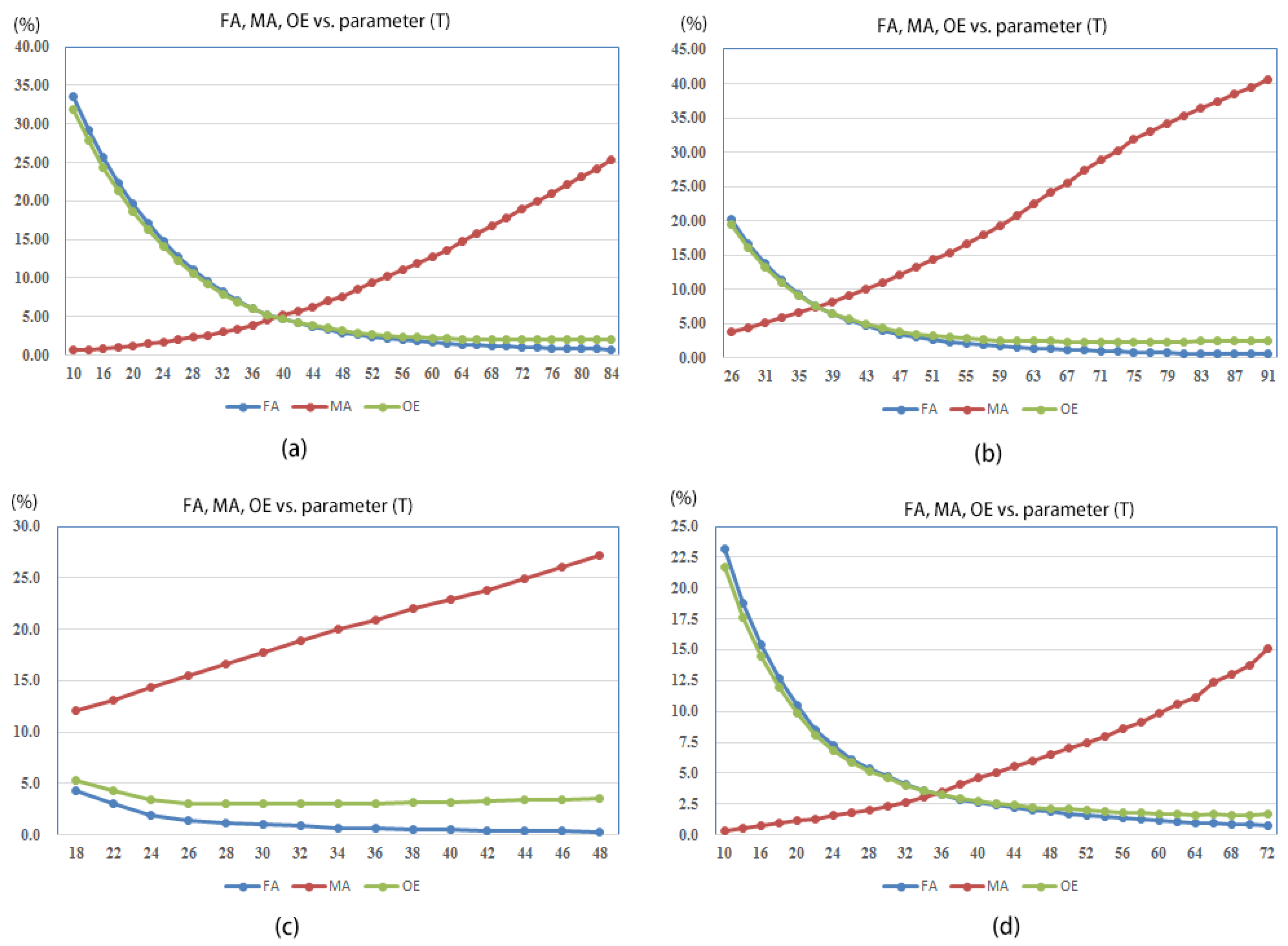 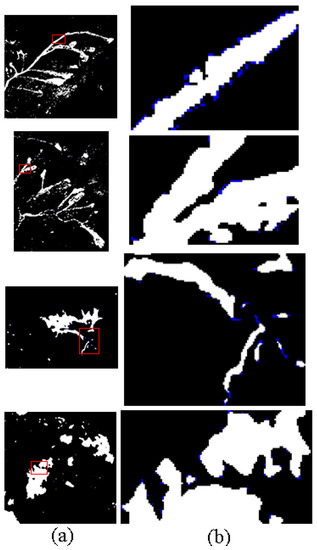 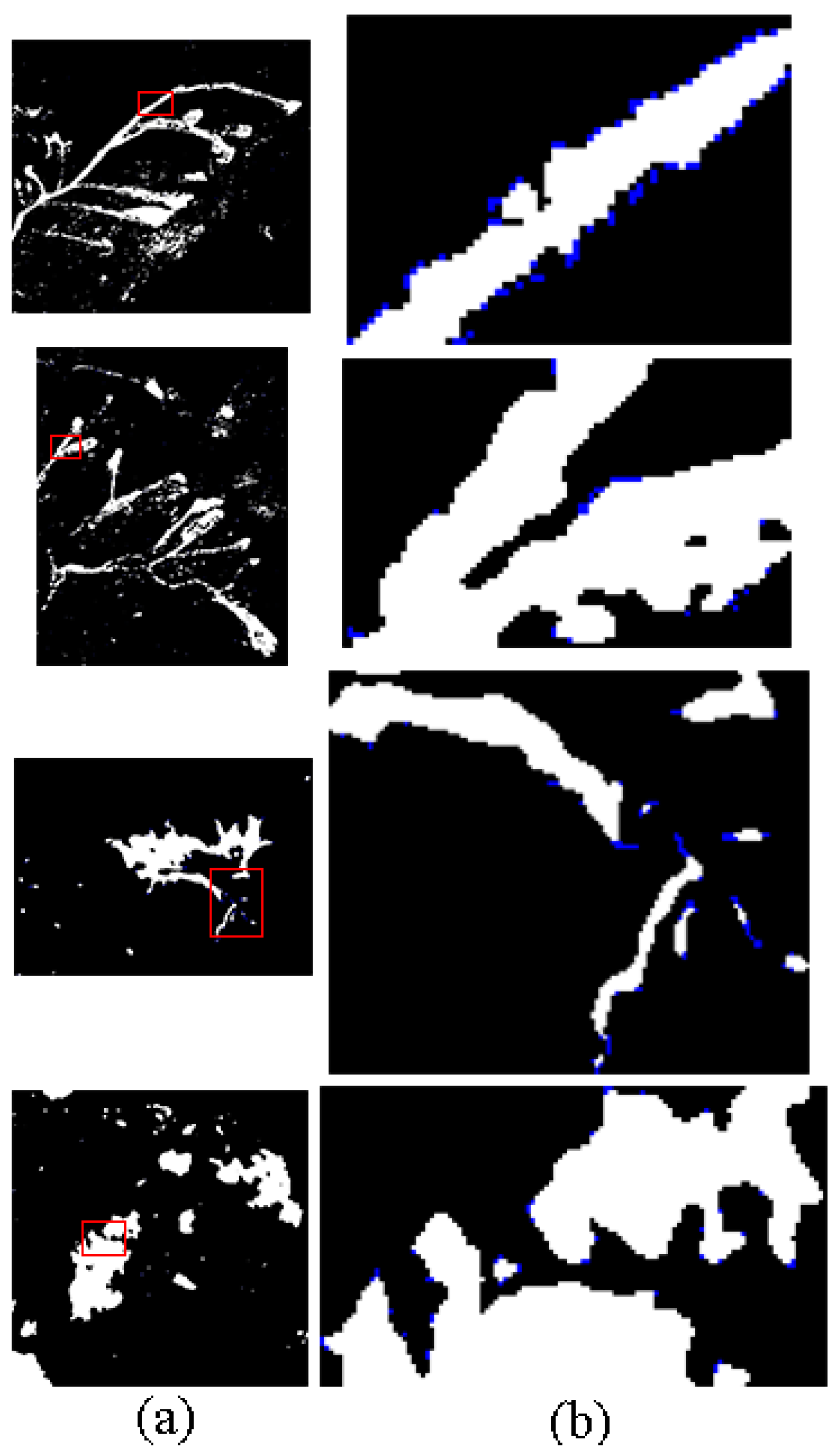