Anthropogenic heat and modified landscapes raise air and surface temperatures in urbanized areas around the globe. This phenomenon is widely known as an urban heat island (UHI). Previous UHI studies, and specifically those based on remote sensing data, have not included cities north of 60°N. A few in situ studies have indicated that even relatively small cities in high latitudes may exhibit significantly amplified UHIs. The UHI characteristics and factors controlling its intensity in high latitudes remain largely unknown. This study attempts to close this knowledge gap for 28 cities in northern West Siberia (NWS). NWS cities are convenient for urban intercomparison studies as they have relatively similar cold continental climates, and flat, rather homogeneous landscapes. We investigated the UHI in NWS cities using the moderate-resolution imaging spectroradiometer (MODIS) MOD 11A2 land surface temperature (LST) product in 8-day composites. The analysis reveals that all 28 NWS cities exhibit a persistent UHI in summer and winter. The LST analysis found differences in summer and winter regarding the UHI effect, and supports the hypothesis of seasonal differences in the causes of UHI formation. Correlation analysis found the strongest relationships between the UHI and population (log P). Regression models using log P alone could explain 65–67% of the variability of UHIs in the region. Additional explanatory power—at least in summer—is provided by the surrounding background temperatures, which themselves are strongly correlated with latitude. The performed regression analysis thus confirms the important role of the surrounding temperature in explaining spatial–temporal variation of UHI intensity. These findings suggest a climatological basis for these phenomena and, given the importance of climatic warming, an aspect that deserves future study. View Full-Text
Keywords: urban heat island; land surface temperature; land cover; remote sensing; MODIS; Siberia; Arctic urban heat island; land surface temperature; land cover; remote sensing; MODIS; Siberia; Arctic
►▼ Show Figures 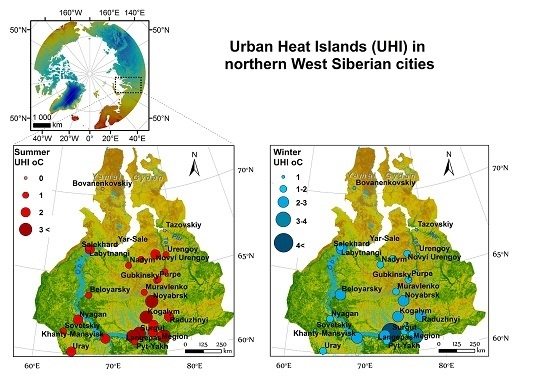