Ground PM2.5 data were acquired from the website PM25.in. This website collects official PM2.5 concentration data as well as data on other airborne pollutants, all provided by the China National Environmental Monitoring Center (CNEMC), and publishes hourly air quality information for all monitoring cities. Since 1 January 2015, the number of monitoring cities has increased to 367 and the total number of observation stations has been increased to 1450. By calling specific API provided by PM25.in, we collected hourly PM2.5 data for all observation stations within the Heilongjiang province during the period of 30 October to 6 November 2015. The distribution of 55 ground PM2.5 observation stations within Heilongjiang province is demonstrated in Figure 2.

Similar to previous studies [7,8,9], this research employed MODIS Thermal Anomalies/Fire products (MOD14A1) for extracting crop residue burning spots. MODIS Thermal Anomalies/Fire products are mainly produced based on MODIS bands at 4 and 11 mm radiances [17]. The fire detection strategy is based on absolute detection of a fire (when the fire strength is sufficient to detect) and on relative detection of a fire according to the difference between its Digital Number (DN) and the DN from the background, which considers the variability of the surface temperature and reflection by sunlight. Several experiments have been conducted to reject typical false alarm sources, such as sun glint or an unmasked coastline [18]. MOD14A1 data with a spatial resolution of 1 km are produced every 8 days as a level-3 raster product in the Sinusoidal projection. This product is of three dimensions: fire-mask (1D) and a maximum fire-radioactive-power (2D) are provided for each day (3D) in the 8-day period. The fire-mask contains an eight band-sequential (day), representing eight consecutive days of data collection. By separating the eight fire-masks, we can extract daily Thermal Anomalies/Fire images. For Heilongjiang province (43°26′–53°33′N, 121°11′–135°05′E), four tiles of MOD14A1 data, h25v03, h26v03, h26v04, and h27v04, were downloaded to cover the entire study area. We extracted daily fire maps from 31 October to 6 November 2015. The MOD14A1 data were downloaded from NASA’s LAADS Data Center [19].

Although daily fire maps effectively reflect the distribution of fire spots across the study areas, these fire spots are not necessarily crop residue burning spots. The burning of urban rubbish and wild fires that occur in the forests may also be detected in the daily fire maps. As a result, land cover data that categorizes the cropland can be employed to assist the extraction of crop burning spots from fire maps. In this case, we obtained a 2015 land cover product with 30 m resolution from Resources and Environmental Science Data Center, Chinese Academy of Science (http://www.resdc.cn/). This dataset is the latest, high-resolution national land cover data set and has been widely used in a diversity of studies. There are six major land cover types: cropland, forest, grassland, water, urban, industrial and residential areas, and unused land. By identifying fires that occurred in the cropland areas, we can extract reliable crop residue burning spots for the following analysis.

4.2. The Influence of Crop Residue Burning on Local PM2.5 Concentrations

4.2.2. The Influence of Crop Residue Burning on Local PM2.5 Concentrations

Although the MODIS Thermal Anomalies/Fire products have been widely employed to detect fires, crop residue burning spots may still be influenced by other scattered false fires or fires from other burning activities. Currently, most studies directly employed existing remote sensing products, such as MOD14A1 data and the fourth generation of the Global Fire Emissions Database (GFED4), for extracting crop residue burning spots. Meanwhile, few field experiments were conducted to valid the suitability of these international remote sensing data sources in detecting burning activities of crop residue in China, which may lead to potential biases. For instance, the DN values of MOD14A1 data ranging from 7–9, suggest the possibility of a fire spot. The MOD14A1 data instructions suggest that 7 stands for fire with low confidence, 8 for fire with nominal confidence, and 9 for fire with high confidence. In practice, the number of extracted fire spots using DN 7–9, 8–9, and 9 for Heilongjiang province during 31 October to 6 November 2015 was 5160, 4589, and 504. As one can see, the selection of different parameters leads to completely different extraction results, and there is no feasible solution to decide what parameter is more suitable for fire detection, especially the detection of crop residue burning in China. As a result, in future research, more field experiments should be conducted to examine the reliability and suitability of different fire products for crop residue burning.

5.2. Source Apportionment Methods Should Be Employed to Quantify the Relative Contribution of Crop Residue Burning to Local PM2.5 Concentrations 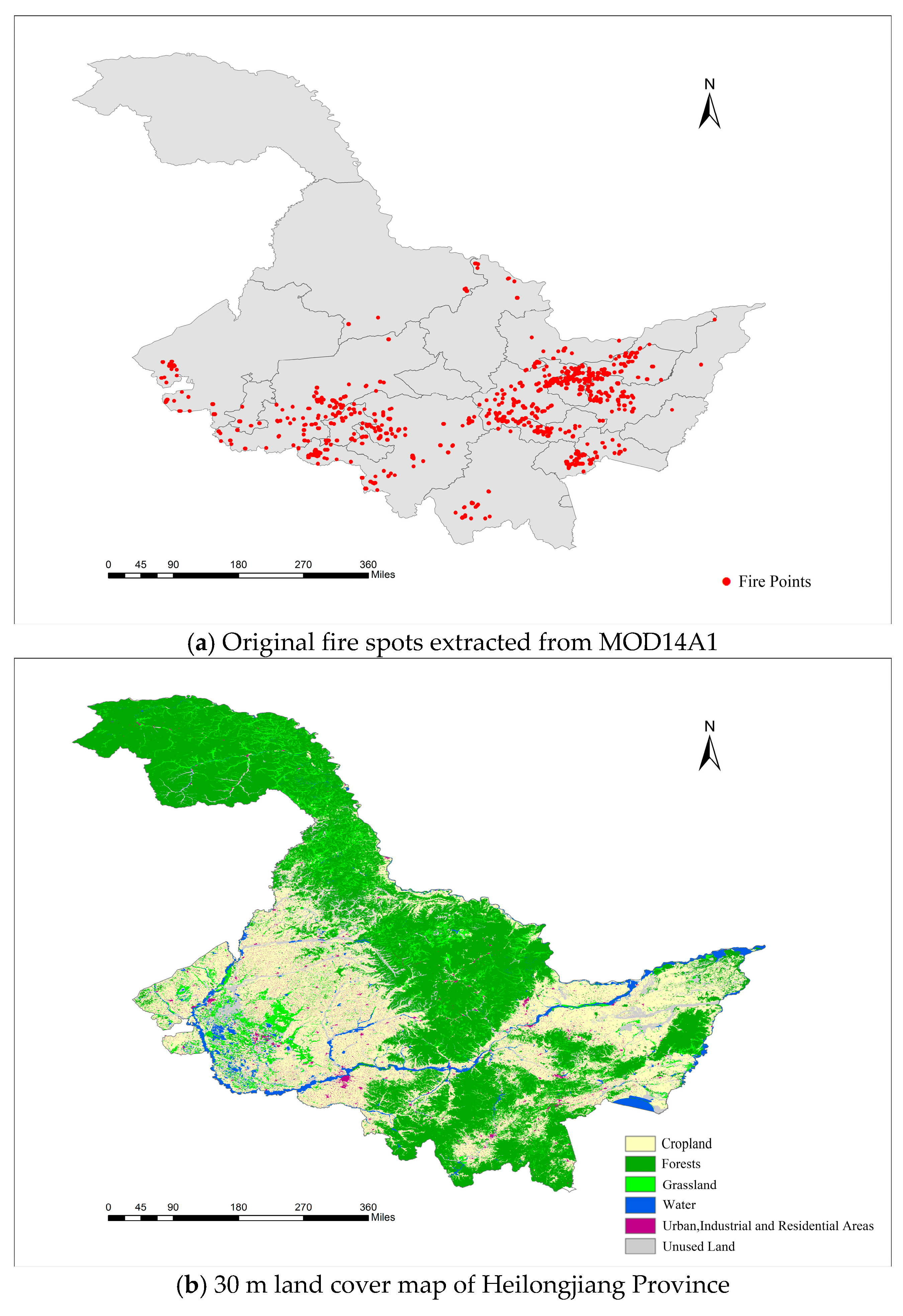 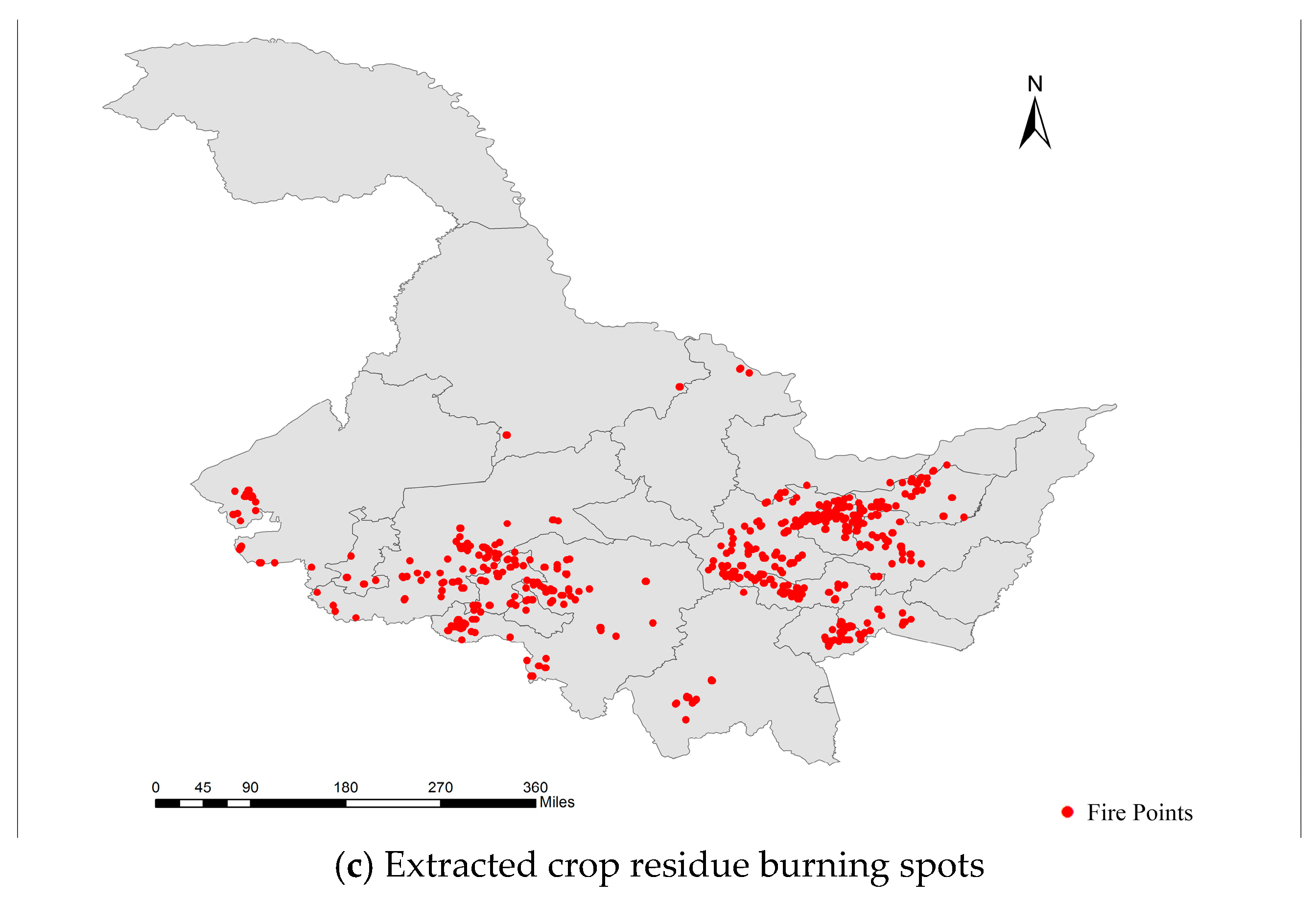 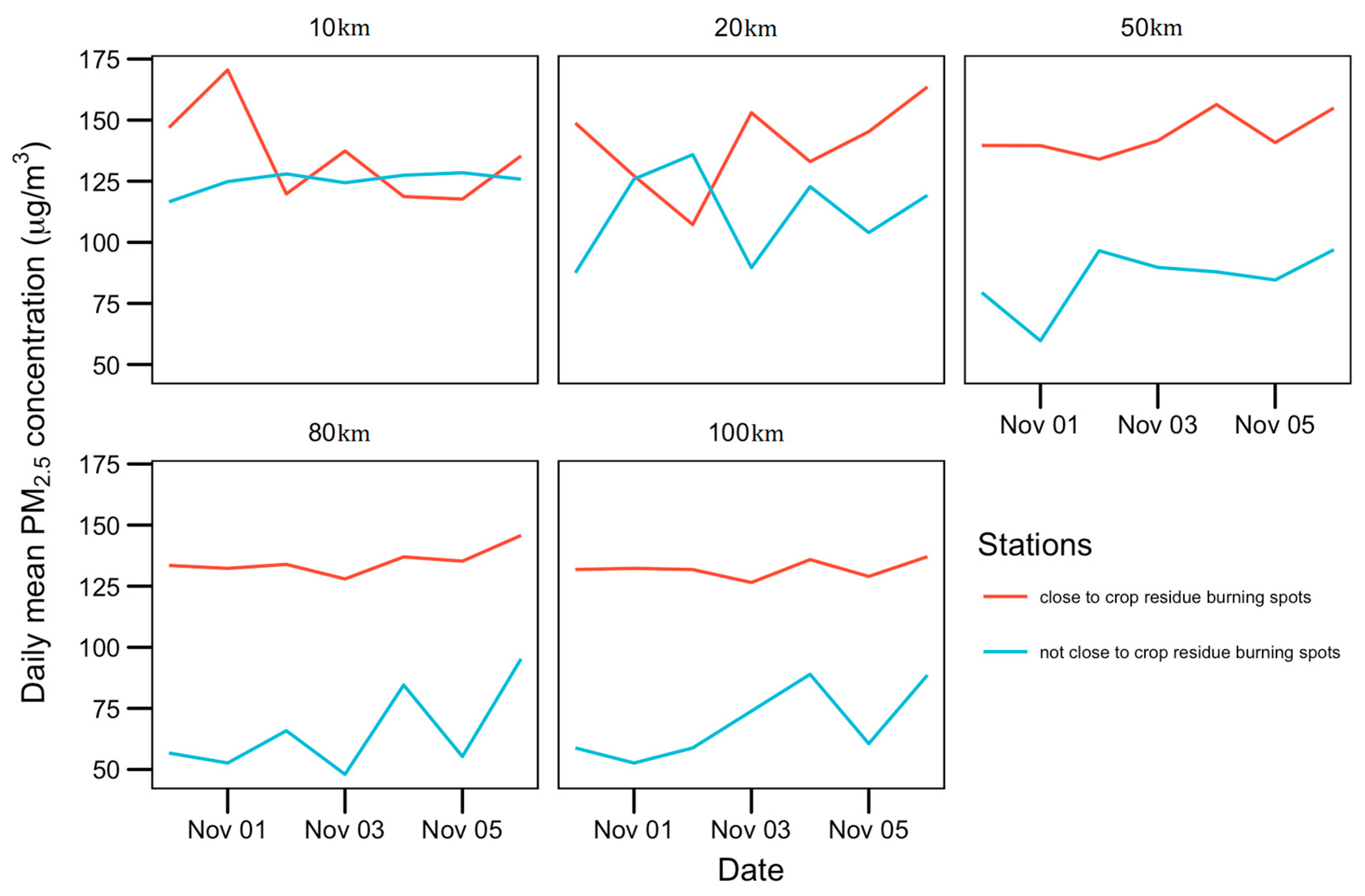 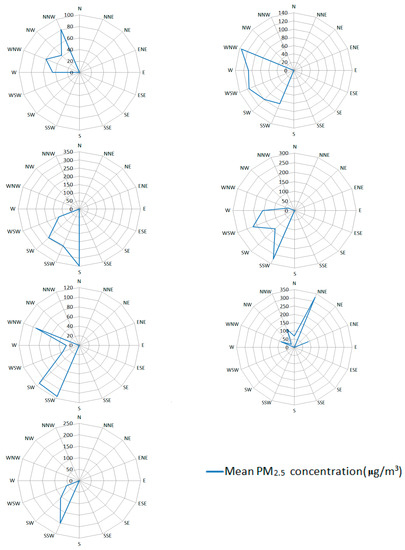