Post-classification comparison is one of the most widely used change detection methods. However, it presents several operational problems that are often ignored, such as the occurrence of impossible transitions, difficulties in accuracy assessment and results not accurate enough for the purpose. This work aims to evaluate post-classification comparison change detection results obtained from LANDSAT5/TM data in a region of the Brazilian Amazon, using three legends in different levels of detail and both pixel wise and region based classifiers. A distinctive characteristic of the used approach is that each change mapping is the result of the combination of 100 land cover classifications for each date, obtained using varied training samples. This approach allowed to account for the training samples choice into the methodology, as well as the construction of confidence mappings. We presented and discussed different approaches for evaluating change results, such as the likelihood of land cover transitions occurring within the study area and time gap, the use of rectangular matrices to incorporate the occurrence of impossible or non evaluable changes and classification uncertainty. In general, change mappings obtained from region based classifications showed better results than the ones obtained from pixel based classifications. Globally, the use of region based approaches, in contrast to pixel based ones, led to an increase in accuracy of 15.5% for the change mapping from the most detailed legend, 7.8% for the one with the legend with intermediate level of detail and 3.6% for the less detailed one. In addition, individual transitions between land cover classes were better identified using region based approaches, with the exception of transitions from a non agriculture class to an agricultural one. The proposed quality mappings are useful to help to evaluate the change mappings, mainly in legend levels with higher level of detail and if reference samples are unreliable or unavailable. It was possible to access, in a spatially explicit way, that at least 29.0% of the pixel based change mapping and 21.9% of the region based one from the most detailed legend were erroneous classified, without ground truth information on the evaluated date. These values decreased to 0.5% and 1.4% (respectively the pixel and region based approaches) for results with the legend with the intermediate level of detail and are non existent in the results from the less detailed legend. The more generalized the legend (lower number of classes), the most similar are the accuracy of region and pixel based change mappings. These accuracy values also increase as fewer classes are considered in the legend, since similar classes are assembled during clustering, which reduces the overlap between groups. However, this accuracy is still low for operational purposes in areas with few changes, even considering the very high accuracy of the land cover classifications used to generate the change mappings (land cover classification with Overall Accuracy higher than 0.98 resulted in change mappings with Overall Accuracy around 0.83). View Full-Text
Keywords: change detection, multi-legend, pixel based classification, region based classification, Amazon change detection, multi-legend, pixel based classification, region based classification, Amazon
►▼ Show Figures 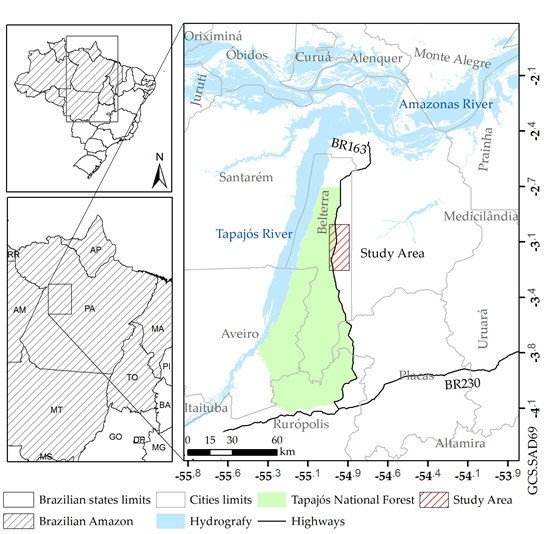