In this study, six Arctic sea ice thickness products are compared: the AVHRR Polar Pathfinder-extended (APP-x), ICESat, CryoSat-2, SMOS, NASA IceBridge aircraft flights, and the Pan-Arctic Ice Ocean Modeling and Assimilation System (PIOMAS). The satellite products are based on three different retrieval methods: an energy budget approach, measurements of ice freeboard, and the relationship between passive microwave brightness temperatures and thin ice thickness. Inter-comparisons are done for the periods of overlap from 2003 to 2013. Results show that ICESat sea ice is thicker than APP-x and PIOMAS overall, particularly along the north coast of Greenland and Canadian Archipelago. The relative differences of APP-x and PIOMAS with ICESat are −0.48 m and −0.31 m, respectively. APP-x underestimates thickness relative to CryoSat-2, with a mean difference of −0.19 m. The biases for APP-x, PIOMAS, and CryoSat-2 relative to IceBridge thicknesses are 0.18 m, 0.18 m, and 0.29 m. The mean difference between SMOS and CryoSat-2 for 0~1 m thick ice is 0.13 m in March and −0.24 m in October. All satellite-retrieved ice thickness products and PIOMAS overestimate the thickness of thin ice (1 m or less) compared to IceBridge for which SMOS has the smallest bias (0.26 m). The spatial correlation between the datasets indicates that APP-x and PIOMAS are the most similar, followed by APP-x and CryoSat-2. View Full-Text
Keywords: sea ice thickness; Arctic; remote sensing; satellite; ICESat; CryoSat-2; SMOS; IceBridge; PIOMAS; APP-x sea ice thickness; Arctic; remote sensing; satellite; ICESat; CryoSat-2; SMOS; IceBridge; PIOMAS; APP-x
►▼ Show Figures 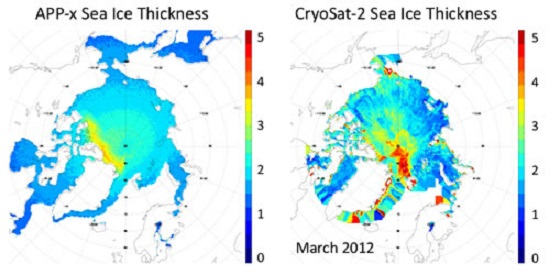