Imagine All the Plants: Evaluation of a Light-Field Camera for On-Site Crop Growth Monitoring
Previous Article in Journal

Monitoring the dynamics in wheat crops requires near-term observations with high spatial resolution due to the complex factors influencing wheat growth variability. We studied the prospects for monitoring the biophysical parameters and nitrogen status in wheat crops with low-cost imagery acquired from unmanned aerial vehicles (UAV) over an 11 ha field. Flight missions were conducted at approximately 50 m in altitude with a commercial copter and camera system—three missions were performed between booting and maturing of the wheat plants and one mission after tillage. Ultra-high resolution orthoimages of 1.2 cm·px−1 and surface models were generated for each mission from the standard red, green and blue (RGB) aerial images. The image variables were extracted from image tone and surface models, e.g., RGB ratios, crop coverage and plant height. During each mission, 20 plots within the wheat canopy with 1 × 1 m2 sample support were selected in the field, and the leaf area index, plant height, fresh and dry biomass and nitrogen concentrations were measured. From the generated UAV imagery, we were able to follow the changes in early senescence at the individual plant level in the wheat crops. Changes in the pattern of the wheat canopy varied drastically from one mission to the next, which supported the need for instantaneous observations, as delivered by UAV imagery. The correlations between the biophysical parameters and image variables were highly significant during each mission, and the regression models calculated with the principal components of the image variables yielded R2 values between 0.70 and 0.97. In contrast, the models of the nitrogen concentrations yielded low R2 values with the best model obtained at flowering (R2 = 0.65). The nitrogen nutrition index was calculated with an accuracy of 0.10 to 0.11 NNI for each mission. For all models, information about the surface models and image tone was important. We conclude that low-cost RGB UAV imagery will strongly aid farmers in observing biophysical characteristics, but it is limited for observing the nitrogen status within wheat crops. View Full-Text
Keywords: unmanned aerial vehicle; leaf area index; biomass; nitrogen; NNI; crop surface model; precision agriculture; remote sensing unmanned aerial vehicle; leaf area index; biomass; nitrogen; NNI; crop surface model; precision agriculture; remote sensing
►▼ Show Figures 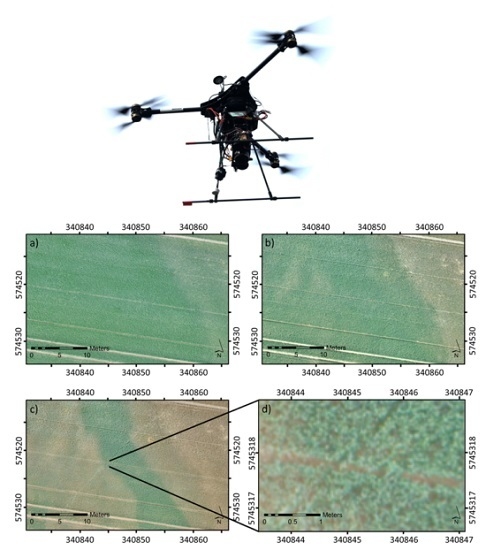