Studies that investigate and evaluate the quality, limitations and uncertainties of satellite rainfall estimates are fundamental to assure the correct and successful use of these products in applications, such as climate studies, hydrological modeling and natural hazard monitoring. Over regions of the globe that lack in situ observations, such studies are only possible through intensive field measurement campaigns, which provide a range of high quality ground measurements, e.g., CHUVA (Cloud processes of tHe main precipitation systems in Brazil: A contribUtion to cloud resolVing modeling and to the GlobAl Precipitation Measurement) and GoAmazon (Observations and Modeling of the Green Ocean Amazon) over the Brazilian Amazon during 2014/2015. This study aims to assess the characteristics of Global Precipitation Measurement (GPM) satellite-based precipitation estimates in representing the diurnal cycle over the Brazilian Amazon. The Integrated Multi-satellitE Retrievals for Global Precipitation Measurement (IMERG) and the Goddard Profiling Algorithm—Version 2014 (GPROF2014) algorithms are evaluated against ground-based radar observations. Specifically, the S-band weather radar from the Amazon Protection National System (SIPAM), is first validated against the X-band CHUVA radar and then used as a reference to evaluate GPM precipitation. Results showed satisfactory agreement between S-band SIPAM radar and both IMERG and GPROF2014 algorithms. However, during the wet season, IMERG, which uses the GPROF2014 rainfall retrieval from the GPM Microwave Imager (GMI) sensor, significantly overestimates the frequency of heavy rainfall volumes around 00:00–04:00 UTC and 15:00–18:00 UTC. This overestimation is particularly evident over the Negro, Solimões and Amazon rivers due to the poorly-calibrated algorithm over water surfaces. On the other hand, during the dry season, the IMERG product underestimates mean precipitation in comparison to the S-band SIPAM radar, mainly due to the fact that isolated convective rain cells in the afternoon are not detected by the satellite precipitation algorithm. View Full-Text
Keywords: satellite rainfall estimates; radar rainfall estimates; GPM; IMERG; GPROF; uncertainty quantification; GoAmazon satellite rainfall estimates; radar rainfall estimates; GPM; IMERG; GPROF; uncertainty quantification; GoAmazon
►▼ Show Figures 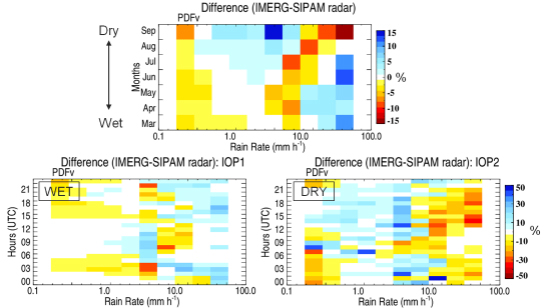