Remote-sensing-derived elevation data sets often suffer from noise and outliers due to various reasons, such as the physical limitations of sensors, multiple reflectance, occlusions and low contrast of texture. Outliers generally have a seriously negative effect on DEM construction. Some interpolation methods like ordinary kriging (OK) are capable of smoothing noise inherent in sample points, but are sensitive to outliers. In this paper, a robust algorithm of multiquadric method (MQ) based on an Improved Huber loss function (MQ-IH) has been developed to decrease the impact of outliers on DEM construction. Theoretically, the improved Huber loss function is null for outliers, quadratic for small errors, and linear for others. Simulated data sets drawn from a mathematical surface with different error distributions were employed to analyze the robustness of MQ-IH. Results indicate that MQ-IH obtains a good balance between efficiency and robustness. Namely, the performance of MQ-IH is comparative to those of the classical MQ and MQ based on the Classical Huber loss function (MQ-CH) when sample points follow a normal distribution, and the former outperforms the latter two when sample points are subject to outliers. For example, for the Cauchy error distribution with the location parameter of 0 and scale parameter of 1, the root mean square errors (RMSEs) of MQ-CH and the classical MQ are 0.3916 and 1.4591, respectively, whereas that of MQ-IH is 0.3698. The performance of MQ-IH is further evaluated by qualitative and quantitative analysis through a real-world example of DEM construction with the stereo-images-derived elevation points. Results demonstrate that compared with the classical interpolation methods, including natural neighbor (NN), OK and ANUDEM (a program that calculates regular grid digital elevation models (DEMs) with sensible shape and drainage structure from arbitrarily large topographic data sets), and two versions of MQ, including the classical MQ and MQ-CH, MQ-IH has a better ability of maximally reducing the impact of outliers, while faithfully preserving terrain features. Theoretically, MQ-IH is not a promising interpolation method, and some side effects can be found from its simulation results. For example, the contours of MQ-IH are coarser than ANUDEM in some locations of the real-world study site, and its hill shade may not strictly agree with the real-world surface at rough terrain. Furthermore, the computing cost of MQ-IH is much bigger than that of the classical interpolation methods. However, compared with the classical interpolation methods, MQ-IH has significant potential for interpolating remote-sensing-derived elevation data sets. View Full-Text
Keywords: outlier; interpolation; stereo-images; DEM; robust; accuracy outlier; interpolation; stereo-images; DEM; robust; accuracy
►▼ Show Figures 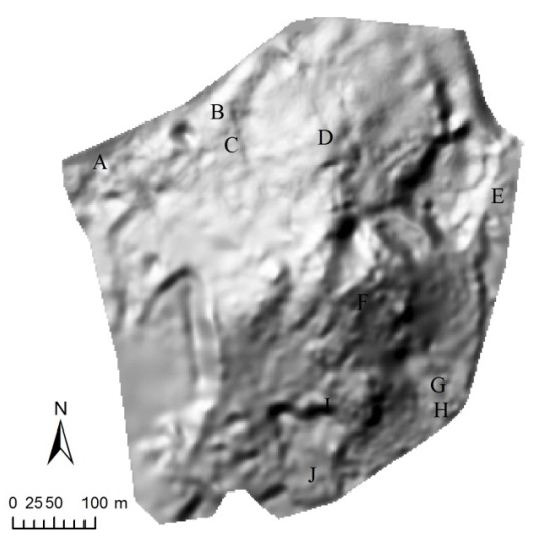