An Integrated Method Combining Remote Sensing Data and Local Knowledge for the Large-Scale Estimation of Seismic Loss Risks to Buildings in the Context of Rapid Socioeconomic Growth: A Case Study in Tangshan, China
Previous Article in Journal

In the megadiverse tropical mountain forest in the Andes of southern Ecuador, a global biodiversity hotspot, the use of fire to clear land for cattle ranching is leading to the invasion of an aggressive weed, the bracken fern, which is threatening diversity and the provisioning of ecosystem services. To find sustainable land use options adapted to the local situation, a profound knowledge of the long-term spatiotemporal patterns of land cover change and its drivers is necessary, but hitherto lacking. The complex topography and the high cloud frequency make the use of remote sensing in this area a challenge. To deal with these conditions, we pursued specific pre-processing steps before classifying five Landsat scenes from 1975 to 2001. Then, we quantified land cover changes and habitat fragmentation, and we investigated landscape changes in relation to key spatial elements (altitude, slope, and distance from roads). Good classification results were obtained with overall accuracies ranging from 94.5% to 98.5% and Kappa statistics between 0.75 and 0.98. Forest was strongly fragmented due to the rapid expansion of the arable frontier and the even more rapid invasion by bracken. Unexpectedly, more bracken-infested areas were converted to pastures than vice versa, a practice that could alleviate pressure on forests if promoted. Road proximity was the most important spatial element determining forest loss, while for bracken the altitudinal range conditioned the degree of invasion in deforested areas. The annual deforestation rate changed notably between periods: ~1.5% from 1975 to 1987, ~0.8% from 1987 to 2000, and finally a very high rate of ~7.5% between 2000 and 2001. We explained these inconstant rates through some specific interrelated local and national political and socioeconomic drivers, namely land use policies, credit and tenure incentives, demography, and in particular, a severe national economic and bank crisis. View Full-Text
Keywords: land cover change; remote sensing; Ecuador; Andes; fragmentation; bracken fern; deforestation drivers; Landsat; image pre-processing; attractors of landscape change land cover change; remote sensing; Ecuador; Andes; fragmentation; bracken fern; deforestation drivers; Landsat; image pre-processing; attractors of landscape change
►▼ Show Figures 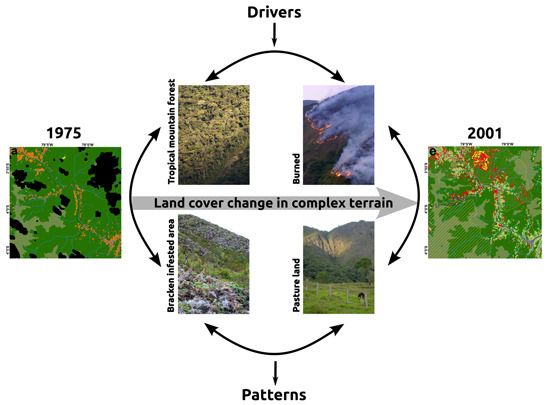