The invasive shrub, Acacia longifolia, native to southeastern Australia, has a negative impact on vegetation and ecosystem functioning in Portuguese dune ecosystems. In order to spectrally discriminate A. longifolia from other non-native and native species, we developed a classification model based on leaf reflectance spectra (350–2500 nm) and condensed leaf tannin content. High variation of leaf tannin content is common for Mediterranean shrub and tree species, in particular between N-fixing and non-N-fixing species, as well as within the genus, Acacia. However, variation in leaf tannin content has not been studied in coastal dune ecosystems in southwest Portugal. We hypothesized that condensed tannin concentration varies significantly across species, further allowing for distinguishing invasive, nitrogen-fixing A. longifolia from other vegetation based on leaf spectral reflectance data. Spectral field measurements were carried out using an ASD FieldSpec FR spectroradiometer attached to an ASD leaf clip in order to collect 750 in situ leaf reflectance spectra of seven frequent plant species at three study sites in southwest Portugal. We applied partial least squares (PLS) regression to predict the obtained leaf reflectance spectra of A. longifolia individuals to their corresponding tannin concentration. A. longifolia had the lowest tannin concentration of all investigated species. Four wavelength regions (675–710 nm, 1060–1170 nm, 1360–1450 nm and 1630–1740 nm) were identified as being highly correlated with tannin concentration. A spectra-based classification model of the different plant species was calculated using a principal component analysis-linear discriminant analysis (PCA-LDA). The best prediction of A. longifolia was achieved by using wavelength regions between 1360–1450 nm and 1630–1740 nm, resulting in a user’s accuracy of 98.9%. In comparison, selecting the entire wavelength range, the best user accuracy only reached 86.5% for A. longifolia individuals. View Full-Text
Keywords: Acacia longifolia; classification; field spectroscopy; hyperspectral; invasive; Portugal Acacia longifolia; classification; field spectroscopy; hyperspectral; invasive; Portugal
►▼ Show Figures 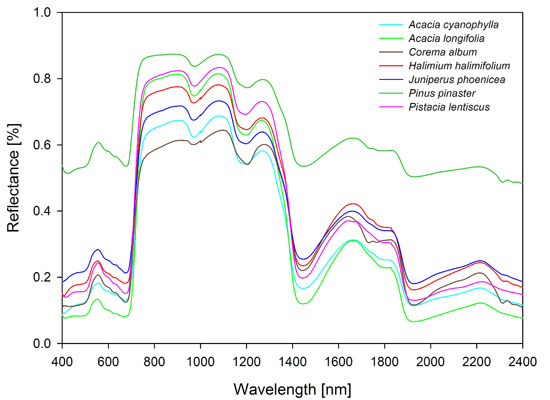