The new generation of artificial satellites is providing a huge amount of Earth observation images whose exploitation can report invaluable benefits, both economical and environmental. However, only a small fraction of this data volume has been analyzed, mainly due to the large human resources needed for that task. In this sense, the development of unsupervised methodologies for the analysis of these images is a priority. In this work, a new unsupervised segmentation algorithm for satellite images is proposed. This algorithm is based on the rough-set theory, and it is inspired by a previous segmentation algorithm defined in the RGB color domain. The main contributions of the new algorithm are: (i) extending the original algorithm to four spectral bands; (ii) the concept of the superpixel is used in order to define the neighborhood similarity of a pixel adapted to the local characteristics of each image; (iii) and two new region merged strategies are proposed and evaluated in order to establish the final number of regions in the segmented image. The experimental results show that the proposed approach improves the results provided by the original method when both are applied to satellite images with different spectral and spatial resolutions. View Full-Text
Keywords: unsupervised segmentation; histon; rough-set; region merging unsupervised segmentation; histon; rough-set; region merging
►▼ Show Figures 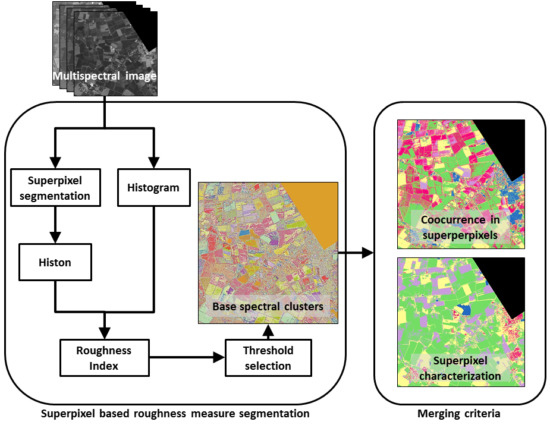