The Spatiotemporal Implications of Urbanization for Urban Heat Islands in Beijing: A Predictive Approach Based on CA–Markov Modeling (2004–2050)
Previous Article in Journal

A Systematic Review of Landsat Data for Change Detection Applications: 50 Years of Monitoring the Earth

Due to the remote location and the extreme climate, monitoring stations in Arctic rivers such as Lena in Siberia have been decreasing through time. Every year, after a long harsh winter, the accumulated snow on the Lena watershed melts, leading to the major annual spring flood event causing heavy transport of sediments, organic carbon, and trace metals, both into as well as within the delta. This study aims to analyze the hydrodynamic processes of the spring flood taking place every year in the Lena Delta. Thus, a combination of remote sensing techniques and hydrodynamic modeling methodologies is used to overcome limitations caused by missing ground-truth data. As a test site for this feasibility study, the outlet of the Lena River to its delta was selected. Lena Delta is an extensive wetland spanning from northeast Siberia into the Arctic Ocean. Spaceborne Synthetic Aperture Radar (SAR) data of the TerraSAR-X/TanDEM-X satellite mission served as input for the hydrodynamic modeling software HEC-RAS. The model resulted in inundation areas, flood depths, and flow velocities. The model accuracy assessed by comparing the multi-temporal modeled inundation areas with the satellite-derived inundation areas ranged between 65 and 95%, with kappa coefficients ranging between 0.78 and 0.97, showing moderate to almost perfect levels of agreement between the two inundation boundaries. Modeling results of high flow discharges show a better agreement with the satellite-derived inundation areas compared to that of lower flow discharges. Overall, the remote-sensing-based hydrodynamic modeling succeeded in indicating the increase and decrease in the inundation areas, flood depths, and flow velocities during the annual flood events. View Full-Text
Keywords: TerraSAR-X; TanDEM-X; hydrodynamic modeling; spring flood; Arctic watershed; remote sensing of rivers; HEC-RAS TerraSAR-X; TanDEM-X; hydrodynamic modeling; spring flood; Arctic watershed; remote sensing of rivers; HEC-RAS
►▼ Show Figures 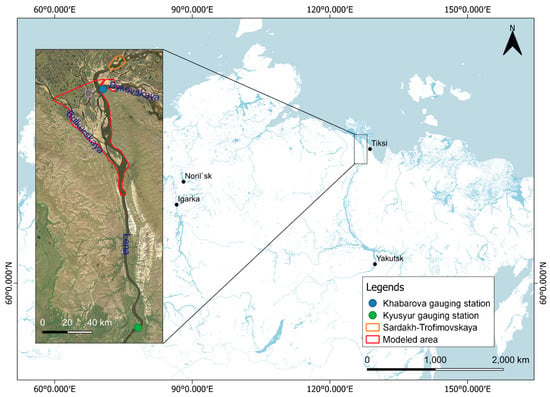