The Global Ecosystem Dynamics Investigation (GEDI) Light Detection And Ranging (LiDAR) altimetry mission was recently launched to the International Space Station with a capability of providing billions of high-quality measurements of vertical structures globally. This study assesses the accuracy of the GEDI LiDAR altimetry estimation of lake water levels. The difference between GEDI’s elevation estimates to in-situ hydrological gauge water levels was determined for eight natural lakes in Switzerland. The elevation accuracy of GEDI was assessed as a function of each lake, acquisition date, and the laser used for acquisition (beam). The GEDI elevation estimates exhibit an overall good agreement with in-situ water levels with a mean elevation bias of 0.61 cm and a standard deviation (std) of 22.3 cm and could be lowered to 8.5 cm when accounting for instrumental and environmental factors. Over the eight studied lakes, the bias between GEDI elevations and in-situ data ranged from −13.8 cm to +9.8 cm with a standard deviation of the mean difference ranging from 14.5 to 31.6 cm. Results also show that the acquisition date affects the precision of the GEDI elevation estimates. GEDI data acquired in the mornings or late at night had lower bias in comparison to acquisitions during daytime or over weekends. Even though GEDI is equipped with three identical laser units, a systematic bias was found based on the laser units used in the acquisitions. Considering the eight studied lakes, the beams with the highest elevation differences compared to in-situ data were beams 1 and 6 (standard deviations of −10.2 and +18.1 cm, respectively). In contrast, the beams with the smallest mean elevation difference to in-situ data were beams 5 and 7 (−1.7 and −2.5 cm, respectively). The remaining beams (2, 3, 4, and 8) showed a mean difference between −7.4 and +4.4 cm. The standard deviation of the mean difference, however, was similar across all beams and ranged from 17.2 and 22.9 cm. This study highlights the importance of GEDI data for estimating water levels in lakes with good accuracy and has potentials in advancing our understanding of the hydrological significance of lakes especially in data scarce regions of the world. View Full-Text
Keywords: lidar; GEDI; elevations; lakes; altimetry lidar; GEDI; elevations; lakes; altimetry
►▼ Show Figures 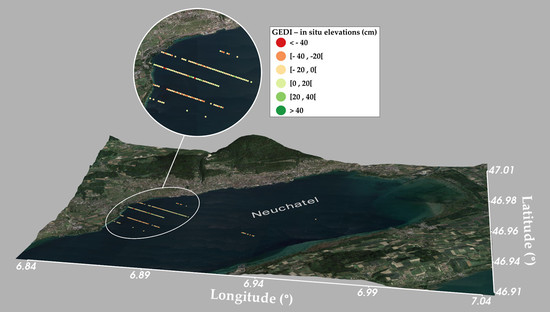