The Zengwen desilting tunnel project installed an Elephant Trunk Steel Pipe (ETSP) at the bottom of the reservoir that is designed to connect the new bypass tunnel and reach downward to the sediment surface. Since ETSP is huge and its underwater installation is an unprecedented construction method, there are several uncertainties in its dynamic motion changes during installation. To assure construction safety, a 1:20 ETSP scale model was built to simulate the underwater installation procedure, and its six-degrees-of-freedom (6-DOF) motion parameters were monitored by offline underwater 3D rigid object tracking and photogrammetry. Three cameras were used to form a multicamera system, and several auxiliary devices—such as waterproof housing, tripods, and a waterproof LED—were adopted to protect the cameras and to obtain clear images in the underwater environment. However, since it is difficult for the divers to position the camera and ensure the camera field of view overlap, each camera can only observe the head, middle, and tail parts of ETSP, respectively, leading to a small overlap area among all images. Therefore, it is not possible to perform a traditional method via multiple images forward intersection, where the camera’s positions and orientations have to be calibrated and fixed in advance. Instead, by tracking the 3D coordinates of ETSP and obtaining the camera orientation information via space resection, we propose a multicamera coordinate transformation and adopted a single-camera relative orientation transformation to calculate the 6-DOF motion parameters. The offline procedure is to first acquire the 3D coordinates of ETSP by taking multiposition images with a precalibrated camera in the air and then use the 3D coordinates as control points to perform the space resection of the calibrated underwater cameras. Finally, we calculated the 6-DOF of ETSP by using the camera orientation information through both multi- and single-camera approaches. In this study, we show the results of camera calibration in the air and underwater environment, present the 6-DOF motion parameters of ETSP underwater installation and the reconstructed 4D animation, and compare the differences between the multi- and single-camera approaches. View Full-Text
Keywords: underwater photogrammetry; object tracking; 6-DOF; camera calibration underwater photogrammetry; object tracking; 6-DOF; camera calibration
►▼ Show Figures 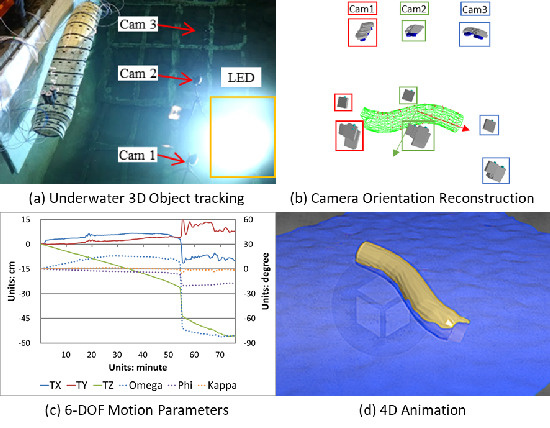