Combined Study of a Significant Mine Collapse Based on Seismological and Geodetic Data—29 January 2019, Rudna Mine, Poland
Next Article in Special Issue

Alpine Treeline Ecotone (ATE), the typically gradual transition zone between closed canopy forest and alpine tundra vegetation in mountain regions, displays an elevational range that is generally constrained by thermal deficits. At landscape scales, precipitation and moisture regimes can suppress ATE elevation below thermal limits, causing variability in ATE position. Recent studies have investigated the relative effects of hydroclimatic variables on ATE position at multiple scales, but less attention has been given to interactions between hydroclimatic variables and disturbance agents, such as fire. Advances in monoplotting have enabled the extraction of canopy cover information from oblique photography. Using airborne lidar, and repeat photography from the Mountain Legacy Project, we observed canopy cover change in West Castle Watershed (Alberta, Canada; ~103 km2; 49.3° N, 114.4° W) over a 92-year period (1914–2006). Two wildfires, occurring 1934 and 1936, provided an opportunity to compare topographic patterns of mortality and succession in the ATE, while factoring by exposure to fire. Aspect was a strong predictor of mortality and succession. Fire-exposed areas accounted for 83.6% of all mortality, with 72.1% of mortality occurring on south- and east-facing slope aspects. Succession was balanced between fire-exposed and unburned areas, with 62.0% of all succession occurring on north- and east-facing slope aspects. The mean elevation increase in closed canopy forest (i.e., the lower boundary of ATE) on north- and east-facing undisturbed slopes was estimated to be 0.44 m per year, or ~44 m per century. The observed retardation of treeline advance on south-facing slopes is likely due to moisture limitation. View Full-Text
Keywords: alpine treeline ecotone; repeat photography; monoplotting; lidar; fire alpine treeline ecotone; repeat photography; monoplotting; lidar; fire
►▼ Show Figures 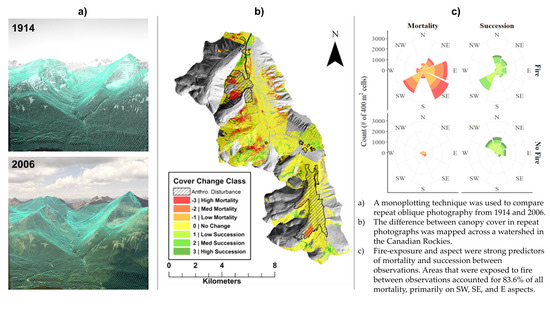