The Eddy Covariance method (EC) is widely used for measuring carbon (C) and energy fluxes at high frequency between the atmosphere and the ecosystem, but has some methodological limitations and a spatial restriction to an area, called a footprint. Remotely sensed information is usually used in combination with eddy covariance data in order to estimate C fluxes over larger areas. In fact, spectral vegetation indices derived from available satellite data can be combined with EC measurements to estimate C fluxes outside of the tower footprint. Following this approach, the present study aimed to model C fluxes for a karst grassland in Slovenia. Three types of model were considered: (1) a linear relationship between Net Ecosystem Exchange (NEE) or Gross Primary Production (GPP) and each vegetation index; (2) a linear relationship between GPP and the product of a vegetation index with PAR (Photosynthetically Active Radiation); and (3) a simplified LUE (Light Use-Efficiency) model assuming a constant LUE. We compared the performance of several vegetation indices derived from two remote platforms (Landsat and Proba-V) as predictors of NEE and GPP, based on three accuracy metrics, the coefficient of determination (R2), the Root Mean Square Error (RMSE) and the Akaike Information Criterion (AIC). Two types of aggregation of flux data were explored: midday average and daily average fluxes. The vapor pressure deficit (VPD) was used to separate the growing season into two phases, a wet and a dry phase, which were considered separately in the modelling process, in addition to the growing season as a whole. The results showed that NDVI is the best predictor of GPP and NEE during the wet phase, whereas water-related vegetation indices, namely LSWI and MNDWI, were the best predictors during the dry phase, both for midday and daily aggregates. Model 1 (linear relationship) was found to be the best in many cases. The best regression equations obtained were used to map GPP and NEE for the whole study area. Digital maps obtained can practically contribute, in a cost-effective way to the management of karst grasslands. View Full-Text
Keywords: eddy covariance; carbon flux; GPP; NEE; vegetation indices; remote sensing; satellite data; GPP map eddy covariance; carbon flux; GPP; NEE; vegetation indices; remote sensing; satellite data; GPP map
►▼ Show Figures 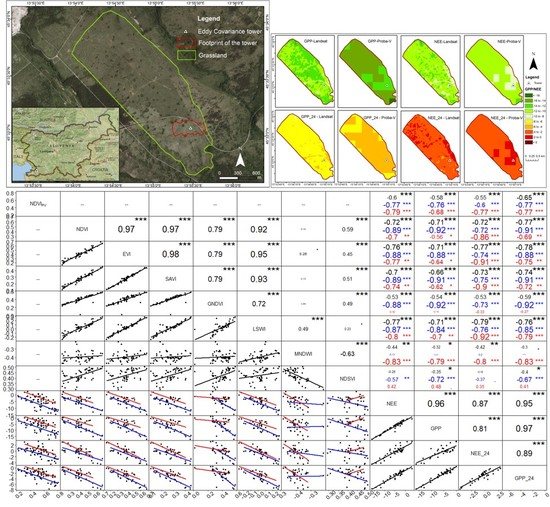