An Evaluation of the EnKF vs. EnOI and the Assimilation of SMAP, SMOS and ESA CCI Soil Moisture Data over the Contiguous US

A number of studies have shown that assimilation of satellite derived soil moisture using the ensemble Kalman Filter (EnKF) can improve soil moisture estimates, particularly for the surface zone. However, the EnKF is computationally expensive since an ensemble of model integrations have to be propagated forward in time. Here, assimilating satellite soil moisture data from the Soil Moisture Active Passive (SMAP) mission, we compare the EnKF with the computationally cheaper ensemble Optimal Interpolation (EnOI) method over the contiguous United States (CONUS). The background error–covariance in the EnOI is sampled in two ways: (i) by using the stochastic spread from an ensemble open-loop run, and (ii) sampling from the model spinup climatology. Our results indicate that the EnKF is only marginally superior to one version of the EnOI. Furthermore, the assimilation of SMAP data using the EnKF and EnOI is found to improve the surface zone correlation with in situ observations at a significance level. The EnKF assimilation of SMAP data is also found to improve root-zone correlation with independent in situ data at the same significance level; however this improvement is dependent on which in situ network we are validating against. We evaluate how the quality of the atmospheric forcing affects the analysis results by prescribing the land surface data assimilation system with either observation corrected or model derived precipitation. Surface zone correlation skill increases for the analysis using both the corrected and model derived precipitation, but only the latter shows an improvement at the significance level. The study also suggests that assimilation of satellite derived surface soil moisture using the EnOI can correct random errors in the atmospheric forcing and give an analysed surface soil moisture close to that of an open-loop run using observation derived precipitation. Importantly, this shows that estimates of soil moisture could be improved using a combination of assimilating SMAP using the computationally cheap EnOI while using model derived precipitation as forcing. Finally, we assimilate three different Level-2 satellite derived soil moisture products from the European Space Agency Climate Change Initiative (ESA CCI), SMAP and SMOS (Soil Moisture and Ocean Salinity) using the EnOI, and then compare the relative performance of the three resulting analyses against in situ soil moisture observations. In this comparison, we find that all three analyses offer improvements over an open-loop run when comparing to in situ observations. The assimilation of SMAP data is found to perform marginally better than the assimilation of SMOS data, while assimilation of the ESA CCI data shows the smallest improvement of the three analysis products. View Full-Text
Keywords: land data assimilation; EnKF; EnOI; SMAP; SMOS; ESA CCI for soil moisture land data assimilation; EnKF; EnOI; SMAP; SMOS; ESA CCI for soil moisture
►▼ Show Figures 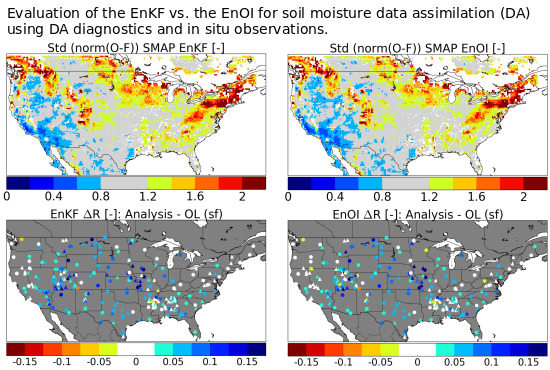