The atmospheric contribution constitutes about 90 percent of the signal measured by satellite sensors over oceanic and inland waters. Over open ocean waters, the atmospheric contribution is relatively easy to correct as it can be assumed that water-leaving radiance in the near-infrared (NIR) is equal to zero and it can be performed by applying a relatively simple dark-pixel-correction-based type of algorithm. Over inland and coastal waters, this assumption cannot be made since the water-leaving radiance in the NIR is greater than zero due to the presence of water components like sediments and dissolved organic particles. The aim of this study is to determine the most appropriate atmospheric correction processor to be applied on Sentinel-2 MultiSpectral Imagery over several types of inland waters. Retrievals obtained from different atmospheric correction processors (i.e., Atmospheric correction for OLI ‘lite’ (ACOLITE), Case 2 Regional Coast Colour (here called C2RCC), Case 2 Regional Coast Colour for Complex waters (here called C2RCCCX), Image correction for atmospheric effects (iCOR), Polynomial-based algorithm applied to MERIS (Polymer) and Sen2Cor or Sentinel 2 Correction) are compared against in situ reflectance measured in lakes and reservoirs in the Valencia region (Spain). Polymer and C2RCC are the processors that give back the best statistics, with coefficients of determination higher than 0.83 and mean average errors less than 0.01. An evaluation of the performance based on water types and single bands–classification based on ranges of in situ chlorophyll-a concentration and Secchi disk depth values- showed that performance of these set of processors is better for relatively complex waters. ACOLITE, iCOR and Sen2Cor had a better performance when applied to meso- and hyper-eutrophic waters, compare with oligotrophic. However, other considerations should also be taken into account, like the elevation of the lakes above sea level, their distance from the sea and their morphology. View Full-Text
Keywords: atmospheric correction; complex inland water; Sentinel- 2 MSI; water type classification atmospheric correction; complex inland water; Sentinel- 2 MSI; water type classification
►▼ Show Figures 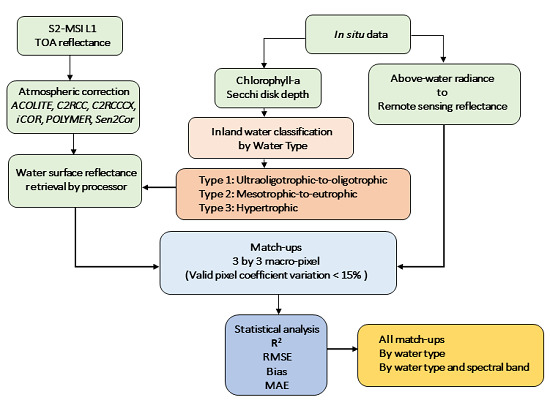