The coastal zones are areas with a high flow of energy and materials where diverse ecosystems are developed. The study of coastal oceanography is important to understand the variability of these ecosystems and determine their role in biogeochemical cycles and climate change. Sea surface temperature (SST) analysis is indispensable for the characterization of physical and biological processes, and it is affected by processes at diverse timescales. The purpose of this work is to analyze the oceanographic variability of the Eastern Coastal Zone of the Gulf of California through the study of the SST from time series analysis of monthly data obtained from remote sensors (AVHRR-Pathfinder Version 5.1 and Version 5 resolution of 4 km, MODIS-Aqua, resolution of 4 km) for the period 1981 to 2016. The descriptive analysis of SST series showed that the values decrease from south to north, as well as the amplitude of the warm period decrease from south to north (cold period increase from south to north). The minimum values occurred during January and February, and ranged between 18 and 20 °C; and maximum values, of about 32 °C, arose in August and September. Cluster analysis allowed to group the data in four regions (south, center, midriff islands and north), the spectral analysis in each region showed frequencies of variation in scales: Annual (the main), seasonal, semiannual, and interannual. The latter is associated with the El Niño and La Niña climatological phenomena. View Full-Text
Keywords: sea surface temperature (SST); oceanographic variability; Eastern Coastal Zone; Gulf of California sea surface temperature (SST); oceanographic variability; Eastern Coastal Zone; Gulf of California
►▼ Show Figures 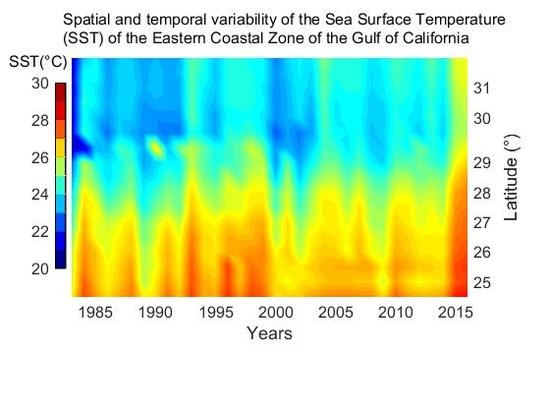