Implying the prosperity and development of the city, impervious surface area (ISA) is playing an increasingly important role in ecological processes, microclimate, material and energy flows, and urban flood. The free sub-meter resolution Google Earth image, which is integrated by several high spatial resolution data, appears to have potential for high-resolution ISA extraction, where present study is rare and performances remain to be improved. Due to the high spatial and spectral variation of the urban environment as well as confusion between ISA and soil, the accurate delineating of ISA with traditional (direct) methods can be costly and time-consuming, which is in a word resource-intensive. However, this paper presents a novel indirect ISA extraction conceptual model and a new detecting and masking background land cover (DMBLC) approach that: uses a freely available, high-resolution dataset; requires a reduced set of training samples; and consists of relatively simple, common, and feasible image processing steps. The key characteristic of DMBLC is to detect the background of ISA (vegetation, soil, and water) accurately and obtain the ISA by masking the background. The approach relies on background detection to avoid the predicaments of direct ISA extraction. Water can be directly gained by water body vector data, in DMBLC; mixture tuned matched filtering (MTMF) is exploited to detect vegetation and soil, image segmentation is used to mitigate the spectral variation problem within the same land cover, and segment rectangularity reduces the confusion between ISA and soil. From experiments in a core area of Fuzhou, China, the DMBLC approach reached high performance and outperformed the powerful traditional support vector machines (SVM) method (overall accuracy of 94.45% and Kappa coefficient of 0.8885, compared to 86.44% and 0.7329, respectively). From the comparison of different levels of complexity within the inner processing steps, it is confirmed that the DMBLC approach is a powerful and flexible changed framework for indirect ISA extraction, which can be improved by using more advanced inner methods. View Full-Text
Keywords: impervious surface area; urban land cover; indirect extraction; google earth image; target detection; image segmentation impervious surface area; urban land cover; indirect extraction; google earth image; target detection; image segmentation
►▼ Show Figures 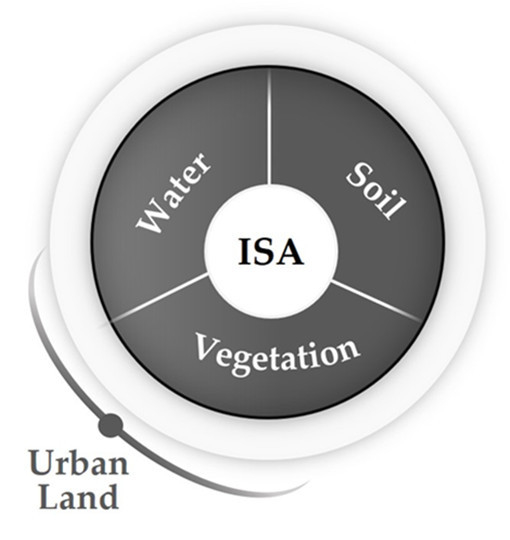