GPS-Derived Fault Coupling of the Longmenshan Fault Associated with the 2008 Mw Wenchuan 7.9 Earthquake and Its Tectonic Implications
Previous Article in Journal

Long-Term Monitoring of the Impacts of Disaster on Human Activity Using DMSP/OLS Nighttime Light Data: A Case Study of the 2008 Wenchuan, China Earthquake

Time series monitoring of earthquake-stricken areas is significant in evaluating post-disaster reconstruction and recovery. The time series of nighttime light (NTL) data collected by the defense meteorological satellite program-operational linescan system (DMSP/OLS) sensors provides a unique and valuable resource to study changes in human activity (HA) because of the long period of available data. In this paper, the DMSP/OLS NTL images’ digital number (DN) is used as a proxy for the intensity of HA since there is a high correlation between them. The purpose of this study is to develop a methodology to analyze the changes of intensity and distribution of HA in different areas affected by a 2008 earthquake in Wenchuan, China. In order to compare the trends of HA before and after the earthquake, the DMSP/OLS NTL images from 2003 to 2013 were processed and analyzed. However, their analysis capability is greatly limited owing to a lack of in-flight calibration. To improve the continuity and comparability of DMSP/OLS NTL images, this study developed an automatic intercalibration method to systematically correct NTL data. The results reveal that: (1) compared with the HA before the earthquake, the reconstruction and recovery of the Wenchuan earthquake have led to a significant increase of HA in earthquake-stricken areas within three years after the earthquake; (2) the fluctuation of HA in a severely-affected area is greater than that in a less-affected area; (3) recovery efforts increase development in the most affected areas to levels that exceeded the rates in similar areas which experienced less damage; and (4) areas alongside roads and close to reconstruction projects exhibited increased development in regions with otherwise low human activity. View Full-Text
Keywords: Wenchuan earthquake; nighttime light; intercalibration; human activity; reconstruction and recovery Wenchuan earthquake; nighttime light; intercalibration; human activity; reconstruction and recovery
►▼ Show Figures 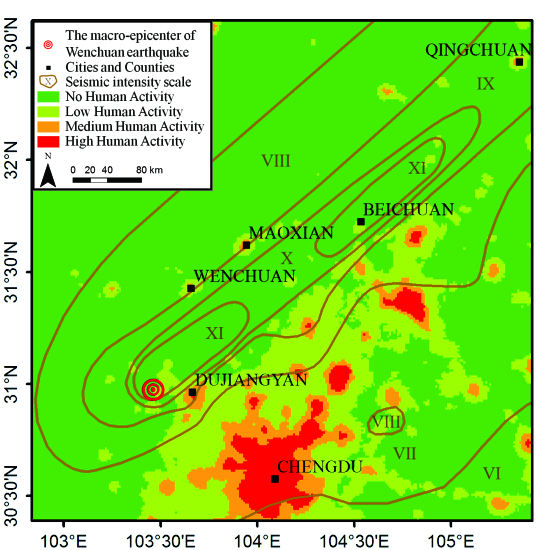