The Effects of Forest Area Changes on Extreme Temperature Indexes between the 1900s and 2010s in Heilongjiang Province, China

In this study, the potential of multispectral airborne laser scanner (ALS) data to model and predict some forest characteristics was explored. Four complementary characteristics were considered, namely, aboveground biomass per hectare, Gini coefficient of the diameters at breast height, Shannon diversity index of the tree species, and the number of trees per hectare. Multispectral ALS data were acquired with an Optech Titan sensor, which consists of three scanners, called channels, working in three wavelengths (532 nm, 1064 nm, and 1550 nm). Standard ALS data acquired with a Leica ALS70 system were used as a reference. The study area is located in Southern Norway, in a forest composed of Scots pine, Norway spruce, and broadleaf species. ALS metrics were extracted for each plot from both elevation and intensity values of the ALS points acquired with both sensors, and for all three channels of the ALS multispectral sensor. Regression models were constructed using different combinations of metrics. The results showed that all four characteristics can be accurately predicted with both sensors (the best R2 being greater than 0.8), but the models based on the multispectral ALS data provide more accurate results. There were differences regarding the contribution of the three channels of the multispectral ALS. The models based on the data of the 532 nm channel seemed to be the least accurate. View Full-Text
Keywords: LiDAR; Shannon index; Gini coefficient; aboveground biomass LiDAR; Shannon index; Gini coefficient; aboveground biomass
►▼ Show Figures 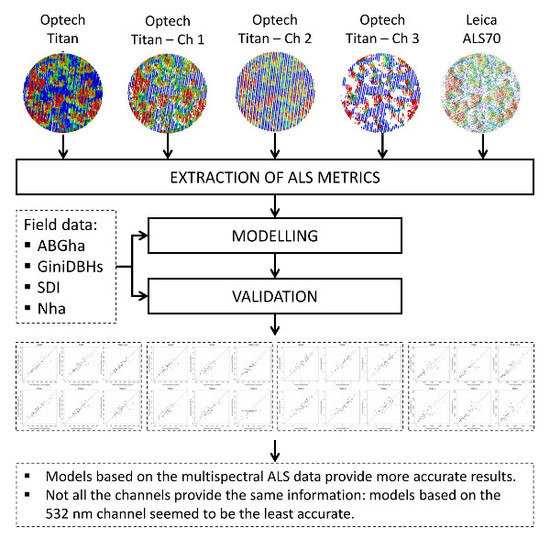