Pre-harvest yield estimation of mango fruit is important for the optimization of inputs and other resources on the farm. Current industry practice of visual counting the fruit on a small number of trees for yield forecasting can be highly inaccurate due to the spatial variability, especially if the trees selected do not represent the entire crop. Therefore, this study evaluated the potential of high resolution WorldView-3 (WV3) satellite imagery to estimate yield of mango by integrating both geometric (tree crown area) and optical (spectral vegetation indices) data using artificial neural network (ANN) model. WV3 images were acquired in 2016–2017 and 2017–2018 growing seasons at the early fruit stage from three orchards in Acacia Hills region, Northern Territory, Australia. Stratified sampling technique (SST) was applied to select 18 trees from each orchard and subsequently ground truthed for yield (kg·tree−1) and fruit number per tree. For each sampled tree, spectral reflectance data and tree crown area (TCA) was extracted from WV3 imagery. The TCA was identified as the most important predictor of both fruit yield (kg·tree−1) and fruit number, followed by NDVI red-edge band when all trees from three orchards in two growing seasons were combined. The results of all sampled trees from three orchards in two growing seasons using ANN model produced a strong correlation (R2 = 0.70 and 0.68 for total fruit yield (kg·tree−1) and fruit number respectively), which suggest that the model can be obtained to predict yield on a regional level. On orchard level also the ANN model produced a high correlation when both growing seasons were combined. However, the model developed in one season could not be applied in another season due to the influence of seasonal variation and canopy condition. Using the relationship derived from the measured yield parameters against combined VIs and TCA data, the total fruit yield (t·ha−1) and fruit number were estimated for each orchard, produced 7% under estimation to less than 1% over estimation. The accuracy of the findings showed the potential of WV3 imagery to better predict the yield parameters than the current practice across the mango industry as well as to quantify lost yield as a result of delayed harvest. View Full-Text
Keywords: WorldView-3 (WV3); Mango (Mangifera indica); tree crown area; yield prediction WorldView-3 (WV3); Mango (Mangifera indica); tree crown area; yield prediction
►▼ Show Figures 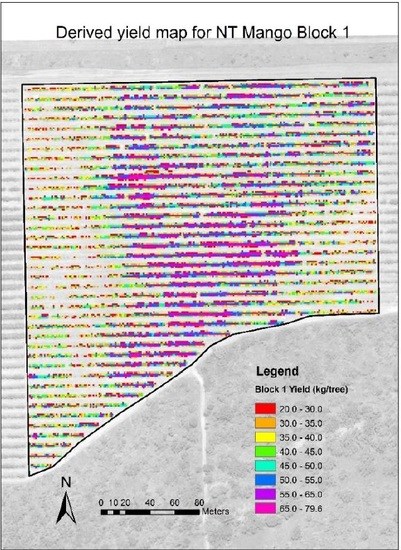