Making Space for Proactive Adaptation of Rapidly Changing Coasts: A Windows of Opportunity Approach
Next Article in Special Issue

Amino Acid: Its Dual Role as Nutrient and Scavenger of Free Radicals in Soil

Hydroxyl free radicals are formed due to auto oxidation of ascorbic. These free radicals are lethal to the soil microbial community. Ascorbic acid helps in the regulation of the developmental processes in plants [1,2]. It serves as a cofactor of many enzymes [3,4], such as prolyl and lysyl hydroxylases [5,6]; 1-aminocyclopropane-1-carboxylate oxidase [7,8,9]; and 2-oxoacid-dependent dioxygenases [3,4]. High levels of ascorbic acid inside plant cell help in its defense against pathogens [10,11,12]. Ascorbic acid helps in the biosynthesis and signaling of many plant hormones like ethylene, gibberellic acid (GA), and abscisic acid (ABA).
Ascorbic acid is a reducing sugar with anti-oxidant properties [13] , and it shows bacteriostatic properties in soil microenvironments [14,15]. It autoxidizes in the presence of air or oxygen to form hydrogen peroxide, and hydrogen peroxide reacts with a ferrous ion to produce the highly reactive hydroxyl ion via the Fenton reaction [16] (Figure 1). The hydroxyl free radical produced during auto oxidation has a bacteriostatic or bactericidal action which kills the microbes in the soil. This is one of the many ways by which ascorbic acid hampers bacterial growth [17]. Certain amino acids can counteract the inhibitory effect of hydroxyl free radicals by checking their oxidizing action. Amino acids are abundantly present in the soil which are mainly derived from root exudates [18] and serve as an important source of nitrogen for microbes in the soil [19].
The aim of this study was to find out how and up to what extent amino acid can counteract the oxidative action of free radicals generated by the autoxidation of ascorbic acid. Efflux of CO2 from soil is an outcome of decomposition activities by both heterotrophic and autotrophic soil organisms [20]. Out of these, heterotrophic soil respiration forms a major component of total soil respiration [21,22,23]. It is mainly controlled by microbial decomposition of soil organic matter, which depends on a plethora of biotic and abiotic factors [24,25]. In this study, we measured soil respiration, which is one of the many biological indicators of soil health [26,27]. We examined the antioxidant property of different classes of amino acids against hydroxyl free radicals formed in the process of auto oxidation of ascorbic acid.

After sampling, soil was sieved through a 5 mm sieve and stored in a refrigerator at 4 degrees centigrade. The dry matter content of each soil sample was calculated before the start of the experiments, and the moisture content of soil was maintained at 25%.
The physical and chemical properties of all soil sampling sites are listed in Table 1. The soil carbon and nitrogen ratio (C/N) was highest in Beech stand (old age, Dystric Luvisol, Oe horizon) and lowest in the Deciduous forest (old age, Rendzic Humic Leptosol, Bwk horizon). Soil pH measurement in water and 0.01 M CaCl2 are two common methods. However, the CaCl2 method is more accurate as soil electrolyte concentration is least affected. The pH of all soil samples was measured by both the methods. The pH of the Beech stands soils of Ae and Oe horizon was lowest.

Different portions of 40 g mineral soil (B,E,G) or 20 g organic soil (A,C,D,F) were added to a 140 mL air tight incubation box followed by the addition of 0 (control), 2.0 mg of ascorbic acid per g of dry soil and its combination with six different amino acids, beta Alanine, D-Glutamic acid, L-Glutamic acid, Citrulline, and L-Ornithine and D-Ornithine, in triplicates. A glass petri dish containing 2 mL 1 M NaOH was placed over the soil, tightly sealed with a lid, and incubated for 6 h at 22 °C. After the incubation, the lids were removed, and the NaOH was transferred to a beaker. Washings with distilled water were given to the petri dish to make sure that all of NaOH was completely removed. A saturated solution of BaCl2 was added to the beaker, and the solution was titrated with phenolphthalein. After the titration, the intensity of respiration was calculated by the formula below [28].
Intensity of respiration was measured as R. where

One-way analysis of variance (ANOVA) was carried out to determine significant differences between the different treatments on each site. Tukey’s test was applied at 5% significance.

In the present study, we observed the respiration rates in seven types of soils before and after treatment with ascorbic acid and amino acids. The different basal respiration rates before any treatment in the soils studied here could be reasonably due to the different microbial activity. After the treatments, we observed an increase in the respiration rate, induced by the addition of ascorbic acid and amino acid in all the soil samples. The lowest increase in respiration was for agriculturally managed soil (beech stand, old age, Dystric Luvisol, Aa horizon) [27].
It has also been established in previous studies that the addition of ascorbic acid leads to an increased soil respiration that could vary depending on soil properties and the organic matter content of soil [29,30,31,32,33]. The responses of microbial communities in soils on the addition of ascorbic acid were of the same order as those reported by other groups [34,35,36].
Increased soil respiration and CO2 efflux were observed, along with increased microbial biomass in arid ecosystems upon the addition of nitrogen sources [37] (the increase was more prominent in bulk soil (0–10) cm depth). Amino acids in both and L- and D- forms can be considered as organic nitrogen and carbon sources for soil microbes [38,39] that can lead to an increase in respiration in soil [40]. However, studies reveal that L- amino acids are more readily taken up by gram-positive bacteria in soil than their D form [38]. So, we conclude that the microbial composition of soil is an important consideration that decides the uptake of amino acids and their enantiomers. The addition of amino acids in soil leads to changes in microbial activity as a measure of microbial respiration, and the rate of this change in activity varies with soil horizon [41]. Here again, microbial communities in different soil types could have affected the differential response for amino acids in our study.
The increased soil respiration, with the addition of ascorbic acid only, could be associated with the fact that ascorbic acid has a structural similarity with hexose sugars because of the presence of the dienol group, which might serve as a carbon source for bacterial respiration [42]. A further increase in respiration upon the addition of amino acid is probably due to the reduction of amino acid itself by hydroxyl free radicals, which protects the microbial flora from getting oxidized (additionally, it acts as a nutrient [43]).
Interestingly, after the addition of the amino acid and ascorbic acid combination, the increase in respiration was different in all seven types of soil because amino acid behaves differently at different pHs. Soil pH plays a distinctive role in the action of an amino acid as an oxidizing or reducing agent. Amino acids with low oxidation potential are most easily oxidized and are an excellent scavenger of free radicals [44]. Basic amino acid is easier to oxidise than acidic amino acid [45].
In our study, L-Glutamic acid induced the highest soil respiration rate in four out of seven soil samples. Glutamic acid is negative charge acidic amino acid. The titration graph of glutamic acid shows that at sufficiently low pH (between 4 and 5), it acts as a basic amino acid [46] and it can easily gain the proton from the hydroxyl free radicals, thereby turning into cation with a single positive charge. Soil samples A, E, F, and G have pH values between 5.1 and 4.1, so in these samples glutamic acid acts as a strong reducing agent and shows maximum power to poison the hydroxyl free radical. Hence, these soil samples show the highest respiration rate with glutamic acid treatment.
Beta alanine shows surprising results in soils B, C, and D. These soil samples have higher pH values (7.1–7.7), i.e., basic samples. The titration graph of beta alanine shows that at a higher pH, beta alanine shows an acidic nature and acts as an oxidizing agent [47]. Notwithstanding, beta alanine treatment shows maximum respiration in soil samples B, C, and D. We explain that such an increase in the respiration activity is due to the high sensitivity of r-strategist microorganisms; their activity, latent before the treatment, became evident after the addition of carbon and nitrogen sources [48].

From this study, we conclude that ascorbic acid autoxidizes to form hydroxyl free radicals, which inhibits microbial growth in the soil. However, an increase in soil respiration due to the addition of amino acid proves that inhibition was not due to ascorbic acid, but it was due to free radical formation.
Another reducing agent can also be used, but the use of amino acid can be best explained in two ways: it has greater oxidation potential than peroxide to get quickly oxidized, and it acts as a nutrient for the soil microbe and plants. From our study, we can conclude that beta alanine induced maximum respiration in basic soils and L-glutamic in acidic soils, as compared to other treatments.

This text was created within the framework of the grant LD14020 “A new compounds of water soluble root exudates of Ambrosia artemisiifolia cultivated under different conditions. 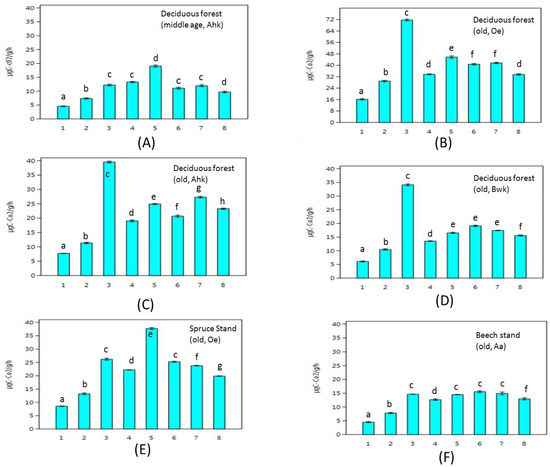