Vaguely Right or Exactly Wrong: Measuring the (Spatial) Distribution of Land Resources, Income and Wealth in Rural Ethiopia
Next Article in Special Issue

The Economic Benefits of the Dokdo Seals Restoration Project in Korea: A Contingent Valuation Study

As the recent withdrawal of the United States from the Paris Agreement has shown, political volatility directly affects climate change mitigation policies, in particular in sectors, such as transport associated with long-term investments by individuals (vehicles) and by local and national governments (urban form and transport infrastructure and services). There is a large potential for cost-effective solutions to reduce greenhouse gas emissions and to improve the sustainability of the transport sector that is yet unexploited. Considering the cost-effectiveness and the potential for co-benefits, it is hard to understand why efficiency gains and CO2 emission reductions in the transport sector are still lagging behind this potential. Particularly interesting is the fact that there is substantial difference among countries with relatively similar economic performances in the development of their transport CO2 emissions over the past thirty years despite the fact that these countries had relatively similar access to efficient technologies and vehicles. This study aims to explore some well-established political science theories on the particular example of climate change mitigation in the transport sector in order to identify some of the factors that could help explain the variations in success of policies and strategies in this sector. The analysis suggests that institutional arrangements that contribute to consensus building in the political process provide a high level of political and policy stability which is vital to long-term changes in energy end-use sectors that rely on long-term investments. However, there is no direct correlation between institutional structures, e.g., corporatism and success in reducing greenhouse gas emissions in the transport sector. Environmental objectives need to be built into the consensus-based policy structure before actual policy progress can be observed. This usually takes longer in consensus democracies than in politically more agile majoritarian policy environments, but the policy stability that builds on corporatist institutional structures is likely to experience changes over a longer-term, in this case to a shift towards low-carbon transport that endures. View Full-Text
Keywords: sustainable transport; policy implementation; governance; institutions sustainable transport; policy implementation; governance; institutions
►▼ Show Figures 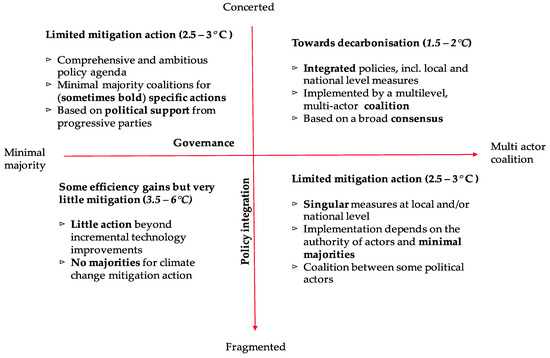