Mushrooming Communities: A Field Guide to Mycology in the Community Forests of Portugal

The paper aims to analyze the extent of Ecosystem Service (ESS) based Adaptation (EbA) to climate change in the policy-making process of Bangladesh. The paper is based on a three stage hybrid policy-making cycle: (i) agenda setting; (ii) policy formulation; and (iii) policy implementation stage, where the contributions of EbA can horizontally (on the ground) or vertically (strategic stage) be mainstreamed and integrated. A total of nine national and sectoral development and climate change policies, and 329 climate change adaptation projects are examined belonging to different policy-making stages. The major findings include that the role of ESS is marginally considered as an adaptation component in most of the reviewed policies, especially at the top strategic level (vertical mainstreaming). However, at the policy formulation and implementation stage (horizontal mainstreaming), they are largely ignored and priority is given to structural adaptation policies and projects, e.g., large scale concrete dams and embankments. For example, ESS’s roles to adapt sectors such as urban planning, biodiversity management and disaster risk reduction are left unchecked, and the implementation stage receives overwhelming priorities and investments to undertake hard adaptation measures such that only 38 projects are related to EbA. The paper argues that: (i) dominant structural adaptation ideologies; (ii) the expert and bureaucracy dependent policy making process; and (iii) the lack of adaptive and integration capacities at institutional level are considerably offsetting the EbA mainstreaming process that need to be adequately addressed for climate change adaptation. View Full-Text
Keywords: Bangladesh; climate change adaptation; Ecosystem services based Adaptation (EbA); ecosystem services; mainstreaming Bangladesh; climate change adaptation; Ecosystem services based Adaptation (EbA); ecosystem services; mainstreaming
►▼ Show Figures 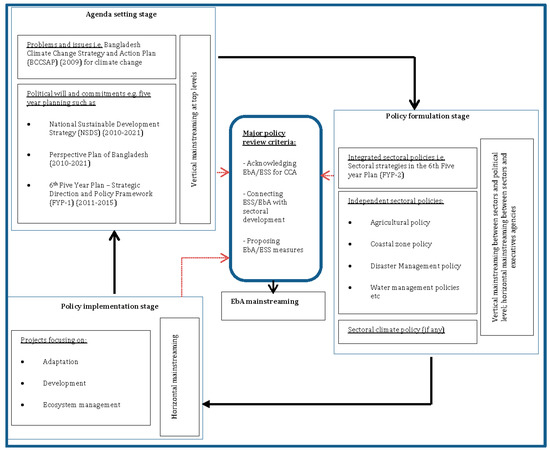