Evaluation of Sulfide Control by Air-Injection in Sewer Force Mains: Field and Laboratory Study
Next Article in Special Issue

Urban rail is widely considered to be a form of low-carbon green transportation, but there is a lack of specific quantitative research to support this. By comparing the mode, distance, and corresponding energy consumption of residents before and after the opening of rail transit, this paper establishes a carbon reduction method for rail transit. A measurement model takes the passenger carbon emissions before the line is opened as the baseline and compares them with the standard after the opening, determining the carbon emissions reduction. The model requires a combination of a large amount of research data, transit smart card data, and GIS network measurement tools as measured data and parameters. The model is then applied to rail transit lines that have opened in Beijing in recent years. The emissions reductions of four different routes are estimated and the carbon emissions reduction effect of rail transit is evaluated. View Full-Text
Keywords: urban rail; mode shift; carbon reduction; smart card data urban rail; mode shift; carbon reduction; smart card data
►▼ Show Figures 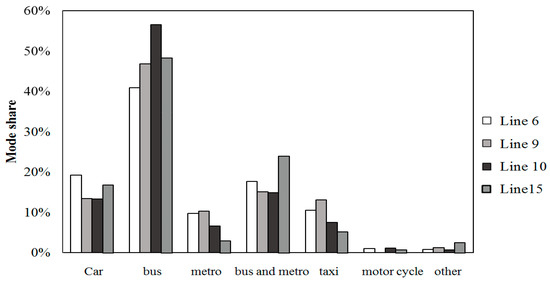