Achieving a Sustainable Urban Form through Land Use Optimisation: Insights from Bekasi City’s Land-Use Plan (2010–2030)
Next Article in Special Issue

Solid-State Fermentation as a Novel Paradigm for Organic Waste Valorization: A Review
Previous Article in Journal

This paper examines the dependence of the healthcare waste (HCW) generation rate on several social-economic and environmental parameters. Correlations were calculated between the quantities of healthcare waste generated (expressed in kg/bed/day) versus economic indices (GDP, healthcare expenditure per capita), social indices (HDI, IHDI, MPI, life expectancy, mean years of schooling, HIV prevalence, deaths due to tuberculosis and malaria, and under five mortality rate), and an environmental sustainability index (total CO2 emissions) from 42 countries worldwide. The statistical analysis included the examination of the normality of the data and the formation of linear multiple regression models to further investigate the correlation between those indices and HCW generation rates. Pearson and Spearman correlation coefficients were also calculated for all pairwise comparisons. Results showed that the life expectancy, the HDI, the mean years of schooling and the CO2 emissions positively affect the HCW generation rates and can be used as statistical predictors of those rates. The resulting best reduced regression model included the life expectancy and the CO2 emissions and explained 85% of the variability of the response. View Full-Text
Keywords: healthcare waste; generation rates; economic factors; social factors; correlation; regression modeling healthcare waste; generation rates; economic factors; social factors; correlation; regression modeling
►▼ Show Figures 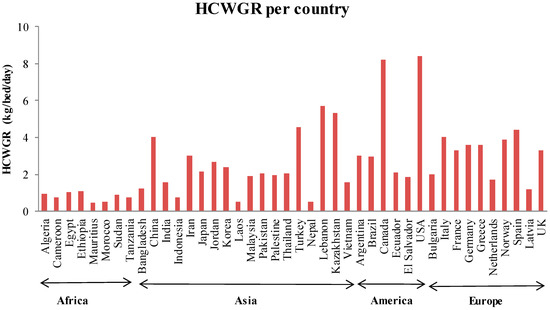