The Role of Sustainability Resources of Large Greenhouse Gas Emitters: The Case of Corporations in Alberta, Canada
Previous Article in Journal

As production and management capacities have become globally standardized, many formerly effective strategies (e.g., cost reduction, speed of technology development, and automation) no longer contribute to competitive advantage [1,2]. Recognizing these threatening environmental changes, companies are striving to achieve competitive advantages with sustainability-oriented innovations [3,4]. One source of advantage can be obtained by engaging and developing talented human resources through organizational development programs such as coaching and mentoring. These popular approaches have been used as catalysts to develop employee potential in business by building one-to-one relationships. South Korea has followed this trend by applying coaching and mentoring extensively and concurrently in the workplace [5].
Coaching is an organizational development strategy that can improve the manager-subordinate relationship [6]. The academic literature reports diverse types of coaching practices, including coaching leadership [7], executive coaching [8], and peer coaching [9]. Although each coaching type has a specific purpose and different coach-coachee relationship, they hold in common the goal to help individuals, groups, or organizations improve competence and performance. Managerial coaching (i.e., coaching leadership or manager-as-coach) is even more prevalent than the other types of coaching in South Korea [5,10]. Managerial coaching means that line managers facilitate their employees’ learning as coach in order to encourage the development of a high-performance work environment [11,12]. More than ever, managers can develop their subordinates within the organization by constructing horizontal and cooperative relationships. Thus, coaching has recently received attention as a form of leadership practiced by managers, and it has been widely applied in many companies [13].
Mentoring is traditionally defined as a developmental relationship between a mentor and protégé who have different levels of expertise and skills [14,15]. Mentors are usually competent senior employees who have rich experience in a particular field, while protégés are considered to have limited skills and experience. Mentoring may be informal or formal, but typically the primary functions associated with mentoring are vocational support, psychosocial support, and role modeling [16,17]. The successful mentor provides opportunities for the protégé to acquire new skills and challenging project assignments, while at the same time engendering psychological safety and encouragement for the protégé through friendship [18]. Furthermore, when he or she identifies with the mentor, the protégé may try to imitate the mentor’s attitude, values, and behaviors [15].
Coaching is well known for playing an important role in enhancing employees’ work-related performance [6], and mentoring impacts on employees’ career development [19]. Coaching and mentoring are acclaimed ways to not only facilitate and support talented employees, but also to accomplish the strategic goals of the company. Accordingly, many companies have adopted simultaneous coaching and mentoring programs in South Korea [5,10]. In general, the employee, as coachee and protégé, receives different benefits from the acting supervisory coach and the non-supervisory mentor. As a result, the employees may confront complex challenges when trying to maintain both coach-coachee relationships and mentor-protégé relationships effectively.
However, most research on coaching and mentoring in organizations has conducted each practice independent of the other, without offering simultaneous or integrated perspectives on both practices in combination. While coaching and mentoring are known to have common effects on employee commitment, turnover intention, performance, and related factors, at the same time, few studies addressed the interaction between coaching and mentoring. Hence, this study focuses on the duality that an employee may experience as a coachee in a coach-coachee dyad and as a protégé in a mentor-protégé dyad. The integrated effects of coaching and mentoring were examined for any synergistic or trade-off effects using the data of 247 triadic relationships in Korean companies that carried out concurrent coaching and mentoring programs. The findings suggest practical implications to maximize the beneficial effects of coaching and mentoring and may contribute to organizations’ strategic renewal by more effectively developing talented individuals.

Coaching generally focuses on activities that promote the learning and development of coachees. In comparison, managerial coaching is a differentiated concept that combines coaching and leadership and is defined as managers’ coaching activities that lead their own subordinates to improve their performance [12]. Thus, managerial coaching is referred to as ‘hierarchical coaching’ or ‘manager-as-coach’ [7].
Managerial coaching is seen as a method to increase firm competitiveness by emphasizing the improvement of relationships between superiors and subordinates [6] and motivates both to improve [20]. Although coaching is generally conducted to reveal the individual’s potential in order to maximize his or her performance, it is not the same as teaching, per se. Managerial coaching is not the same as teaching the existing solutions directly but is targeted at encouraging the self-discovery of what the coachee wants to achieve and at facilitating learning [12,13,21]. Therefore, mutual respect and trust between the coach and the coachee are critical to the effectiveness of coaching [22]. Managerial coaching has received particular attention as a core activity that must be performed by managers [23,24].
Many scholars have developed validated concepts in the domain of managerial coaching for business settings [25]. Ellinger, Ellinger, and Keller [12] defined eight types of supervisory managerial coaching behaviors; ‘using analogies, scenarios, and examples to help employees learn’, ‘encouraging employees to broaden their perspectives by helping them to see the big picture, ‘providing employees with constructive feedback’, ‘soliciting feedback from employees to ensure that the interactions are helpful to them’, ‘providing employees with resources so they can perform job more effectively’, ‘asking questions rather than providing solutions to help employees think through issues’, ‘setting expectations with employees and communications to the broader goals of the organization’, and ‘role-playing with employees to help them see different perspectives’. McLean et al. [26], considering situations in which leaders interact with employees, suggested five managerial skills for managerial coaching based on a careful review of the literature (e.g., [27,28,29]). These managerial coaching skills include ‘development promotion’, ‘open communication’, ‘team approach’, ‘value people’, and ‘accept ambiguity’.
Empirical studies on the efficacy of managerial coaching have investigated outcome variables such as employee learning [30], self-efficacy [31], motivation [32], commitment to quality [33], performance improvement [12,34], and job satisfaction [35]. These same studies also noted that managerial coaching is connected to many aspects of leadership.

Mentoring has long been presented in the management literature as a human resource development program [36] or a resource of personal learning [16]. It is difficult to distinguish mentoring from similar terms, such as advising, counseling, and teaching. In addition to the developmental relationship between a more experienced mentor and a less experienced protégé, the unique characteristic of mentoring is to discuss the protégé’s thoughts regarding future development [37].
Kram [15] classified mentoring functions into vocational support, psychosocial support, and role modeling. Vocational support by mentors helps protégés learn how to fulfill their roles appropriately and to prepare for career development in an organization. The mentor provides the protégé with support, exposure, guidance, protection, and challenging tasks for the protégé’s advancement in an organization [38]. Second, psychosocial support helps the protégé have a sense of psychological stability. The mentor builds empathy for the protégé’s personal concerns and establishes clarity about the protégé’s ego. This psychosocial mentoring includes counseling affirmation and friendship based on a sense of trust [39]. In an early study [40], role modeling was included in the psychological functions of mentoring. A mentor with referent power can impart appropriate behavior patterns, attitudes, and values to protégés; thus, the mentor can efficiently lead the protégé to adapt to the organization. Although most researchers have attuned mentoring functions to unique contexts, they have used close variants of Kram’s definition [36].
A number of studies have proclaimed that mentoring fosters protégés’ wisdom when compared to non-mentored employees in the same organizations [17,18,37,41]. These previous studies revealed that mentoring positively affects both job satisfaction and organizational commitment [19]. Fostering the developmental relationship between mentor and protégé, mentoring reduces role ambiguity and turnover rates [16] and enhances resilience [38]. In particular, mentoring as a channel of informational networks is effective in knowledge management [42] and communication based on strong trust [43,44].

In South Korea, mentoring and coaching have been recognized as the important management tools for organizations to achieve the sustainable competitive advantage by developing employees’ capabilities. Therefore many South Korean firms adopted concurrently both coaching programs, with the acting supervisory coach, and mentoring programs, with the non-supervisory mentor. This study aims to discover the complex interaction effect of the two practices observed in the companies.
The final results supported the hypothesis that mentoring activities increase the positive impact of managerial coaching on employees’ organizational commitment. Furthermore, the moderating effect of mentoring was varied according to the extent of the homogeneity of coach and mentor. Although the moderating effect under the condition of higher mentoring was enhanced when the homogeneity of coach and mentor was low, it was enhanced under the condition of lower mentoring when the homogeneity was high. This study will offer progressive contributions to the literature by integrating the preceding academic results with mentoring and managerial coaching. Also the findings will give practical implications that firms have to consider in the triadic fit between employee, mentor, and coach, whereas most previous studies focused on the dyadic fit between employee and mentor or between employee and coach. 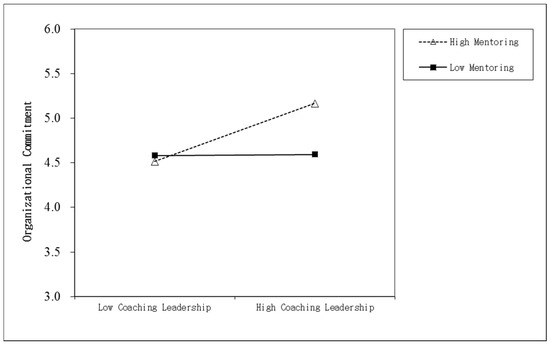 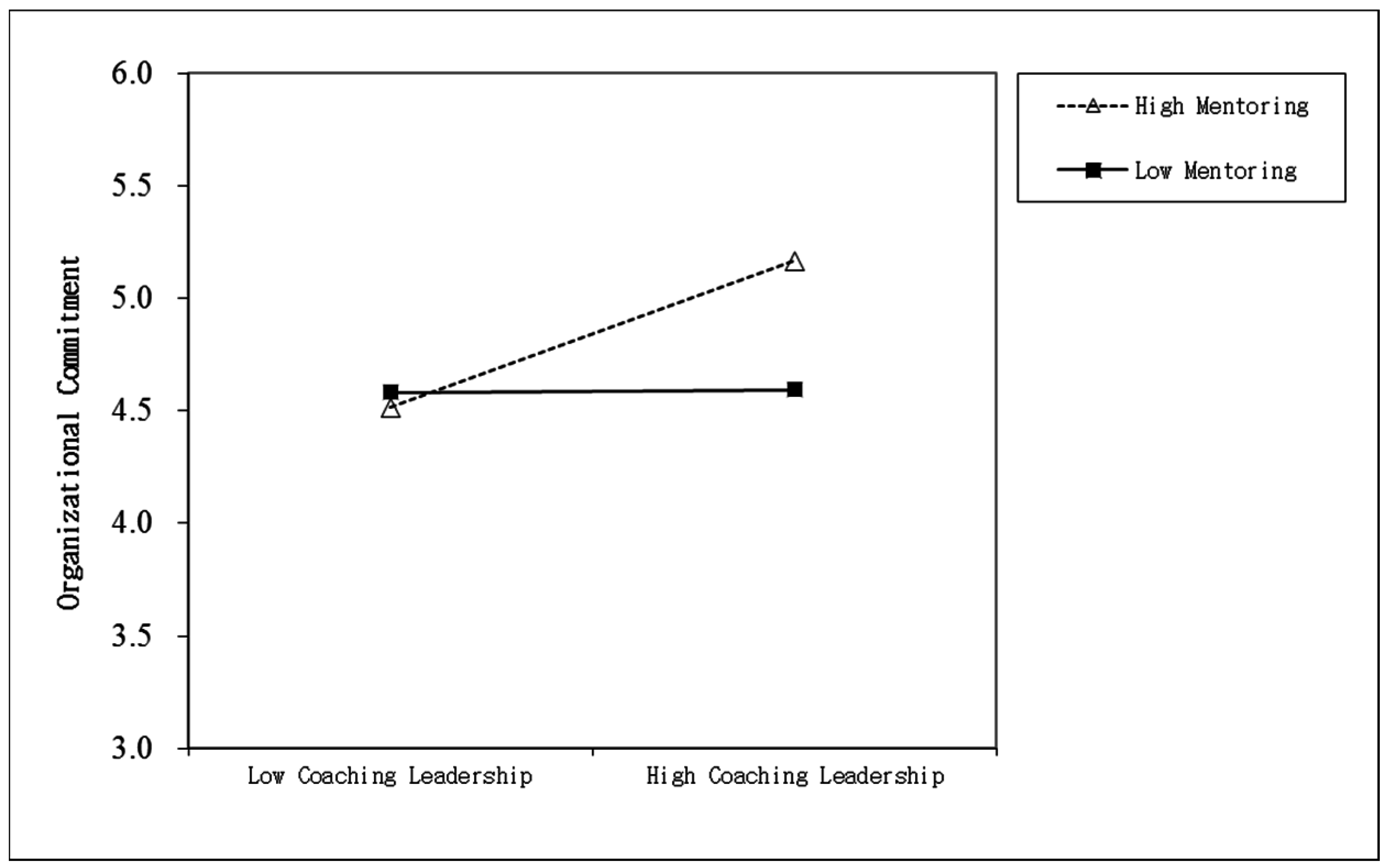 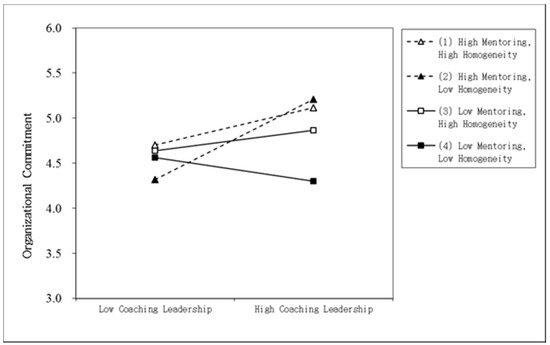 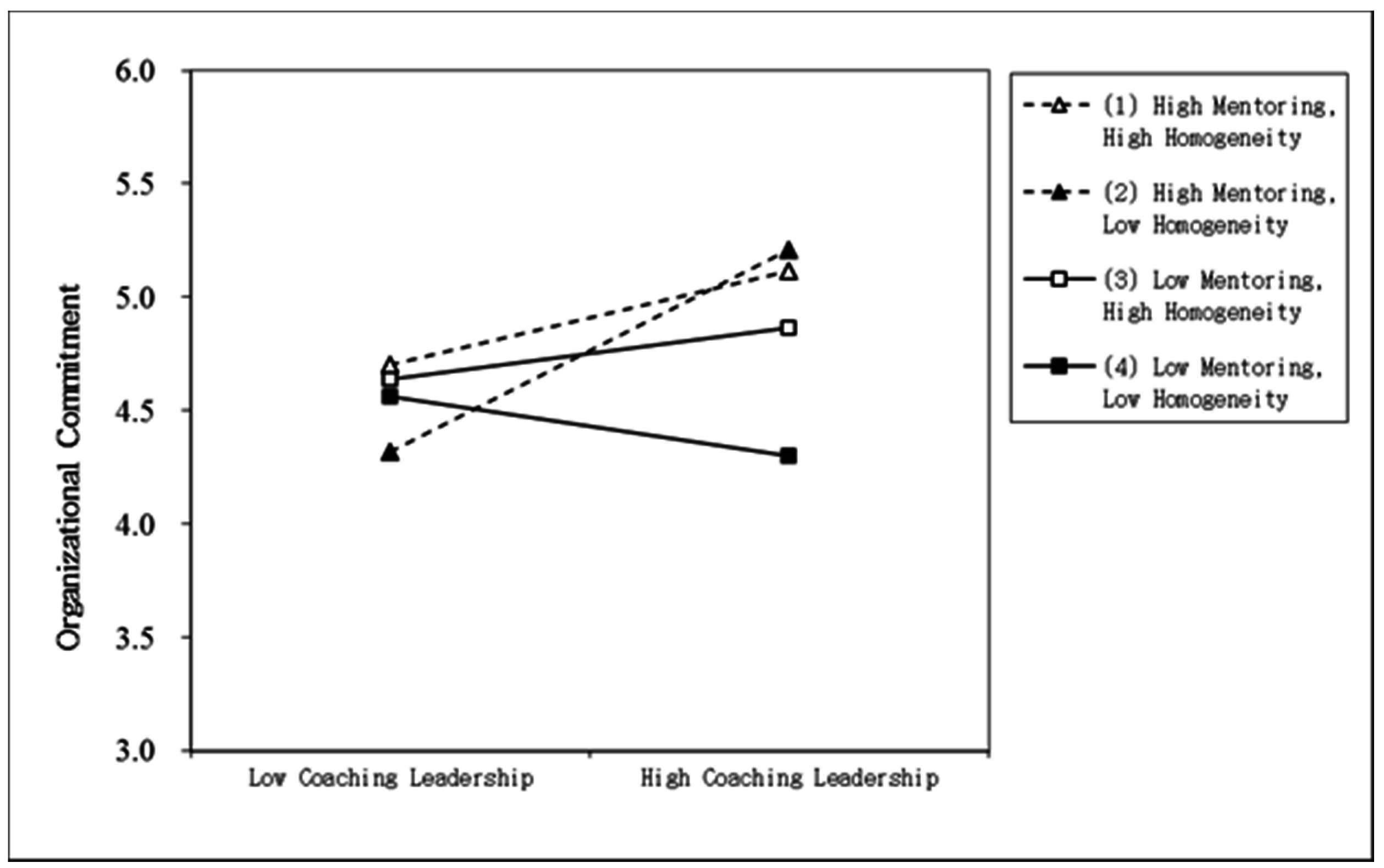 Table 2. Results of multiple regression analysis. a
* p < 0.05, ** p < 0.01; a Standardized coefficients are shown for regression onto employees’ organizational commitment.