On the Sustainability of Co-Authoring Behaviors in Vietnamese Social Sciences: A Preliminary Analysis of Network Data
Previous Article in Journal

Conflicts of Interest and Change in Original Intent: A Case Study of Vacant and Abandoned Homes Repurposed as Community Gardens in a Shrinking City, Daegu, South Korea

How Third-Party CSR Evaluation Matters: Keeping Up with Rivals in CSR Performance Ratings of Korean Firms, 2011–2015

Does corporate social responsibility (CSR) evaluation by third-party entities (i.e., external agencies, including civic organizations) affect the CSR performance of firms? This article explores the question of whether and how third-party CSR ratings change the subsequent CSR behavior and hence performance of rated firms. Combining insights from the research on ratings/rankings and a behavioral theory of firms, we hypothesize that firms with large negative CSR rating gaps—i.e., CSR ratings below the industry average—are more prone to improving their subsequent CSR behavior, and hence performance ratings, than those with small negative gaps, because of the desire to avoid being viewed as CSR laggards relative to their industry rivals. As a result, efforts are directed at enhancing CSR performance. Empirical support for this conjecture is found through random effect regression analyses of publicly listed firms in Korea that were rated by the KEJI (Korean Economic Justice Institute) during 2011–2015 with respect to multiple dimensions of CSR. Further results show that the positive effect of negative CSR rating gaps on subsequent CSR ratings appears only in the firms without well-established reputations, suggesting the possibility that firms with weak reputations have stronger incentives to keep up with other industry incumbents in CSR performance ratings than their counterparts. View Full-Text
Keywords: corporate social responsibility; CSR ratings; corporate reputation; Korean firms corporate social responsibility; CSR ratings; corporate reputation; Korean firms
►▼ Show Figures 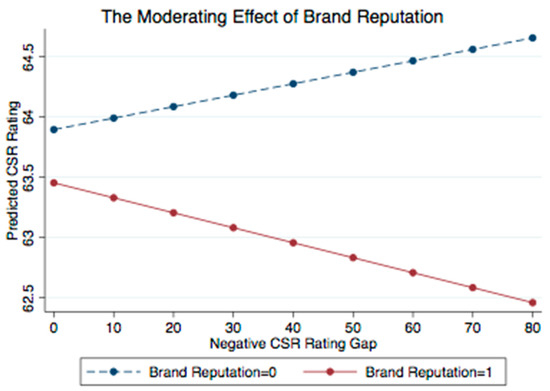