Strategies to Reduce Food Loss in the Global South

Understanding Grassland Degradation and Restoration from the Perspective of Ecosystem Services: A Case Study of the Xilin River Basin in Inner Mongolia, China

Ecosystem services (ESs) and their transformations in northern China play a crucial role in regional sustainability. During the past several decades, grassland degradation has become one of the most important ecological and economic issues in this region. Therefore, understanding the impacts of grassland degradation and restoration on ESs is essential for maintaining ecological resilience and social security of Northern China. Our objective was to explore the relationship between ESs and grassland changes induced by vegetation succession in the Xilin River Basin, Inner Mongolia, China. Using vegetation maps derived from remotely sensed imagery collected in 1983, 1989, 2000, and 2011, we calculated the degree of grassland degradation using the Grassland Degradation Index (GDI). Aboveground biomass (AGB), soil conservation (SC), and water retention (WR) were also estimated to assess ESs for each year. Our results show that: (1) GDI increased during 1983–2000 and decreased during 2000–2011 indicating that after experiencing two decades of severe degradation the grassland has been restored since 2000. (2) AGB and SC were significantly negatively correlated with GDI. Changes in grassland conditions significantly affected WR and SC with both declining during 1983–2000 and increasing afterwards. The increase of SC, however, was slow compared to AGB and WR, which is an indication of time lag in soil restoration. (3) Grasslands in the middle and lower reaches experienced worse degradation than in the upper reaches. (4) AGB and SC exhibited a synergy, while trade-offs existed between AGB and WR and SC and WR. In summary, significant changes in grassland ecosystems in the Xilin River Basin over the past three decades affected the dynamics of ESs among which SC and WR require special attention in the future. View Full-Text
Keywords: grassland degradation; ecosystem services; grassland degradation index; Xilin River Basin; Inner Mongolia grassland grassland degradation; ecosystem services; grassland degradation index; Xilin River Basin; Inner Mongolia grassland
►▼ Show Figures 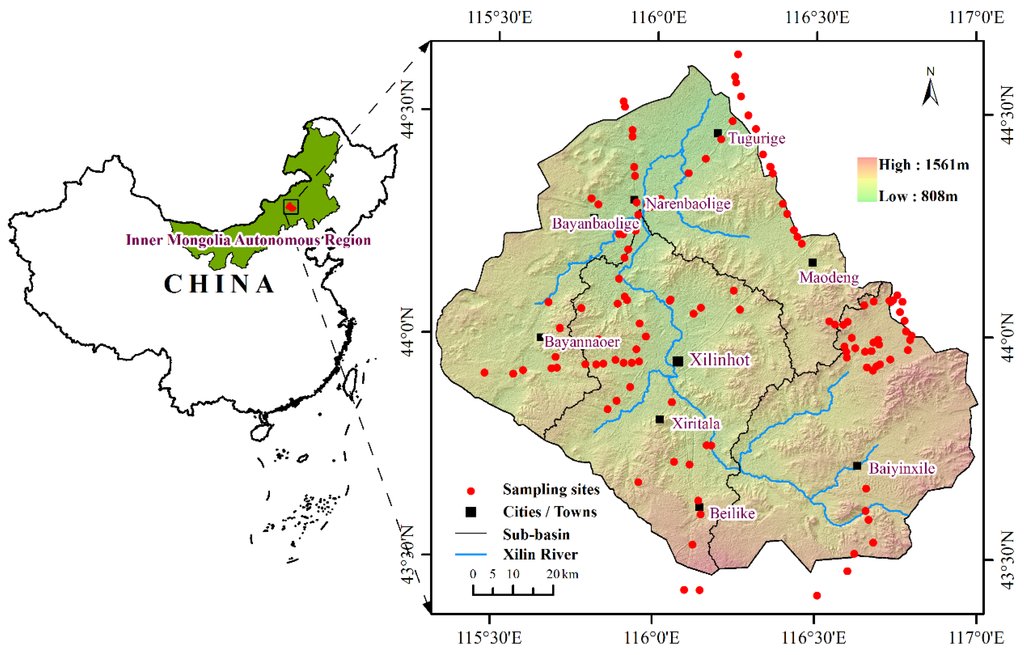