Growing Gardens in Shrinking Cities: A Solution to the Soil Lead Problem?
Next Article in Special Issue

The Building Fabric Thermal Performance of Passivhaus Dwellings—Does It Do What It Says on the Tin?

With voluntary and mandatory energy performance standards now becoming more common around the world, schemes to develop low energy buildings have become more apparent in developed countries. The Passivhaus standard, established 25 years ago in Germany, is one the most stringent and promising low energy building standards in Europe. It started as a construction concept applied to residential buildings, but has since spread as a voluntary ultra-low energy efficient standard to different parts of the world. Qatar, a member of the Gulf Cooperation Council (GCC) states, announced in 2013 the completion of the first Passivhaus project in the Gulf Region. The current and future performance of the Passivhaus project in Qatar was investigated in this study using current and future climate scenarios. Computer modelling was used to simulate the energy performance of the house and the thermal comfort of the occupants. In addition, on-site measurements were made to corroborate the modelling outcomes. Further, the impacts of climate change on the Passivhaus project was examined, and comparative analyses were undertaken. The findings suggested that the Passivhaus performs well under the current and the future weather data sets. Furthermore, the modelling indicates that the Qatar house is close to achieving the Passivhaus standard. View Full-Text
Keywords: Passivhaus; hot arid climate; energy and thermal comfort; climate change Passivhaus; hot arid climate; energy and thermal comfort; climate change
►▼ Show Figures 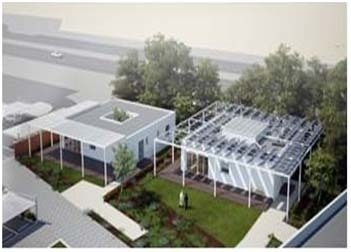